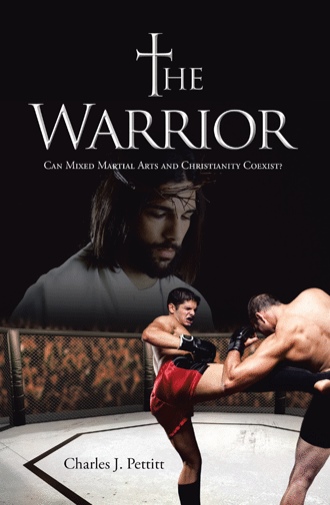 As the fighters walked to the center of the cage to get their final instructions, Joshua re-lived what he felt in his first karate tournament, nerves. Trying to remember his coach’s final instructions, Joshua never heard a word the referee said. The referee motioned the fighters back to their corners. “Are you ready?” The referee asked John. He nodded his head up and down. “Are you ready?” The referee asked Joshua. He too nodded his head up and down. “Let’s get it on”, the referee shouted, and the bell rang for all to hear. The fighters approached each other, extended their left arms, touched gloves, and circled to their left in orthodox fighting stances.
John initiated the action with a leg kick to Joshua’s lead leg thigh. The slap of the contact could be heard throughout the arena, as Joshua winced in pain. Joshua answered with his own leg kick that landed, but not with the conviction that John’s kick had. Joshua was nervous and tentative, not willing to fully commit to his techniques. This early in the fight, Joshua was not willing to take the risk of a counter attack.
As the first round progressed, both fighters traded punches as the feeling out process continued. Joshua delivered a lazy left jab, with no intent to do any damage. Because of the lack of intent, John was able to counter with a straight right hand, over Joshua’s left that landed flush on Joshua’s nose. Joshua’s vision went black for what seemed like ten seconds, though it was only a split second. He instinctively backed up as John landed another right and then a left to Joshua’s face. Joshua was in trouble and he knew it, but seemed helpless to do anything about it.
Joshua had had his bell rung many times during sparring sessions back in Albuquerque, but those sessions were controlled. Once it was deemed a fighter was hurt, the sparring partner was not allowed to continue the assault. This was different, this was for real, and there would be no letting up.
Joshua raised both hands to the sides of his face in a desperate response to protect himself. John now had Joshua up against the cage and was pummeling him with a barrage of punches. A thought of quitting, flashed into Joshua’s mind, but he ignored it. Reacting purely on instincts, Joshua was able to reach out and get John in a clinch. Maybe this could buy him time to clear his head he thought. Joshua spun John around and now had him pinned up against the cage. Joshua’s knowledge of “dirty boxing” would help him now as he controlled John against the cage. Joshua threw enough punches to keep John from countering; he covered up his face and tried to protect himself. As the final seconds of round one ticked off, Joshua was pretty much out on his feet though he was able to fight back purely on instinct. After the bell rang, Joshua stumbled to what he thought was his corner, as his coach, Mr. Newman, grabbed him by the arm and helped him to his official corner and sat him on the stool inside of the cage. Joshua’s trainer poured water on his head as Coach Newman wiped the blood from his nose. A third corner man placed an ice pack on the side of Joshua’s face, where swelling had already appeared.
“Joshua, Joshua, can you hear me?” Coach Newman cried out. Joshua opened and closed his eyes several times trying to focus on his coach. The trainer removed the ice pack and applied end-swell as Coach Newman continued his desperate plea to get his attention.
“Seconds out”, yelled the referee as the bell for round two was getting ready to ring. Joshua’s vision had become clearer, though there was a loud spinning noise, like the sound of a drill, in his head. Joshua stood up as the stool was taken out from under him and out the cage. Joshua could see his anxious opponent across the cage, looking like a caged lion. Though not completely normal, Joshua’s legs were stable, as he approached the center of the cage. The bell rang and Joshua circled left.
John, speculating that his opponent was still hurt, quickly approached him. However, not wanting to throw caution to the wind, John hesitated as he reached Joshua; respecting the fighter in front of him. Joshua, wanting to regain full consciousness, delayed engagement by throwing long range jabs as he continued to circle left, thus keeping plenty of distance between him and his opponent. John carefully chased Joshua, but was unable to land any significant blows.
By the middle of round two, Joshua had fully recovered from the first round pounding and was reaching his fighting rhythm. For the first time in the fight, he was feeling comfortable and able to predict John’s movements and techniques.
Being able to predict his opponent’s movements and techniques was a gift, according to Coach Newman. He had only seen one other fighter that had this gift, and he was a boxer. Like a batter anticipating the pitchers next pitch, this gave Joshua a huge advantage over his opponent. This was not a learned technique; it was purely a God given gift.
John, fighting from an orthodox stance, throws a left jab. Knowing the jab was coming, simultaneously Joshua, also fighting from an orthodox stance, delivers a karate text book front leg roundhouse kick to the side of John’s face. Not your typical mixed martial arts kick, it surprised John, as he left his right hand guard a little low. Joshua’s instep landed flush on his John’s temple. His legs gave out immediately and he dropped. He was knocked out before he hit the canvas. As he was taught, Joshua rushed to inflict additional punishment, but the referee was able to jump in front of Joshua before he could. The fight was over; Joshua had won his first professional MMA fight.

“The Warrior” brought back many memories of the past in my life and some current day battles I still face. As a former UFC and Pride fighter I faced many of the same ridicule and resistance from the “Religious” community and personal friends. People would ask me daily how I could be a Christian yet get into a cage and battle. The sport then still banned on Network television and the political resistance of it becoming a mainstream sport made acceptance difficult. This book helps explain how God uses his followers in all areas and aspects of life not just in Church. I have always thought I was used to spread the glory of Jesus and had a captive audience every time I fought. It was an opportunity to spread the Love of Christ in what could be a dark place. A chance to give God the glory for my victory’s when the microphone was handed to me, and quote a scripture verse pointing my finger at Jesus and not myself. Physical Sports such as MMA are no different than going to school as a teacher. It’s an opportunity to give God the glory, and profess your love for an awesome God. “The Warrior” is one more way we as believers can help others have the piece that we all need. I highly recommend this book to all!”

Ron Waterman, first WEC super heavyweight champion and former UFC, WWE, Pancrase and Pride Fighting Championship professional fighter. Ron is the Author of “Tapped Out by Jesus” from the cage to the cross.

Charles J. Pettitt is the head instructor of the Christian Karate Academy in Albuquerque, New Mexico. The Warrior is his second book, preceded by Lukewarm Christian to Warrior for Christ, published in 2011. Charles and his wife, Lupe, live in Albuquerque and attend Family Worship Center.