US Merchant Mariner's WW II Diary: A Small Window of Tens of Thousands 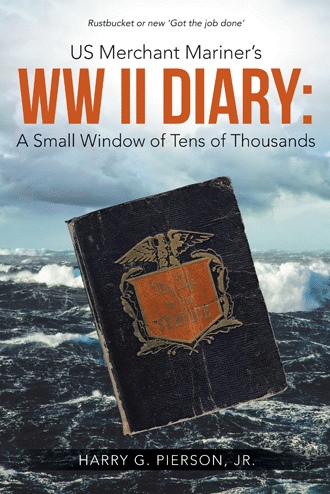 The men of the US Merchant Marine and US Navy Armed Guard for merchant ships, shipmates throughout World War II, lived and worked together aboard ship during the voyages as a team for a common purpose, to defeat the enemy and win. The deck and engine merchant crew manned the ship and the navy armed guard defended the ship against enemy action, as a team serving their country with courage and distinction. Merchant and navy seamen serving aboard thousands of merchant ships world over had their lives on the line as a vital part of the World War ll logistics of transportation, transporting troops, equipment and material and conducting wartime offensive and defensive operations in pursuit of the enemy. The naval armed guard serving as the US Navy’s branch for the military defense of all merchant ships included nearly 145,000 officers and men, made up of gunners, radiomen, boatswain, (bos’n) signalman and in a few cases pharmacists, sailing on over 6000 merchant vessels, worldwide.( 3 ) Armed guard daily drills sharpened expertise, manning the ship’s five inch and three and one half inch cannon and twenty mm rapid fire anti aircraft machine guns. Readiness assured maximum protection to defend against enemy submarines, aircraft and enemy surface raiders; German merchant ships,( 4 ) initially disguised as an allied non-combatant, suddenly removing their undercover disguise and changing into an attacking surface raider vessel. Most of the merchant marine crew trained with the armed guard as their second duty on board ship to serve as a backup for wounded navy armed guard, the exception being merchant crew on watch duty to man the ship. And then thinking of a foreign harbor as a safe haven, some foreign harbors indeed posed a serious threat, the enemy during the night hours would attach explosive mines to the vessel’s hull while lying at anchor.

Unbelievably massive and incredible World War ll demands were made upon the United States, economically and geographically, to supply and quickly move troops, equipment and materials of war. From the United States to European and Pacific war theaters under the direction of the U.S. Government War Shipping Administration, indispensable and extraordinary needs were fulfilled in mass transportation. Recounting the days of WW II some 70 years later a merchant mariner is constrained to more than re-count maritime history as a veteran in an increasingly closely knit interdependent world, to draw a parallel of today as related to the 1940’s. Reason why in today’s modern high tech world anyone would find interest in the WW II experiences of a seaman and his shipmates considering the current interest in our technology of the atom, computer, internet, global positioning system, nuclear powered aircraft carriers, to name a few. The interest just might be in the history of the most significant, complex and technological successes, the first account of notable merchant marine actions that in a small part helped to bring about and account for the victorious conclusion to the tragic World War II of the 1940s. All enabling and directly related to our culture of today. The high sea actions and the courageous dedication of the allied nations transitioned mankind from a brutal and dictatorial, unimaginable and merciless chaos, to an internationally free world. A world of an enduring time of peace that is free of enslavement. And then secondly, the obvious parallel: what of today, USA capability and the question of our allies, who are they? And who is the enemy? What is the direction of our great nation and what is our foreign policy, our known history of compassion for others and our future? The why of writing so many years since WW II lies in the belief that bringing to light previously untold WW II sea action will add another chapter, a bit more stirring sea drama, a unique, factual story of mystery, intrigue, and the near undoing of a voyage that possibility involved undercover sabotage. Another small door opened of the war time experiences of seagoing men and their shipmates. This is the personal diary of the maritime history of HGP, awakened and brought back after many years, the forgotten gray area of the men of the WW II merchant marine and their naval armed guard shipmates, an indispensable team and forged chain, happenings that otherwise would be lost in time.

The WW II Diary of a US Merchant Mariner brings to light previously untold WW II sea action and the wartime experiences of a few seagoing men, their ships, and their voyages. The diary includes high-seas action, drama, and a bizarre event that needs to be told for posterity.

The story opens another small door into the lives of the seamen whose stories had heretofore rested dormant and gathered dust. The men of the Merchant Marine and the Navy Armed Guard, who comprise a forgotten gray area, forged a strong chain, and proved an indispensable team in the course of WW II. The narration here gathers together personal significant events of maritime shipboard action, and will provide insight and resources for future generations concerning how the US fought the way to victory.

Based upon the WW II wartime voyages of the merchant ships listed in the introduction, the story also relates the daily activities recorded within the ships’ log books, several forms which were consulted for this book.

A ship’s secret log book is maintained by the ship’s master, and subsequently is administered by the US Navy. The secret log, a wealth of information, contains voyage routes, ports of call, ship events, and records of longitude, latitude, and enemy action. In addition, the Naval Armed Guard commander also kept a daily log book of the armed guard service activities. And last, the official log book for ship activities and the merchant crew’s welfare and affairs, was kept by the ship’s chief mate. It was required by federal law and provided by the US Coast Guard. These and other records can be found shelved at the Naval District US Government Archived Files.

Harry Pierson, Jr. is a registered profession engineer, retired, who has worked for major consulting and engineering firms, in the steam power generation, petroleum, and pulp-and-paper industries for over thirty years, in the United States and Canada.