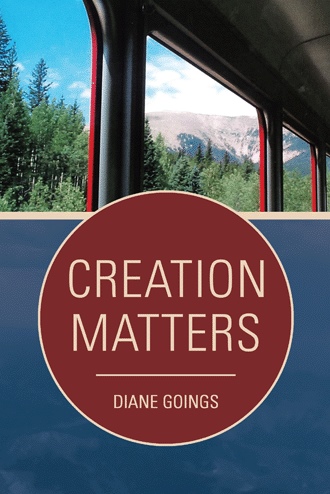 “Behold, He is coming amid the clouds, and every eye will see him, even those who pierced him.  All the peoples of the earth will lament him” (Revelation 1:7).  The sandstone cliffs extend the breadth of the peak; an array of white the clouds disperse allowing all present to catch sight of Jesus Christ the King at the top of a high mountain.  “There the Son of Man wearing an ankle-length robe, with a gold sash around his chest.  The hair of his head was as white as white wool or as snow, and his eyes were like a fiery flame.  His feet were like polished brass refined in a furnace, and his voice was like the sound of rushing water.  In his right hand he held seven stars.  A sharp two-edged sword came out of his mouth, and his face shone like the sun at its brightest.”  (Revelation 1:13-15)

The Landowner on horseback descends from the mountain heights on his way to her family’s home just east of the Mississippi River.  O woman, I follow the path from the mountaintop along the pastures of the cattle and the newborn calves near the settlement, journeying onward over the mountains and across the plain to see your face again.  His golden Arabian stallion descends the mountain with him.  The lone rider, Jesus Christ follows the dirt roads leading into the rustic terrain, crossing a narrow covered bridge situated seven miles west and seven miles south of a nearby Indian village.  Jesus on horseback ambles down a washed out country road filled with potholes and deep grooves.  The whole area covered in pebbles, fallen trees branches, and debris from the storms.  Jesus pastures the horse, in the current day, near a fenced-off field near the old weather-beaten chicken coop now serving as a supply shed for the pigpen.

Upon arriving home, Jessica’s communion with Father continued, an extraordinarily remarkable event unfolded before her.  God the Father speaks within the recesses of her thoughts, more or less within her cognitive reasoning, a clear rational thought that resounded within her conscious.  He affirms her acceptance into his Kingdom and establishes her identity as one of his children.  Jesus kaleidoscope viewpoint of past, present, and future events and his relationship with Jessica begins.

Jessica within her thought contemplates Jesus Christ the King of Kings sitting upon his golden white stallion moving on without her.  She grabs a hold of his arm within her thoughts.  He reaches for her, and lifts her now childlike frame into place in front of him.  Jolting a bit, upon the horse they begin to move forward.  Ever so gradually, she enters into her new life.  Opening her eyes, Jessica remains in the world.  To others apparently no different but changed profoundly within, now walking hand in hand with God.  Jessica grows a little each day, advancing in wisdom, knowledge, and understanding with the Holy Spirit as her mentor, developer, director, and companion.

An almost a silent whisper within the depths of her soul instilled his perception of her life, past, present, and future.  Over the months and years that followed.  The Holy Trinity continued to interact with her.  This is their story and their walk through the social problems of today.

In the beginning, when God created the heavens and the earth—and the earth was without form or shape, with darkness over the abyss and a mighty wind sweeping over the waters—God said: Let there be light, and there was light. (Genesis 1:1–3)

Are we infringing on God’s turf like the angels who tried to overthrow heaven? Where do we draw the line as to what scientific matters belong to man and what is God’s territory alone? It is not the theory that matters but belief that God is all-powerful and had the ability to begin it all through whatever means, perhaps something we have yet to conceptualize.

Faith, science, and social problems intersect, collide, and join forces in Creation Matters, Book 01 of the Beautiful Justice Series that follows a personal yet fictionalized story of faith, love, and social concerns. These social concerns reflection books are be read alongside Holy Scripture and are designed to bring you into those ancient texts for an understanding of God’s love for the world.

Diane Goings, a community volunteer for many years, returned to the classroom in her 40s. She attended Diocesan Lay Ministry Formation, Benedictine University, Saint Louis University, and Notre Dame STEP and began tucking away material for her books. While serving as lay minister of the Catholic Church, she started two classes for the developmentally disabled and a social concerns committee. As an advocate for the poor and disabled, Diane lobbied with Bread for the World for UN MDG and SNAP funding.