In the Shadow of His Wings 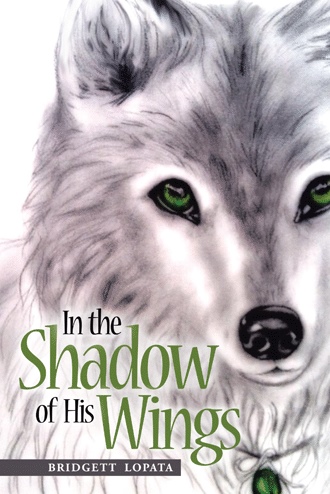 A few moments later Viktor spoke, “Look up there Kate,” he said pointing with his wing. Kate saw that his eyes were fixed on a distant archway made of blossoming trees. As they drew closer she could see that the arch was about eight feet tall and five feet wide. The two trees formed a symmetrical entrance, their branches meeting in the middle.

Kate hesitated as Viktor walked through the archway.

“You don’t need to be afraid, child,” he said again.

Kate exhaled and followed Viktor through the opening. She looked around at the place she had just entered. The same thick carpet of grass covered the ground. They were in a small clearing surrounded by large, leafy trees. The shadows of the trees fell on the ground making it much darker there than in the open clearing they’d just left. Kate felt that it was a very private, sacred place; certainly not somewhere that you'd enter without permission.

“Come, Kate,” Viktor said gently. Together they walked a few short steps to the edge of the pool. A strange colorful mist seemed to float above the water, but it slowly disappeared as they reached the edge. The pool was strange. There was no reflection of the trees or sky or mountain in it. It was so still and flat, and looked so little like water, that Kate thought for moment that she would be able to walk on it (had she the courage to test it).

“Kate, are you ready?” Viktor asked.

Kate nodded. “What exactly will I see when I look into the pool?” she asked him for the first time.

“You will see two images.” said Viktor kindly. “Both of them will show you an image of your soul. This, Kate, is the magic of the pool. It shows nothing of what a person looks like on the outside, but only what is on their inside.”

Kate looked into Viktor’s eyes again. “How come I will see two pictures?” she asked. “The first image you see is what your soul looks like without my presence living in it. Kate, it will be a sad and sorry picture, but you must truly understand what it is to be without me.”

“So what is the second image then?” Kate asked.

“Are you ready now?” asked Viktor.

Kate slowly nodded her head again. She walked to the edge of the water and looked down.

It was dreadful, far worse than she could have imagined. The image frightened her, and her breath caught in her throat. The pool reflected how her soul looked by showing her a picture of her outside, as Viktor had called it. She wore torn and ragged clothing. Her reflection looked worn out, pale, and unhealthy. She was little more than skin and bones. Her skin had a gray-green tinge to it. Scars, bruises and cuts covered her. She looked, to tell the truth, like a zombie from a horror film. However, none of these things (bad as they were) shocked her as much as the look in her eyes. Kate saw fear, pain, and heartache reflected in them. They were a washed out gray color. As she continued to watch the reflection she saw a person who was broken, rejected, and unloved. Tears filled her eyes as she saw that no hope or life glimmered in the eyes of her soul image. The pool reflected a person who was completely lost and alone.

Kate couldn’t bear it any longer. She turned away, her hands hiding her face. “I know,” said Viktor in a sad voice. “But there is always hope, that is why I am here.”

Kate looked up at him. There was love shining in his eyes.

“With me,” he said, “there is a different picture.”

Kate reached up and put her hand in his fur as she turned to the pool again. She was strengthened but his presence.

Her reflection in the pool began to change. It was as if she was watching a scene from a movie as first the paleness of her skin started to darken. She no longer looked deathly white; and the gray hint in her skin was gone. Kate's soul image stood straighter, it no longer looked like her reflection self had traveled for days on end carrying a heavy burden. The next thing that happened was that the cuts began to heal and the bruises began to fade. Her skin was knitting itself back together. Soon everything was smooth. Her reflection was no longer skin and bones. Kate no longer wore dirty and torn clothes. Instead she was dressed in a fresh and beautifully made robe. But best of all was the change that occurred in her eyes. They no longer held the pain and sorrow that had been there before. Her eyes shone with light. They danced, and radiated peace. These eyes belonged to someone who had God living inside of them. For Kate knew that this change was of Viktor only. She no longer looked lost and alone. She had been found by the Great and Mighty Savior. Kate saw a soul that had been healed of the holes and tears inflicted upon it by the sins of herself and the sins of others, and the doing of the evil one.

She stared for a long time at the image. She was beautiful and she wanted more than anything to stay like this.

"How can my soul be changed?" Kate asked.

"That is simple," said Viktor. "You must choose to let me into your life. Surrender yourself to me. I will be your king, your father, and your friend, and I will change you from the inside out."

Kate is lost and broken after her sister’s death. Now she is fifteen years old and trying to find her way through the guilt and hurt that surrounded that horrible day. Nothing changes until she walks through a door that leads her to another world.

The world in which she entered is cruel. Voices that whisper in the air confirm her worst fears and thoughts. They attack her and deceive her. Soon Kate learns that voices belong to creatures, and that the creatures are more than just beings. They are in fact concepts in living forms: lies, guilt, and hate.

Just as Kate starts to believe that all hope is lost, she hears another gentle voice; a voice full of love and promise. Finally Kate asks for help and her journey begins. Viktor (who portrays Jesus) guides Kate into Orus, a world full of other creatures. Along the way Kate meets redemption and grace and love along with many other beings that show her the way of truth.

Bridgett Lopata lives in Colorado. She grew up in a Christian home where animals where often her best friends. Bridgett loves to read and draw. Many of the characters in this book are inspired by her drawings, including the image for the cover art.