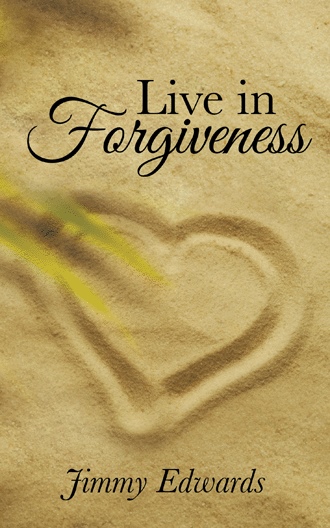 On August 12th of 2013 I got up as usual and entered my “man cave” to get my day started. For the past couple of weeks I had adopted this regimen; I would turn on the computer and bring up the web page of two songs that are very close to me. After listening and singing and worshiping the Lord I spent some time in prayer. My heart was turned towards the Lord and I poured my heart out to Him. But this day seemed different and I altered my usual pattern and lit my candle. When I light my candle it means that all I want to do is have some “me” time with my Father.

At first I was quiet and to be honest I sensed that I should remain silent. The usual “I thank You Father and how much I loved Him” wasn't there. So I stared at the candle waiting and I didn't wait long. Although I didn't speak, the Father had something to say to me! He said. “Live in forgiveness!” While I was trying to process what He had just said He had a follow up statement that hit me down in the depths of my heart. He said, “I had confidence in my love.” Seeing the prodigal son walking towards his father immediately flashed into my mind. At the same time I fully understood what He was telling me. It was like He was saying, “I love you!” His love for me gave me new birth and He was going to complete all that He had planned for my life as His son.

I began to experience great joy and I couldn't stay seated. I was walking around with my hands lifted thanking Him. I knew that I was saved and I even understood that He was my Father. But for Him, God the Father to tell me personally THAT HE LOVED ME was something so awesome it’s hard to describe. This is how Jesus must have felt the day God the Father spoke, “this is His beloved Son, in whom I am well pleased.”

I wondered how many others, children of the Most High God, are not living in forgiveness. To know truly that He loves you to the inth degree. To understand that He wasn't satisfied with just salvation; He wants to complete in their lives all that He had planned for them before they were born physically and spiritually.

There must be more than myself or my Father wouldn't have given me the assignment of writing this book. I never had a desire to write a book. I was the one who bought the books not write them! I don’t have the scholastic background that I can draw on to produce such a book. I use to joke with a braggadocios tone in my voice, “Yes I've got 36 hours of junior college but I don’t like to brag.” What I do have is faith, not my faith but the faith that the Lord has given me, confidence in Him that inspired men to write the whole Bible.

This is truly a work from the Lord. I had never had a desire to write a book. This all changed August 12, 2013, when the Lord spoke in such a way that I knew what His desire was for me.

In this book, you will read of true-life situations. You’ll read about how God used two mothers to raise me, one who birthed me and made the hard decision to give me up for adoption. The other mother prayed and asked God for a son and promised Him that she would raise him up in fear and admonition of Him. Through the adoption process that I went through, we can learn how we are adopted into the family of God.

You will also we see how a real dad takes care of his children and the day the Lord introduced me to my Father in heaven.

This book is written in obedience to help us understand church terms that we don’t really understand. By using easy and practical illustration, you can have an understanding of new birth or born again and how it is done, adoption, the full meaning of “the cost of our salvation,” and much more.

If this book blesses you, please give all the glory to God, for He is one who planned this story from the beginning of my life.

Jimmy Edwards is the pastor of Rays of Faith, Tabernacle in the Kissimmee, Florida area. He is married to Winnie Greasham Edwards, and they have four children and seven grandchildren. He has been in the ministry since 1994 in Kansas and Florida.