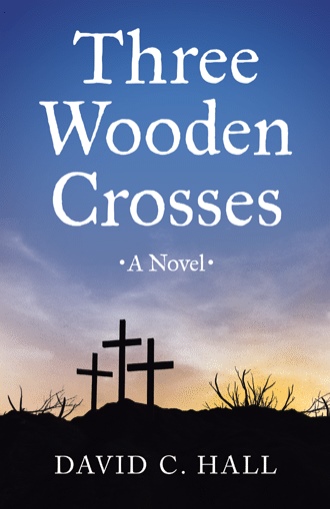 1962
The anguished eyes stared vacantly at him through the black mix of sand, salt water, and blood that had formed a mask over the soldier’s face. He reached to grab his canteen so he could provide the young man one last drink, but as he turned, the soldier grabbed his collar with his last bit of strength, pulled him down to his face, and whispered into his ear. The grip became stronger around his neck and he could not break free from the soldier’s grasp. He struggled to push himself away but each time he released himself the soldier reached out with the other hand. He struggled to stand, but found himself nose to nose with the dying young man, and suddenly, the soldier screamed.
With the scream Matt awoke with a start from his nightmare. His shirt was soaked and perspiration dripped from his forehead and his palms. There was nothing he could do; he was in the throes of a full-blown panic attack now. Slowly he moved his gaze around his dark bedroom. He was thankful when he saw Max’s understanding eyes looking at him and felt Max’s reassuring paw being placed on his knee. The next few minutes were going to be miserable and Matt did what he could to lessen the impact of the onslaught of darkness. He closed his eyes and drew a deep breath through his nose. As he exhaled he began to recite aloud,

“The Lord is my shepherd: I shall not want.
He maketh me to lie down in green pastures: he leadeth me beside the still waters.”
He started to breathe heavier, yet shallower, and struggled to continue the psalm. It was the only thing that had ever worked to ease the process, but tonight, the attack had started while he was asleep. He had no control over its beginning, which meant he would have little control over its finish.

“He restoreth my soul: he leadeth me in the paths of righteousness for His name’s sake.”

He was shaking now and sharp pains moved like pin pricks up and down his arms and legs. He wrapped his arms around himself and sat on his bed pulled up in a little ball. He rocked back and forth while burying his face into his knees. Max laid his head on his paws as he stretched across the floor, and fixed his sympathetic eyes on his loving master.

“Yea, though I walk through the valley of the shadow of death, I will fear no evil:…”

With those words came the tears. At first, Matt’s eyes simply filled with glossy moisture, but within seconds, large drops were forming and running down the sides of his face and off the tip of his nose. He tried to control the sadness, but with every attempt he made to stop the emotions, he only sent himself spiraling deeper into the abyss. He was gasping for breath through his loud sobbing and, now yelled the next words of the Shepherd’s psalm.

“…for thou art with me; thy rod and staff they comfort me.”

He was spitting as he yelled the words, and now, the sadness was being accompanied by anger. He stood. His feet hit the cold, hard wood beside his bed with a hard thud. Max jumped to his feet and took a couple of steps back. Matt put both his hands to his temples and pulled them backward over his sweat drenched hair. As he pulled back he fixed his gaze on the ceiling and yelled with all he could muster,

Weak, he fell to his knees. He leaned forward and rested his elbows on the wood in front of him. He placed his forearms flat on the floor and pushed his forehead into his arms. He breathed in deeply through his mouth, allowing his back to arch, giving his lungs the full ability to expand and receive the surging volume of air. This time he exhaled slowly through his nose. Max low-crawled the two feet dividing him and Matt and placed himself on Matt’s left side, touching the full length of Matt’s prostrated body on the floor. In a barely audible whisper Matt continued,

“Thou prepares a table before me in the presence of mine enemies: thou anointest my head with oil; my cup runneth over.”

He snickered to himself. Max acknowledged the new sound by raising his head and cocking it to one side. His ears moved up and down independently of each other, making him appear inquisitive and anticipatory for the changing mood. Matt remained on his knees and stretched out on his arms in front of him. He sniffed with nearly every breath and wiped his face against the sleeves of his now-soaked t-shirt. The room remained silent, except for Matt’s sniffles and Max’s panting.
Matt reached over with his left hand without raising his head, and found Max’s left ear. He cupped the ear and scratched gently behind Max’s head. Cautiously, he raised his head and pulled his legs underneath him. He turned and rested his back against the bedframe and put his legs out in front of him. He stretched his neck by turning his head from side to side, closed his eyes, and leaned his head back until it lay flat on the mattress. Max stepped closer so Matt could reach him better. Matt, instinctively, reached out with his right hand and cradled Max’s face in both his hands. He picked his head up and placed his forehead on Max’s head and looked into his eyes. Softly, he whispered,

“Surely goodness and mercy shall follow me all the days of my life: and I will dwell in the house of the Lord forever.”

The Blossom Dairy Diner sat on the edge of the city limits. It was a perfect location to cater to those folks going into town for business and others leaving town to work in the rail yard and the factory. The diner had started out of a Silver Stream trailer and over the years had evolved into a single story building with a glass window front. Most customers sat at the long ivory colored bar in chrome seats with sparkling red vinyl tops. But the few patrons that wanted conversation with their meal enjoyed the matching tables and chairs intricately positioned in the small area to the left of the bar.
Joe sat at one of the tables looking out the diner’s front windows. He was not able to sit with his back to the door. If something off kilter was going to happen, he was going to see it first. He sat tapping his watch and would only stop long enough to take long drinks from his mug of dark black coffee. Naomi sat across from Joe and watched him look over her shoulder and out the windows. She would catch his eyes with a smile and he would try to fashion his lips into a smile in return, but was only half successful. He would tap his watch a couple of times a bit harder, shake his head, and take another drink of coffee. Naomi reached across the table, placed her hand on Joe’s, and patted it gently. “He is just running behind this morning, Joe,” she said, “Don’t worry. He will be here soon.” No sooner had she finished the sentence, than a dark green pickup pulled up in front of the diner and Joe could see Matt in the driver’s seat. Joe sat up straight and stretched his shoulders by putting his hands on his lap and pushing down. At the top of the stretch he gave a sigh of relief and said, “Finally, we can eat.”

David Hall’s freshman work places the reader with three friends in a small, west-Texas town in 1962.

A farmer must face the harsh reality of a son who longs for a different life and a farm that is failing. A teacher works to free her students from the grips of factory work so their dreams may be realized. A preacher struggles against the demons of war and the darkness of doubt to find his way back to God.

All three must work together to help a young girl who arrives in the small town with lots of baggage and a secret of her own. Their only hope to show her God’s love and forgiveness is to accept it for themselves before she runs again. Find out if they are successful in time in Three Wooden Crosses.

David Hall, a seminary student at United Theological Seminary, currently works as an analyst for the Department of Veterans Affairs. After his own crisis of faith, he came to question and to better understand his relationship with God. His hope is to be a chaplain for United States veterans. He and his wife, Alicia, have three children and live in Murfreesboro, Tennessee.