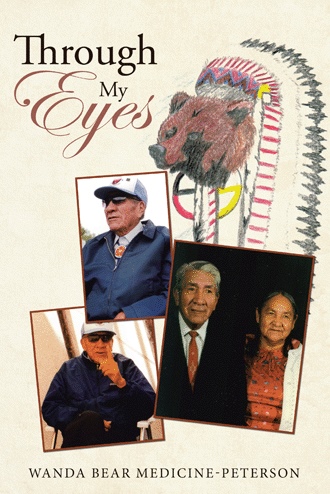 My book is a type of biography of my father, Joseph Bear Medicine, a Native American from the Blackfeet Nation. This book gives some incites into the life of a man who lived through prejudice yet lived another type of life that is looked at as a little peculiar to the society that live in this world and lived it to its fullest even to the end of his life. He possessed it so fully that he taught his children of his belief and anyone else that would listen. My Dads’ belief was so strong that the only way he felt he could prove it was to live it and he did.

My name is Wanda M. Bear Medicine-Peterson. I am an enrolled member of the Blackfeet Nation located in Browning, Montana. My parents are Joe and Marie Bear Medicine. I am married to Bailey Peterson and we have 2 daughters, Ember and Kyra. Ember married Frankie Kipp, they have 2 children, of their own, Donald Bailey, and Frankie Delayna Laura Marie. Ember had I child prior to this marriage, his name is Talon Bearmedicine U., Frank had children also prior to this marriage, their names are Ronel, John, Donna, and Beatrice. Kyra married Virgil Mad Plume and they have 2 daughters, Vrystin Meraylee and Virlayna Marie. I lived in the small community of Starr School, about 5 miles northwest of Browning up until I married. I went to school in Starr from first grade to sixth grade and then we were bussed to Browning there after. I became a born again Christian during 1 of the times we had daily vacation Bible school. I remember, because I prayed and asked the Lord to come into my heart and be my Savior and He did. I also remember who it was that lead me through that prayer of repentance, it was Sis Raw Eater, the wife of our Pastor Dick Raw Eater, whom were there as pastor and family. I was 8 years old, but I remember it as if it just happened. I stayed in and around Starr and joined my brothers group of traditional singer, drummers and dancers. We were called, “The Young Grey Horse Society.” I moved a few times to different places within my state and attended school. I also worked at some of our local businesses. I was raised in church where I learned about Jesus. Sometimes we wander on our own, and I did that too, for awhile I missed church services, but I always knew that I should be there every time the doors opened. I thank God that I had parents who knew the truth and prayed for me. I also thank all those people who were part of my life. I now live in housing project, Glacier Heights, located just north of the town of Browning. I became handicapped in 1990 with 3 total hip replacements, Migraines (which I rarely get now praise the Lord!) and arthritis, but I leave all this in the Lords’ hands and He gets me through each day. The Lord has blessed me with this life I now live and I believe I can truly say I am happy. I thank my husband for being here with me when ever I need him, my daughters and their husbands and children. I am thankful everyday to think of all of you out there who took time to pray for my reservation, also those who actually came here and shared the Word of God with my people. To my brothers, sisters, uncles, aunts, cousins, nephews, nieces, etc. I love you and I thank you for being my family. God bless you and I pray that He will guide your decisions and futures.