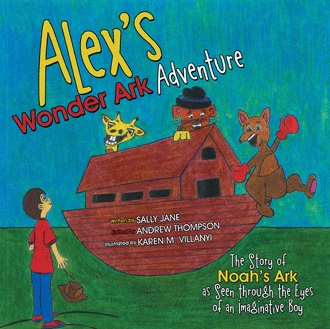 Then Alex came upon a tall yellow ladder;

he certainly had to climb up after!

As he was climbing to the top,

“What will I spy?” he thought!

Now he noticed some winding stairs,

which howled and shrieked strange noises into the air!

Each step, and every bend,

There was a different funny noise until he reached the end!

Alex started to pet the animals

and gave them lots of treats!

Wishing he could have just one

to take home and keep!

This is the story of Noah’s Ark as seen through the eyes of a young boy named Alex. This fun adventure of imagination and exploration takes the reader on a journey of discovery through the halls of the Ark, where Alex finds a love for the many amazing animals in God’s creation. Along the way, he learns the true value of God’s love in this wonderful retelling of one of the most magical stories in the Bible.

“There is nothing better than a good story before bed—especially when that story is from the word of God. Follow Alex through a mixture of whimsy and Scripture that is sure to write a familiar story upon your heart as it has done mine.”

I have been a teacher for preschool, Sunday school, and vacation Bible school and have taught choir for children ages three to five. I also have four children of my own and three grandchildren that inspire me every day! I reside in Northglenn, Colorado, and attend New Destiny Christian Center.