In My Own Words

A Summary of the Chapters of the Bible 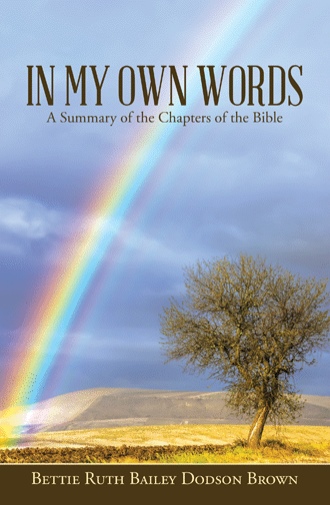 Matt. 2 – (1) Jesus is born and the wise men from the east, saw the star and came to Jerusalem to visit him; (2) they ask the people where he was; (7) Herod told them to come back and tell him where they found Him; (9) the star led them to Bethlehem where Jesus was; (11) they presented gifts of gold, frankincense and myrrh to Him; (12) then they were warned in a dream to return a different way and not go back to Herod; (13) then an angel appeared to Joseph and told him to take the child and Mary and flee to Egypt; (14) he did so; (16) Herod was angry and had all the male children from birth to two years old killed; (19) when Herod was dead, the angel appeared to Joseph and told him to go back to Israel; (22) he did so but was told to go to the region of Galilee; (23) they lived in Nazareth.

Matt. 3 – (1) John the Baptist started his ministry to prepare the way for Christ; (4) he was clothed in camel’s hair and a leather belt, and he ate locust and wild honey; (5) he taught and baptized people; (13) then Jesus came and John baptized Him; (16) the heavens opened and God said, “This is my beloved Son, in whom I am well pleased.”

Matt. 4 – (1) Jesus was led by the Spirit into the wilderness and fasted forty days and forty nights; (3) He was tempted three times by the devil; (12) John was put in prison; (13) Jesus left Nazareth and lived in Capernaum; (17) He begins His ministry; (18) He chooses Peter and Andrew to follow Him as apostles; (21) He selected two other brothers, James and John; (23) Jesus went about all Galilee preaching and healing the sick; (25) great multitudes followed Him.

This is an abbreviated Bible commentary. It is an easy-to-understand study of the scriptures. Chapters are separated, and a semi colon separates subjects within the chapter. This shows Biblical text that is sometimes taken for granted and overlooked.

I was born on November 12, 1932 in Quanah, Texas. I had 3 sisters and one brother. One sister (second child) was deceased at eleven days old, and one just older than me at the age of four.  I was baptized into the Church of Christ at age twelve, and have attended faithfully since then. I started to school in Winters, Texas, and  attended grade school in Quanah, Texas. I graduated from Bowie High School in Bowie, Texas, and attended Abilene Christian College (later university) for two years. I married Lindel H. Dodson in 1952, and had one son and one daughter. He passed away at the age of fifty two. Both children are married and have families, and live fairly close to me. Between them, I have three grandsons. The oldest just married and gave me my first granddaughter. In 1989, I married James W. Brown, and he passed away in 1997. I was in my last house for forty years. When I got tired of the upkeep, utility bills, etc., I sold my house and moved into a senior living facility near the Memorial Church of Christ, where I attend. I am also across the street from one of the largest malls in Houston, Memorial City Mall. I keep busy doing Bible work, and hand work. This book became my pride and joy. I only hope the people who read it enjoy it as much as I enjoyed writing it.