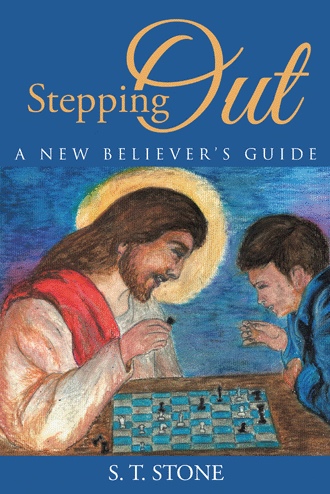 Self-deprecating and disarmingly humorous, Stone shares the results of his personal study of the Bible, digging into Scripture and frequently drawing homespun biblical applications from his own life in order to clarify some truths about faith. Stone admits he didn’t set out to write a spiritual autobiography, but that’s more or less what his book is, and it’s the book’s greatest strength for both newcomers and lifelong Christians. —Kirkus Reviews

Spiritual conversions are as varied as snowflakes. But once the initial excitement fades away, a new convert is faced with a dilemma: “Where do I go from here?” This book attempts to answer that question.

The first part of Stepping Out was inspired by the Old Testament quotation, “Can two walk together except they be agreed?” Amos 3:3 (KJV). It will show that

- God the Father intends for us to be like Christ;

- God the Son enables us to be like Christ; and

- God the Holy Spirit empowers us to be like Christ.

The second part of the book discusses seven things that all believers should hold fast to no matter where they are in their spiritual walk:

3. Know that Christ has saved you and that you are a child of God.

4. Know that you must come clean.

5. Know that God will protect you.

6. Know that Christ will come again.

S. T. Stone is an ordinary man who lives in a typical small town with his best friend of thirty-two years. Although he has no formal training, he loves the Lord and steadfastly maintains that “Christianity is not a religion; it is a relationship. You can’t serve Jesus Christ unless you love Him, and you can’t love Him unless you know Him. Our job is to help folks get to know Jesus. God will do the rest.”

Often the first step out of spiritual darkness for a new believer can be compared to the groundhog’s reaction after he sees his shadow. In the book, Mr. Stone describes what happened to him: “It was like God was playing a game of chess with me and had just taken my first pawn—a seemingly insignificant move at the time but a profoundly important event in terms of the final outcome of the game.”