With Love from the Streets.

Encouraging the Church to Carefully Consider What We've Come to Believe 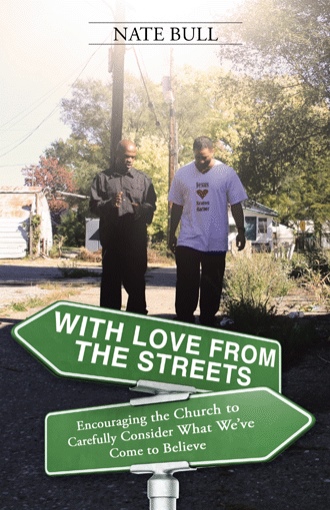 I am a street minister. More technically I am an urban missionary. I grew up in the Christian Reformed Church of America. This was a good thing and a bad thing. On the one hand I learned many godly principles and saw godly men and women acting in ways that exemplified the best of Christian behavior. I also committed many Bible stories and Scriptures to memory during this time and discovered teachings that formed a foundation that I would later use in leading my family and the ministries God began through me.

I also accumulated some garbage because of this early exposure to church. I don’t want to go into this “junk” in detail, because I want to be careful with anything that sounds dishonoring and critical (especially because the Church is the Bride of Christ and I wouldn’t take well to people talking bad about my wife). What I will say is that at a very early age (11 or 12), in my heart, I left the church. What was the main reason? I saw a disparity between the God in my church and the God in my Bible.

The God in the Bible was exciting, mysterious and even dangerous. The God in my Bible was full of love (like my church declared), but that God was also able to part seas, calm storms, raise the dead, multiply food and cast out demons. The God in my church was nothing like this. I assumed one version had to be wrong and, even though I was only in elementary school, I decided that the God in the Bible had to be true and so I left the Church in heart only. When I was old enough to decide on my own I physically left the Church. This decision got me into a lot of trouble, so if you’re reading this and identify in any way with what I was feeling and sensing, please don’t make the same mistake I did. Stay with the fellowship of believers or find some Christian fellowship somewhere because the world loves to chew up and spit out believers who are running from the Body of Christ. The decision to leave the Church led to having a child while I was a teenager, strained family relationships, and problems with addiction.

When I eventually came crawling back to the Lord I still had all these questions about the God I saw in my heart and the God I saw in the Church. Could He still raise the dead? Could He still calm storms with just a word? Could He still use people to slay giants and restore nations? If I was going to give my whole life to any god then that god should be able to do god-type things. My convictions told me that the Jesus of the Christians was where the answers were, but I still felt restless.

And then the Lord began to move.

With Love from the Streets is a confessional about the process of repentance from a model of church that has been learned all over America. Challenging and sometimes disturbing, this love letter to believers comes from Nate Bull’s years as a domestic street missionary and asks many questions about what the church in the west has come to believe and why.

As the director and co-founder of Vanguard Street Ministries, Nate Bull has been leading inner-city street ministry efforts around the world since 1999. A graduate of Western Theological Seminary, Nate is also an ordained minister in the Reformed Church of America and has been preaching in churches since 2004. Nate has a passion for revival in the church of the west and for the church to remember its call to the lost, wherever they are to be found. He has a wife, two sons, two daughters and one granddaughter. Currently Nate lives in Kalamazoo, Michigan, with his family.