When Your Parents Approach Their Final Days 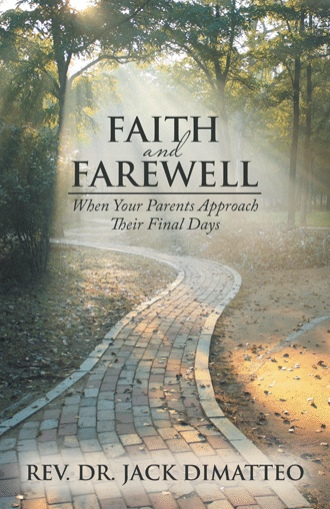 Most of us reach a point in our lives when we realize our parents will not live forever. And for most, this revelation occurs sometime in midlife. What about you? Did you wake up the other day and face the startling reality of your parents’ mortality? Were you driving down the road, running on a treadmill, or texting a friend when it suddenly occurred to you that someday, and maybe someday soon, your parents will no longer be around and you will be an “adult orphan”?

• Your parents are aging and are in the twilight of their lives.

• You are either middle aged or rapidly advancing toward that stage in life.

• You are part of a sandwich generation caught between the caregiving responsibilities of your children and your aging parents.

• You are growing increasingly concerned about your parents’ overall well-being.

• You are searching for some spiritual meaning at this time in your life.

Then this book is for you!

This book is dedicated to adult children who are witnessing their parents’ steady, certain advancement toward death, either through the effects of life-limiting illnesses or the natural aging process.

If you find yourself in this station of life, then no doubt you are trying your best to cope with the approaching death of one or both of your parents. You may be feeling helpless, depressed, overwhelmed, or generally ill equipped to address this delicate time in life while envisioning some form of graceful farewell to the people who have had a tremendous impact on your entire life: your parents!

The reality of my parents’ mortality hit home for me when my parents became octogenarians. Though my parents were steadily declining physically and cognitively over the years prior to this time, it was as if the mortality switch was instantly flipped to “terminal” once my parents entered the decade of their eighties. Suddenly, as if overnight, there were more doctor appointments, more aches and pains (theirs and mine), more medical procedures, and more contacts from me just to check in to ensure that all was well in their world. There were disagreements between me and my parents regarding how they were to live, where they were to live, with whom they were to live, etc. All the while, I observed each of my parents slipping into a downward spiral from which they would never, ever recover.

My parents’ tailspin was indicated by their growing physical weakness, their inability to make simple decisions, their occasional stubbornness, and their propensity to cling to outdated ideologies that were no longer pragmatic or even logical for their stage in life. I discovered my parents waffling between the desires to exert their authority as parents on the one hand and the occasional moments of childlike innocence and dependency on the other hand. They were scared, and I was scared, by a future that promised further deterioration and decline while necessitating critical end-of-life decisions that previously seemed far too distant to even imagine or consider.

During that tumultuous time, I found solace and consolation through prayer, meditation, Scripture readings, exercise, and an occasional good cry. As you will discover from my story, shared in this book, there were days when I seriously wondered how I would approach each new day without falling apart and just giving up. There were frustrating days spent consulting with physicians, planning appropriate care structures, negotiating with insurance companies, conversing with social workers, telephoning agencies, and leaving phone messages for my sister, all the while praying fervently for the spiritual strength to address my parents’ personal issues as they declined rapidly over a short period of time.

There were times when caring for my parents became a full-time job, on top of my real full-time job, and in addition to my other full-time job of raising my kids. I will acknowledge now that it was a crazy time in my life as the emotional roller coaster spun out of control on a daily basis. In retrospect, no wonder I felt constantly fatigued and in perpetual need of a vacation!

During the time when my parents demanded more of my attention, I had been serving a ministry as an interfaith hospice chaplain, which meant that I was “clinically” addressing death and dying on a daily basis. By this time, I was in the middle of my second decade of hospice ministry and had loads of clinical training that equipped me to address my own parents’ demise. However, when dealing with my own parents, there were several days when I either hid behind the emotion-protecting walls of my clinical acumen or lost rational, objective thought processes altogether while grappling with circumstances regarding end-of-life care that were way beyond my ability to control.

Back then, I discovered that clinical knowledge was a valuable asset in working with my aging parents. Yet when push came to shove (and there were times of shoving), I experienced the push-and-pull, tug-of-war battle between the heart and mind whenever life-changing or life-threatening circumstances demanded prioritizing. My emotions swung faster than a metronome on high speed. My moods changed with the weather, and if it wasn’t for the grace of God, I never would have survived.

But I did survive, and now I want to encourage your survival in dealing with the issues you are facing as your parents journey toward the end of their lives. If I could encapsulate my acquired wisdom into one primary piece of advice for you, it would be this: whatever the circumstances you are currently facing, keep telling yourself if the Lord gets you to it, the Lord will get you through it!

Saying farewell to your parents is a spiritual endeavor. In this book, along with my story, I will address the seven spiritual themes that commonly surface during this transitional time:

When you open yourself up to explore these themes, you will grow spiritually as you gently usher your parents toward their earthly finish line. I am not suggesting that the process will be carefree and effortless—quite the contrary! I am suggesting, however, that with an open heart and a willingness to allow God’s grace to flow through you, the entire journey will become much more meaningful for you and for your aging parents.

A Startling Thought: When did you first realize your parents were not going to live on this planet forever?

An Even More Startling Thought: When did you realize that your parents may die soon?

In Faith and Farewell, a veteran hospice chaplain explores the spiritual dimensions of saying good-bye to aging parents. Discover the Seven Spiritual Themes which commonly surface for adults whose parents are rapidly declining and advancing toward death:

Pastor Jack shares his own story while encouraging others to “let go”, to stop micromanaging every detail, and to entrust those final days to the sovereign will of the Creator.

Learn how to grow spiritually as you lead your parents through the concluding chapter of their lives.

Sensitive and scholarly, Faith and Farewell includes biblical instruction, meditation tools, and insights into how families can cope during the spiritual process of ushering their parents to their earthly finish line.

For over 25 years, Rev. Dr. Jack DiMatteo has served as a Lutheran parish pastor and interfaith hospice chaplain. He lives in New Jersey with his wife Kathy and four children.