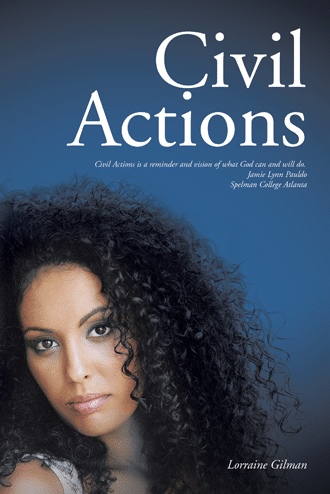 
Lauryn stared out the window of her law practice at the three teenage girls loitering on the street corner one story below her. One of the girls gestured wildly, dramatically recounting a story to the amusement of her friends. A tight green tube top barely covered her bulging stomach. Occasionally, she placed a hand on her back in an effort to counterbalance the pregnant belly.

Another girl, no more than sixteen, held a baby on her hip, gently swaying side to side. The baby seemed to enjoy the gentle rocking motion. He arched his back to reach for his mother’s face. The teen gently swatted the baby’s hand from her eyes. Then, she instinctively took the child’s chubby fist and kissed it.

The third girl tossed her waist length blonde hair back with a flick of her head. A fluorescent pink spandex dress clung to her body. A large koi fish tattoo adorned one of her long pale legs.  She rocked the baby in the stroller next to her. The baby squirmed while screaming at the top of its lungs. The girl ignored the wailing infant. She remained engrossed in the conversation, impatiently rocking the stroller to quiet the infant.

She poured some of her soda into a baby bottle. She shoved the bottle into the baby’s mouth and continued to laugh at the animated storyteller.

Lauryn gasped as she witnessed the innocent child eagerly drink the cola. She stood up and leaned across her desk, out the open window. She considered yelling something to the negligent teen below, then reconsidered.

Just then a large African American woman planted herself firmly in front of the trio. Recognizing her mother, Lauryn chuckled to herself. She strained to hear what Rachel was about to say.

“Child, what in the world were you thinking? Putting cola in that bottle. What are you going to do when that baby is awake at three in the morning, full of caffeine, screaming?”

The blonde tossed her head back. She lifted her chin and snapped her gum. “I ain’t got money for formula.”

“I find that hard to believe, judging from the acrylic nails you have on those hands.” Rachel did not miss a beat. “Come with me.” She turned to the two girls behind her. Their mouths were open, stunned at Rachel’s boldness. “Your friends here will watch your baby for you, won’t they? While we’re inside buying some formula, you can check his diaper, too.” Rachel tilted her head in the direction of the two teens. She raised an eyebrow.

“Yes, m’am,” they said in unison. Rachel took the blonde by the arm, leading her into the grocery store directly below Lauryn’s law practice.

“Come on. Maudie will rinse that bottle out for you in the bakery sink. We can fill it with some proper formula. I’m sure we can find some diapers and wipes, too. I have a feeling you’re in need of those also.”

Rachel disappeared into the grocery store. The two stunned teens immediately picked up their friend’s child, checking his diaper.

Lauryn sat down in her chair. She laughed to herself. Her mom was an incredible woman. Lauryn imagined the scene downstairs in her father’s grocery store. She pictured Rachel dragging this girl up and down the aisles, lecturing her on nutrition and the proper care of a baby.

Rachel was a regular fixture at her husband Lionel’s grocery store. When he inherited the store from his father, Rachel worked alongside Lionel, building the business into the prosperous enterprise it was today. She knew what products women were looking for. She avidly followed food trends. With her eye for purchasing and Lionel’s reputation for honesty, Cooper’s Provisions grew from a corner store to a large food emporium, one of the jewels of the Harlem neighborhood. When she was a child, Lauryn helped stock the shelves, alongside her brothers. On weekends, she rang up sales in the deli.

Two of her brothers joined the marines just as her father had in his youth. The other three brothers acquired business degrees in college. They became driving force in the family business. Thomas designed all of the software for the expanding business and handled the human resources department.

Marshall is in charge of expansion. He acquired properties in SoHo, the Meat Packing District, Chelsea and the Upper West Side. Currently, he was expanding into Brooklyn; purchasing property in Brooklyn Heights, Park Slope and Williamsburg.

Phillip handled the logistics of the operations. He managed to keep the rapidly expanding operation moving smoothly procuring the finest foods from regional vendors. His local purchasing was reflected in the fresh produce and organic products that Cooper’s became known for. His choices catered to the finely tuned New York palettes.

Lionel was all but retired now. He and Rachel moved from their modest apartment above the store where they raised six children to a grand three-story brownstone. They remained in the neighborhood to be close to family, friends and church.

Rachel remodeled the beautiful pre-war building. She added her personal touches in every room. She removed all of the original fixtures from the eighty five year old grocery store and had them refurbished for her kitchen. The old glass and wooden cases of the original store added unique charm to her gourmet kitchen. The walls were dotted with vintage advertising salvaged from the basement storage. A large wooden sign saying Cooper’s Provisions est. 1918 hung prominently over the six-burner La Cornue Range of her dreams.

Lauryn’s law practice occupied the old family apartment over the original store. She used the living room as a reception area for her clients. The dining room became her private office. It was large and airy. She kept the kitchen stocked with coffee and a few basics to make sandwiches or midday snacks. Only her bedroom remained the same, as it was when she lived at home. She sometimes went in there to think or occasionally nap after a grueling court session. She maintained some emergency suits including a few other pieces of clothing in the closet. The other bedrooms held office supplies, copy equipment and legal files.

She flopped back down in her chair, crossed her long brown legs and stared at the pregnancy test stick in front of her. It had just shown a negative result, again. She dropped the stick in the wastebasket under her desk. How come every teenager in New York can get pregnant and I can’t? She and Ron decided to have a family immediately during their honeymoon. After two years, she was ready to consult a fertility specialist in midtown. She dropped her head in her hands. Her shoulders dropped as she sighed deeply. Had she waited too long? She was only twenty-eight. Surely women older than that were having children every day.

In Civil Actions, the sequel to Princeton Pentimento, Lorraine Gilman further explores the character of Lauryn. Married to a successful Wall Street banker and practicing law in Manhattan, it would appear that Lauryn has it all. But her life is becoming complicated. Lauryn is struggling to start a family and maintain balance. This means learning how to say no to her mother and pastor who love to involve Lauryn in their latest causes, which consist of helping an exotic dancer and a juvenile delinquent. How will she realize her dream of having a baby while juggling this cast of characters and with a husband who seems to spend more time in airports than at home?

Lorraine Gilman is the author of Princeton Pentimento and A Flawless Foundation. She resides in Atlanta, Georgia, with her husband of more than thirty years, Murray, and their growing assortment of pets. After years of raising children and occasionally painting, she decided to put down her brush and write. Civil Actions is her third novel and the sequel to Princeton Pentimento.