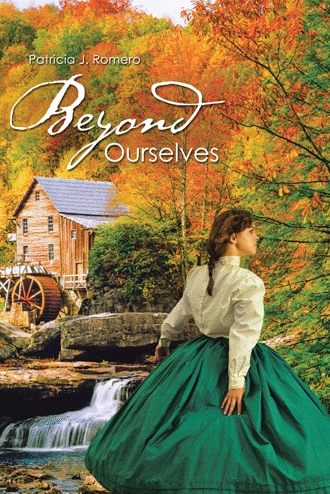 "We can whip twenty Yankees with one hand tied behind our backs," boasted Robby and Aaron as they whirled Julia around in a lively impromptu dance, making her laugh. It was May 21st, 1861.

That very next morning, after a night of playing backgammon and bolting out rousing tunes around the piano, Aaron tickled her by cleverly outsmarting her brother, sending him off on some wild goose chase so he could snatch a few precious moments alone with her to stroll hand in hand through the dew and wildflower studded meadow.

While squeezing her hand, he had led her off into the more reclusive woods. "You'll wait for me," with an obvious catch in his voice, he lowly suggest, peering sweetly down at her with those familiar and forever hopeful green eyes of his.

"Of course," she replied, looking her admiration fully up at him--just a couple inches under six feet, sun-kissed golden brown hair lifting slightly in the moist spring wind, high-boned cheeks creasing into an outright grin.

That vow of love, although two months past, did it not make her feel tingly all over again? Even as through this same sheltering grove she again walked, alone this time--clusters of boxwood no longer orchid and white, once pink apple blossoms now lying faded and dead all around!

How enticingly redolent, though, these familiar scents and comforting, along with the chirp of crickets and katydids filling the oppressively warm atmosphere of this mid-summer's twilight!

Upon reaching the stile capping her father's barely visible split-rail fence and feeling of its wooden roughness, she procured it upon herself to prop up on top. So on the utmost step she freely sat to take lone vigil of her world as was often her chosen pleasure on many a warm summer's night.

Ah, would she not mind staying here forever, palms braced against her stile top, her head thrown back while gazing up at the vast unknown where she could often pick out the North Star along with the Big and Little Dipper?

And did not all of the stars seem exceptionally bright this night? So bright she could actually fancy seeing their shininess reflected in the gently moving nearby creek waters!

Even an old Indian legend proclaimed the Shenandoah Valley so lovely that from the very heavens each star cast its brightest jewels into the many streams of it. And did not that very name, Shenandoah, mean clear-eyed daughter of the stars, just as Aaron had once teasingly called her?

Dreamily remaining to imagine all sort of fanciful things, she soon found her vigil rewarded by the sight of a brilliant comet shooting mightily across the night sky--portending good things to come, did it not?

After all, hadn't their boys already whooped the Yankees at Falling Waters? And previous to that had marched to Bunker Hill to block the road leading to Harper's Ferry before taking part in helping to destroy the Baltimore and Ohio railroad near Martinsburg?

And now, did she not feel a wave of apprehension in response to recent reports of Federal troop movements in front of Washington, resulting in Johnson's army being called out?

But exactly to where their brigade was now headed or why, no one seemed certain.

Her fears that following morning, Julia found to be justified when upon rising and after a quick toilet, she rushed downstairs to discover her father jumping up from his place at the long dining table, her mother standing there filling a brown wicker basket full of what appeared to be biscuits.

"Word is our boys will be coming through this very morning--on their way to Piedmont Station," Luther Claiborne solemnly informed, setting down the large serving spoon so hard it clinked loudly against the half-empty platter.

"So what does this mean?" she questioned, even while her mother was placing a red and white checked cloth over her now heaping full basket and she looked to her father for some explanation.

Not expecting an immediate answer and not seeing any emotion transforming his well-chiseled features, Julia took it upon herself to rush over to the large, leaded-glass window in hopes of being able to determine what might be transpiring.

Here in warm sunlight, with one hand grasping a stiff portion of starched curtain, she peered out to behold that which she had not anticipated.

"Mahala....why is she out there gathering roses?"

Could she not plainly see the woman's dark skin glistening in the dew of the morn, along with the velvety red of the snipped roses standing out in bold contrast to her bibbed white apron?

"I asked her to gather some," Mattie Claiborne, having moved to stand directly behind her daughter, meekly informed. "Perhaps even some foxglove."

"Purple foxglove? I'll go help. But why are we doing this?" Julia whirled back around, a wave of dread making her heart pound. "Could it be...?"

"No, no one has died, if that is what you are thinking," her mother placed a reassuring hand on one arm.

"Not yet," her father, never one to mince words, abruptly countered.

"Oh, your father predicts a major battle ensuing," Mattie Claiborne with a wave of her hand, tartly remarked even while scowling her displeasure at her resolute husband.

The War Between the States was a particularly difficult time for those who lived in the South, especially those in the Shenandoah Valley of Virginia, who quickly became witnesses to many battles and other ravages of that awful conflict. Among those who were beginning to wonder how they could endure all of this was Julia Claiborne, who held great concern for her family and almost daily had to fight off the fear of losing that which had become a big part of herself—their beloved, ancestral plantation, Beulah Land.

Patricia J. Romero lives in a high mountain valley of Colorado with her husband of more than forty years. She started out writing poetry, but her interest in history led her to writing inspirational, historical novels. Her desire is that her efforts will bring honor to the God she loves.