Pansy and the Promise 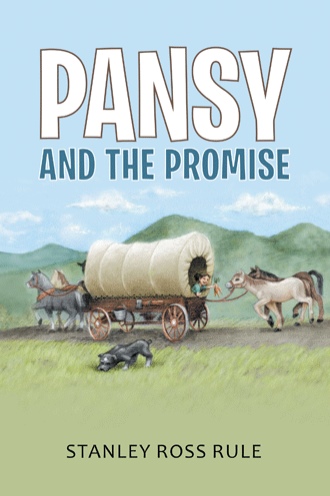 Chapter 4 Papa began the story. "When your Great-Great Grandmother Nancy Ross was just a young girl about your age, she lived in the State of Kentucky with her parents. They lived in a little log cabin, much like the one we live in, but instead of being at the base of a great mountain, it was nestled in the deep woods of Kentucky. This was a long time ago, just before the United States became a Nation.

Nancy had long, dark black hair and dark brown eyes. I guess you could say she looked a lot like you, Pansy." Papa went on, "Anyway, it was a time in our Nation when there was war going on between the settlers and some of the Indian tribes. You see, Pansy, some of the settlers were building their houses and growing their crops on land that belonged to tribes of Indians for hundreds of years. In some places, the settlers and the Indians made agreements or treaties that permitted settlers to farm and build on the land, but in Kentucky, where Great-Great Grandmother Nancy Ross was living, there was no such treaty. In fact, the Iroquois Indian tribe had threatened to chase off the settlers and burn down their homes if they didn't leave."

Papa continued with an eager voice. "One day, while Nancy was in the yard feeding chickens and her mama was in the house washing clothes, they heard a loud shout and the sound of men yelling. Nancy looked up and she saw her papa riding his horse, with the speed of lightning, across the field of corn he had planted. Right behind him, only a hundred yards away, was a band of Iroquois braves chasing him on their horses waving knives, tomahawks, and clubs."

"Nancy's papa rode into the yard, screaming, 'Get on your horses! Get on your horses and ride!'" Papa seemed almost breathless as he continued telling the story. "There was no time to saddle up. Nancy's mama jumped on the nearest horse in the corral, while Nancy climbed behind her and hung on for dear life. 'Go, Go, Go, Go, Go!!!' Yelled Nancy's father, and they left with the wind, just as the braves caught up with them. Some of the braves got off their horses and set fire to the log cabin."

"The braves were coming closer and closer. Nancy and her mama were riding faster and faster, but the braves were catching up. Nancy's papa saw what was happening and, courageously, turned his horse around to fight the braves. It was three against one and, while Papa was wrestling with one brave on his horse, a second brave struck him on the back of the head with a club, knocking him to the ground. The third brave kept riding until he caught up with Nancy and Mama. He reached out and plucked Nancy from the back of the horse. It was too easy and, in a flash, all three braves disappeared into the woods with the other warriors and Nancy."

Papa stopped to catch his breath, then continued the story. "The house was burning and Nancy was gone. Nancy's mama came back to find her husband sitting on the ground, with blood oozing down the back of his neck. There was no point in chasing the braves. They knew the woods too well and could have gone off in any direction. Nancy's mama and papa just sat there and cried.

In a few moments, they had lost everything in the world that meant something to them. 'Nancy, Nancy!' her mama cried. Right then and there, Nancy's papa said to her mama, 'We must pray for her. We have to trust God to keep her safe and return her to us.' As Nancy's papa held onto her mama, they cried out to God to be with their little girl wherever she was taken."

Papa sadly continued the story, "Meanwhile, the braves returned to their tribe with the news they had chased out the settlers and stolen their child. Many of the tribe members celebrated at this success with hoops and yelling, cheering, and dancing. But, there was one member of the tribe who was not celebrating. Her name was Lolotea."

"Lolotea was an old Indian mother who had lived many years and was considered wise among the other women of the tribe. She had raised many children and the thought of some family losing their daughter, even if they were white settlers, was horrible to her. She kept silent but, in her heart, she planned to help this little girl the braves had stolen," said Papa.

"You see, sometimes God keeps us from trouble, and sometimes God keeps us safe in our trouble," Papa said slowly. "When Great-Great Grandmother Nancy was stolen by the Indians and her mama and papa knelt down to pray and cry out to God, He heard their prayers and touched the heart of Lolotea, who had a heart of love for children. This is what it means when the Bible says in Heb. 13:5 (KJV), 'I will never leave you nor forsake you."

A spiritual awakening happens to ten-year-old Pansy Hunt when her parents launch out on a covered wagon adventure from Lincoln, New Mexico, to Galveston Island, Texas, in the year 1900. Along the trail, Papa shares campfire stories with Pansy about her unique family history. Stories like Pansy’s great-great grandmother, who is captured and raised by a warring Indian tribe, only to be rescued seven years later by a brave Indian scout. Stories that teach her about trusting God in the most impossible circumstances imaginable. These tales combine with real adventures along the trail to develop Pansy’s spiritual understanding that God promises He will “never leave us nor forsake us.” Letters and photos at the end of the book reveal that these adventures are drawn from the true life and family history of Pansy Virginia Hunt Rule. Pansy and the Promise is written for young minds to easily grasp the concept of God’s grace, mercy, and strength in a story of adventure, mystery, and intrigue.

Stanley Ross Rule serves as a chaplain at Memorial Hermann Children’s Hospital, Texas Medical Center, Houston. He has been an ordained minister for thirty years and also serves on staff as minister of pastoral care at Friendship Church of Richmond, Texas. He has been married to Judy Rule for forty-two years. They have three children and ten grandchildren.