Adam and Eve the Book 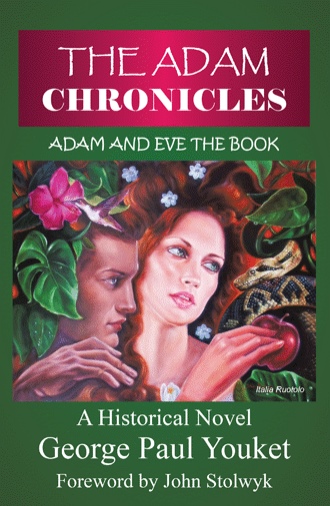 Then the LORD God formed man of dust from the ground, and breathed into his nostrils the breath of life; and man became a living being.

It was the first morning, and the forest creatures awakened to the appearance of something strangely different and beautiful. There, lying in the cool of the morning, was a creature so unlike them. What kind of creature was this? Or was it a creature at all? No species like this had yet appeared in the garden.

As all the angels in Ooranos (the heavenly realm) were watching, wide-eyed with amazement and great anticipation, the Creator took a deep breath and breathed into the nostrils of the still body. Suddenly, the creature began to move, unfolding his arms and legs from the fetal position in which he had been lying. His eyes opened and stared upward, slowly scanning back and forth trying to take in and comprehend all that was flooding his mind and soul. Sounds filled his ears, and rays of sunlight created feelings of warmth upon his body.

As he lay there gazing upward, another Being stood over him, a Being of indescribable beauty. Golden hair graced His head and shoulders, hair that seemed to be made of liquid crystal, like light itself. His eyes were like blue sapphires and were full of kindness. A smile creased his face with the countenance of grace, which gave the creature an immediate sense of peace. A wonderful, indescribable force of well-being radiated from the Beings presence.

Suddenly the Being reached out and said, “Come, Adam (meaning man), rise up.” Adam reached out instinctively and found the touch of the Being’s hand was gentle and reassuring.

Adam thought to himself, Where am I? And who is this?

As Adam rose to his feet, he said to the Being, “Who are you, my Lord, and how is it that I am here and able to understand your words?”

The Being said, “I am your Maker from the realm of Ooranos, another dimension, and you are the first Adam. I made your body from the dust of the ground and from my Spirit I breathed into you the gift of life. You are man, made in our image, the very image of God.”

Adam thought to himself, What a wonderful feeling to have life! Is there any gift like this gift? He had no understanding of the fullness of this gift, but he did realize it was something very wonderful.

The Creator, knowing his thoughts said, “Yes, life is the most wonderful gift one could ever receive. But not only that, your life has been fashioned after the image and likeness of your Creator. You are the physical expression of our love, grace, and glory in this creation.”

“Are all the other creatures I see around us also made in God’s image?”

“No, all these creatures were made for your pleasure. You are not to refer to yourself as a creature because you are a man, made in the image and likeness of God. As a man, you are much different from the creatures. Creatures were not made in the image and likeness of their Creator, but each one was made for your pleasure and each will reproduce after their own kind.”

“Lord, I don’t fully understand. If I am called man and made after your image and likeness, then what are you?”

“I am your Creator, I am called, the Word of God who is the Divine Expression of my Father in heaven who is love, a life-giving Spirit who is from everlasting to everlasting. My Father and I are one. Because we are Love, we desired to make a man-child in our image so that we could express our love to him and that he could also experience that same love within himself. Our desire is to give you all things pertaining to life and God likeness. You will share our joy and peace in this garden, but the greatest thing is that we will share in the communion of fellowship as one family together.”

“You gave me understanding of many words and things, Lord, but I do not understand these things, or the word love. Would you help me to understand?”

“I AM. I am Love because I come from the Father. I AM is your Abba Father, who is Love. I AM is your Comforter, the Spirit of Life, and He too is Love. I AM the Eternal Son of my Father, and we exist in union with the Spirit of God, and we are one God. Love exists only because we exist in family relationship as three, yet we are one. To understand this and its meaning is to understand our glory, the glory that you share and why you were created. “Now concerning love, it can only be understood by time, time spent with me. You are the greatest idea that was ever devised in the mind of your Abba, your Papa. You can call me Love because I AM God, and God is Love.”

Adam said, “Can I see my Father who is in Ooranos?”

“In seeing me, Adam, you have seen your Father.”

Then Love gently pulled Adam into His arms and embraced him. He said, “Adam, I love you, and my love will never fail you, trust me always.” A rush of emotions that he could not explain filled his soul. It was like a waterfall of pure joy flowing over him. There was a warm radiance of light coming from Love’s innermost being that enveloped Adam like a coat. The light did not hurt his eyes, yet it blinded him to everything else that was around him. It was as if he had meshed with Love and became one spirit with Him. It gave him the assurance that this was where he belonged and what he would forever long for.

It is the first morning in the Garden of Eden as the creatures of the forest awaken to see something beautiful and different lying among them. As all the angels in the heavenly realm watch with great anticipation, the Creator breathes into the nostrils of the still body. Suddenly, the creature begins to move. Adam, who has been given life, is the first man and is created in the very image and likeness of God.

After Adam comes to understand the gift of life and love with help from the Father, God takes him by the hand and shows him the garden paradise created just for him. As Adam and God part for the night, Adam lies down to sleep, marveling at the power of his Creator and the beauty surrounding him. On the seventh day, God introduces Adam to the fruits of the garden and a woman created from his very own rib. But just as Adam and Eve realize their love for each other, a black force emerges to test everything they know and understand about God’s love, life and nature.

In this historical novel, actual and imagined events weave together to bring to light the meanings and truths behind the story of the first Adam.

“The Adam Chronicles transports readers into a realm where they can see, feel, touch, and smell the beginning of God’s mighty journey with humankind.”

George Youket graduated from Practical Bible Training School in 1976 and subsequently founded and pastored Binghamton Gospel Tabernacle. He is currently president of Mirror Identity Ministries. George lives in Binghamton, New York, where he enjoys writing both songs and books that help spread his message.