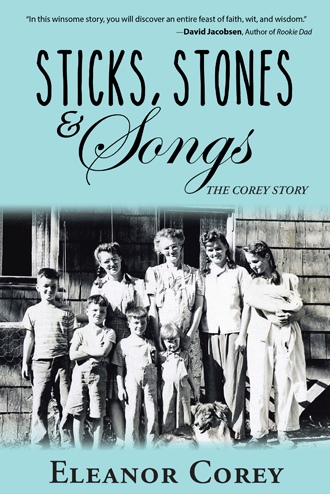 “What should I bid?” My father, Arthur Corey, turned to ask the man standing next to him.

“The amount of the overdue taxes.”

It was 1937, near the end of the Great Depression, when twenty-eight was even less than the thirty-five dollars college-bound Arthur had paid for an overcoat in 1924. But at the Clallam County Court House, a few blocks up from the waterfront in Port Angeles, Washington, Arthur was bidding on something far more significant: an abandoned, defunct grange hall, and the quarter acre out in the country where it stood.

Arthur paid the auctioneer, buttoned his threadbare tweed overcoat, pinched the front creases of his brown fedora, and settled it on his head. He bounded down the courthouse steps and scurried up the sidewalk, document in hand. At the cottage on East Second Street, three girls met him at the door, calling back toward their mother, “He’s here! Daddy’s home!”

Their mother Margaret—black-haired, slim, and nearly as tall as her husband—held chubby, six-month-old David. Daddy took off his hat, brushed the other hand through his receding sandy brown hair, and told his wife about the auction. She looked through her glasses, straight into his eyes, and nodded silently. She had seen the grubby yard and tumble-down shack on their trips out in the country. Her bright-eyed daughters didn’t notice the hesitation. They only saw the sparkle in Daddy’s eyes and heard the lilt in his voice. Marilyn, the five-year-old, jabbered to her sisters, “We’ll be living in the country! It’ll be an adventure and I can’t wait ‘til we move!”

She put her hand over her mouth, fearful that she had spoken too loudly and Daddy would be cross. Virginia, two years older and that much wiser, cautioned under her breath, “The place is a mess. Mother said so, and I’ll have to go to a new school.”

Elizabeth, at three, said nothing. She blinked back and forth at the others, nervous about the change and scared that the nights would be dark. But it was a done deal. With the cash in his pocket Daddy had purchased a building that would become the family residence. Chronicle Two 1946-1958

“Quick! Down in the ditch!”

I did as I was told—dropped the shingle I was toting, slid down the bank, curled up, and buried my head deep in the grass as fast as I could. I was three years old, so hiding was easy for me. Not so easy for nine-year-old David, who, in addition to covering himself, had to disguise the heavy plank he was carrying. I peeked. A car was coming around the corner on Highway 9A. It was the color of overripe raspberries—the kind you don’t see until you step on them. This is my first memory—an eye-scorching memory buried deep in the tunnels of my brain—a memory that, for the rest of my childhood, surfaced with a spasm of fear at the sight of any dark-reddish car, like the one that had sent us into the ditch.

One month earlier, before my memory kicked in, Daddy had decided that we would move our house to the farm, and we would have to do it without a vehicle, without a mule, and without new materials. Our father knew exactly where it would fit on the land, and how the boards and shingles we took from the Grange House could be put to optimum use in a structure that could—one day—be turned into a barn. The drawings were in his head, as clear as an architect’s blueprint. Who could argue? He had given further rationale, “When the move is complete, we will live close to our garden, our orchard, and our cow; and we will have our own creek full of running water.”

Mother had agreed—albeit with concessions. She needed to be certain that this would be a temporary dwelling, not a permanent home. Daddy gave his assurance. Then he took his first step in the house-moving transition. He cleared out a place in the cellar under the Grange House and moved in a bed for himself. He led us children to believe his motivation was the hot weather, but in all likelihood it was one of his concessions to Mother—that she would not be having a baby as per her most recent schedule of deliveries.

Back and forth down the highway bit by bit, item by item, everyone big enough to carry got in on that—Marilyn, Elizabeth, David, and even John. All except for Virginia, who pulled and straightened nails, since she had injured her foot and couldn’t walk.

It was in the middle of these goings-on that I picked up three shingles to match my three years, and asked, “Mother, can I carry too? Please? I’m big.” “No, it’s too dangerous.”

“But the rains will come and wet my bed. Please let me. Please?” I begged. Mother relented, but took away two shingles, saying, “One is enough to start with.”

So I stood, shingle in hand, peering up at the open sky through the gaping roof, and waiting for David to quit dawdling. I wanted to go as badly as he didn’t. I wanted to help move our house too.

Within a few trips, the ditch-diving by David and us younger ones had flattened the tall grass along the road, so hiding places became harder to come by. Our sisters, however, were too big to hide, and just had to ignore the indignity of the job that had to be done.

In 1937, with the cash in his pocket, Arthur Corey purchases a grange hall, a derelict, drafty, long-deserted building destined to become the family residence into which babies, including the author, are born, one after another, after another. These children learn lessons via the school of hard knocks, transform throw-aways into tools, and become all too familiar with an outhouse where catalogs are used instead of toilet paper.

Arthur paid the auctioneer, buttoned his threadbare tweed overcoat, pinched the front creases of his brown fedora, and settled it on his head. He bounded down the courthouse steps and scurried up the sidewalk, document in hand—it was a done deal!

“Sticks, Stones & Songs is a powerful recounting of faith in real life that crescendos through the years. I loved getting to know the Corey family through this story and was encouraged in my walk with God!”

“Eleanor Corey drew me into a multi-generational memoir of her rural American family. She has embraced candor in telling the story of her clan within the context of community and history in a way that is vulnerable and transparent. Sticks, Stones & Songs will inspire you to recover your own ancestral secrets.”

“Sticks, Stones & Songs offers a rare glimpse of a bygone era and the people who made the woods of the wild Pacific Northwest their home. This is no sugar-coated account but life as it was with all its raw edges and loose ends.”

Eleanor Corey (Guderian), PhD, is a mother of three and grandmother of seven. After careers in music, leadership, and consulting that spanned twenty-four years in Ecuador and fifteen years in the United States, she and her husband, Ron Guderian, reside in Stanwood, Washington. Sticks, Stones & Songs is her story of growing up as the seventh kid.