The Art of Positive Leadership

Becoming a Person Worth Following 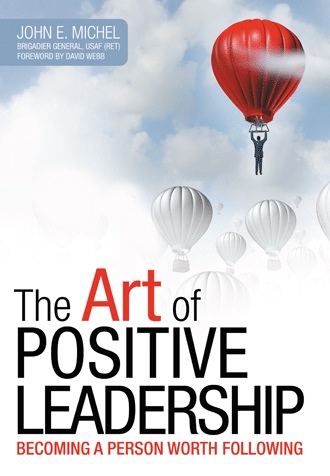 Preface Writing a Better Story “After nourishment, shelter and companionship, stories are the thing we need most in the world.” Philip Pullman I never intended to write this book. Let me explain. Nothing fully prepares you to serve in a combat zone. Although it is certainly true that, at the time, I was notified I’d been selected to Command the NATO Air Training Command—Afghanistan and 438th Air Expeditionary Wing in Kabul—I had already spent almost a quarter century in uniformed service seemingly preparing for this dynamic assignment. I say dynamic because our mission is to develop an independent, self-sustaining Afghan Air Force … in an active war zone! To be clear, it is difficult enough to build an Air Force in peacetime, but being tasked to train and develop sophisticated capabilities and integrate a myriad of technologies while concurrently fighting and winning a war is unprecedented. All, mind you, with limited time, diminishing financial resources, fewer people and scores of logistics and supply challenges. Add in a culture that is hungry for positive change but lacks so many of the elements many of us in western society take for granted and it’s easy to begin to believe we have been asked to pull off mission impossible. But nothing could be further from the reality of what is actually happening. You see, despite widespread illiteracy, a resilient and determined enemy, a largely tribal-centered culture, seemingly ever competing political factions and scores of other factors reflective of a nation that has known nothing but death and devastation for over three decades, progress abounds. Why? One reason—amazing, dedicated, courageous and committed people. Never in my adult life have I been surrounded by so many inspiring men and women sold out to doing their part towards writing a better story in a nation hungry for hope and change. At no other time in my career can I remember having the great privilege of working alongside so many accomplished professionals who, despite the daunting nature of their circumstances, choose to selflessly give their best to serve their fellow man. Be it American, Croatian, Greek, French, or any of the fifteen nations under my command, each and every one of those in our organization inspires me daily by their example. And, as their designated leader, I wanted to do something to return the favor. Having spent decades studying, teaching and applying the tenets of positive-oriented individual and organizational change across the globe, I understand people need to know what they are doing matters. In other words, each of us strives to make a tangible difference in our surroundings. Each of us yearns to be able to do our part to help write a better story. As human beings, we are moved by stories. Stories stir the soul, engage our hearts, and ignite our imaginations in a way no other medium can. Donald Miller, in his wonderful book, A Million Miles in a Thousand Years, shares how humans are alive for the purpose of writing a meaningful story (what he terms, a journey), a story played out in essentially three parts. The first part of our story entails our being born and spending the early years discovering ourselves and the world around us. We then transition into a steady plod through what Miller characterizes as ‘a long middle’ in which we seek to establish a sense of stability out of natural instability, before ultimately finding ourselves transitioning to an ending that seems designed for reflection. In the final part of our journey our bodies are slower, the minutes seem to go by faster, and we are prone to work less and celebrate more. All of which leaves us wondering if we have indeed made the most out of the precious, fleeting gift we call life. What is important to recognize about what Miller is telling us is that our time here on Earth is essentially an epic tale of risk and reward that unfolds before our eyes in real time—the more compelling the narrative, the richer our experience. The key to making the most of our days, then, is not allowing ourselves to get to a point in our journey where we are content settling for “good enough” when we are capable of so much more. Writing a memorable story, one which speaks of leading a life of significance, purpose and meaning, takes work. Great stories never unfold haphazardly. They don’t develop by accident. Rather, they are built one day, one experience, one opportunity, and, above all, one relationship at a time. Which leads me back to the book you are holding in your hand… As someone who has been blessed to have now led three massive, multi-billion dollar change and transformation efforts and who has been afforded opportunities to lead tens of thousands of people across six continents in both peacetime and wartime, I believe my primary responsibility to those I serve is to equip, encourage, empower and maybe even inspire them to use the raw material of their lives to make the most of their journey. How? By challenging those around me to continually stretch their thinking and enhance their personal and professional belief in what they are capable of being and doing. The medium I chose to transform this desire into action in Afghanistan is, not surprisingly, story. Specifically, from my first week on the job in the summer of 2013 I began delivering to all those in my care what I fondly term The Sunday Soundbite. These short, 800-1200 word life and leadership essays were designed to stimulate thought, encourage dialogue and, ideally, influence positive action. Each of these brief stories was designed to communicate a simple axiom, or practical truth, for the purpose of helping the readers grow into the best possible version of themselves. My hope is that they can do the same for you. But first, let me tell you the rest of the story.

Nothing fully prepares one for service in a combat zone. When I was selected to command the NATO Air Training Command Afghanistan and the 438th Air Expeditionary Wing in Kabul, I had almost a quarter century of uniformed service to prepare me for this dynamic assignment. “Dynamic” because the mission would be to develop an independent, self-sustaining Afghan Air Force … in an active war zone. The book you hold in your hand is a collection of the most important lessons we learned. Lessons which anyone, be it a parent, pastor, politician, soldier, teacher, or office teammate, can use to begin transforming ordinary interactions into powerful, positive experiences. War zone not required.

“I was honored to have served with General Michel in Afghanistan and observed first hand true leadership in practice under the most difficult conditions - In the Art of Positive Leadership, General Michel has captured the essence of the leadership style and skill that made him so successful in a theater of war - he has used a unique blending of axioms and stories, born from the very best leaders,  in an amazingly powerful message about the techniques and impact of leaders that unselfishly focus on what can be, what should be, and the people that actually make it happen ~ John Johns, Deputy Assistant Secretary of Defense (Maintenance)

John is a widely recognized expert in culture, strategy, and individual and organizational change. An accomplished, unconventional leader and proven status quo buster who has successfully led several multibillion-dollar transformation efforts, he is committed to leaving the world better than he found it.