A CHRISTIAN STUDENT’S GUIDE TO TRUTH IN SCIENCE 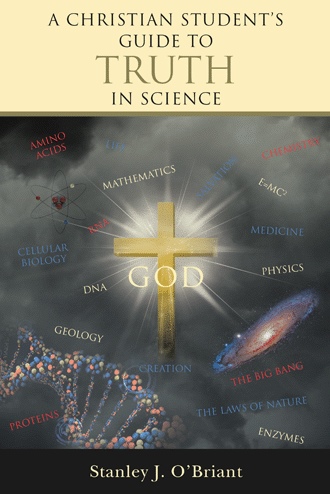 Today, evolution is so entrenched in the American culture so much so that advocates of evolution have become emboldened in denouncing the existence of God and actually advocate walking anyone who doesn't believe in God. For several decades evolution has been taught in our high school and colleges, and now Junior high schools, with a manual provided by the national Academy of sciences on how to teach evolution.

Television broadcasting companies along with all media no longer worry about offending any religious beliefs and proclaim that evolution is a fact. Even public broadcast company supported by taxpayer dollars, openly support evolution and the Big Bang such as Nova. All science oriented magazines publicize any announcement of a you find, new theory, even before it has been evaluated by competent scientist and often are forced to retract the original story, but of course these appear in the back of the magazine without any fanfare.

The popularized nation of evolution gained ground when Pres. Eisenhower asked Congress to fund $1 billion dollars to teach evolution in our public schools, so that we could catch up with Russia. The Russian space administration had long sputnik a small silver ball that circled the Earth every 90 min. broadcasting a signal that could be received on radio and television frequencies. Textbooks went from about 3000 words on evolution to about one third of the entire textbooks being devoted to evolution today.

When evolution is studied critically it becomes very apparent that there is little data supporting any part of evolution. From the lack of fossil record which disappointed Darwin during his lifetime, and the failure of the geologic column to explain the development of the Earth's crust, to the inability to explain how evolution by way of natural selection in a random process could explain the beginning of life and the development of a living cell that operates like a city receiving instructions from the nucleus that houses the DNA molecule with its 3 billion instructional codes, that serves as a blueprint for building the cell and every organ in the body including blood cells, the receptors in the eye, the brain which has more electronic connections than the entire electrical system of the United States, all of which are incrementally and irreducibly complex. Even a Boeing 747 with its 6 million parts none of which can fly by themselves, cannot compare to the simple cell which Darwin thought was just a blob of protoplasm. It's time to put evolution to sleep and teach true science that is based on fact and not innuendo.

This book exposes the attempt to teach atheistic evolution to students, often ridiculing their faith in God. The classrooms in our schools have become the battlegrounds for the minds of our children. Since the introduction of evolution by Charles Darwin there has been a growing list of atheist professors who vigorously fight any religion. The classrooms of America should not be the battlegrounds of any religion, but evolution is a religion. It has no place in the classroom since it does not offer any information that improves the teaching of any science class, except evolution itself. There is no proof of evolution, only assertions, innuendos, credulity (belief without proof), and suppositions. Fully one-third of all geology textbooks deal with evolution, which is founded only opinion and undocumented assertions. Therefore, it should be removed from all textbooks. Dr. David Menton, who taught medicine at the Washington School of Medicine in St. Louis, Missouri, for twenty-five years, stated that he never once needed to reference evolution in any medical class. A coalition of organizations such as the National Academy of Sciences, whose members are 93% atheist or agnostic, and the National Center for Science and Education control most of the government grants intended for schools’ use, fully support the atheism of evolution, and they attack any criticism of evolution.

Stanley J. O’Briant after graduating from South Oak Cliff High School in Dallas, Texas, joined the Dallas Fire Department and spent 27 years of service attaining the rank of Deputy Chief and later 7 years as the Director of Public Safety for the City of Desoto, Texas. Mr. O’Briant surrendered for the ministry in 1964, and received a B. A. degree from The University of Texas at Arlington. He attended Southwestern Baptist Theological Seminary in Ft. Worth, Texas from 1969 until 1971. Stanley served as a bi-vocational pastor in small churches and he and his wife Gayla served in the Youth and Young Married Departments of First Baptist Church of Duncanville, Texas, and the First Baptist Church of Oak Cliff, Dallas, Texas, when not serving as a pastor elsewhere. Mr. O’Briant also was a substitute teacher at Duncanville High School after retiring from the Public Service in 1991. After many years of service in Youth programs Mr. O’Briant realized that the educational systems had become the focal point for teaching evolution and the philosophy of naturalism and openly critical of Christianity, especially in the colleges where some professors were adamant in spreading the Darwinian gospel. This book is a response to that teaching of a failed theory and the serious consequence of its doctrine.