The Round Cat Trilogy 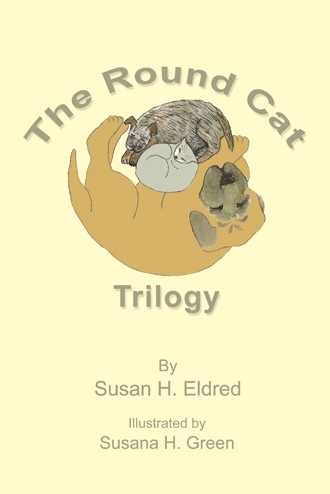 "Mom," The Round Cat asked, "why do I look so funny? If I didn't look like this, they wouldn't be able to tease me."

"There is nothing wrong with the way you look. Besides, it isn't what you look like on the outside that matters anyway."

"The other kittens may be beautiful to look at but your beauty comes from deep inside you. You have inner beauty. You're also smart, witty, and clever. You're very observant, a quick learner, and very sensitive. You know your way around the world. You make friends with everyone. All that takes someone very special, with very special talents.

"Besides, it isn't important what other people think about you. What you think about yourself is what is important. What is in your heart counts more than how you look. Your outside looks are there only so others can quickly tell you from someone else. You shouldn't judge anyone by their appearance any more than they should judge you by your appearance. Your body features have been given to you to help you in life. Whatever you're going to do, you will need to have those big, furry feet. Maybe you will go to the North Pole. Big furry feet would not only keep your toes warm but would keep you from falling into the deep snow drifts.

"Remember to value who you are; your talents are gifts that were given to you for a reason, even if you don't know that reason now. Someday, you will understand." With that, she finished grooming the kitten and sent her off to bed.

The Round Cat thought very hard about her mother's words. She really was smarter than the others. She wasn't at all sure she understood how big furry feet and big ears were going to help her in life. But her mom had said she was special. She had said she had been given talents as gifts. What were her talents? When she finally fell asleep, she dreamed about being special and having special talents.

A Glimpse of the Future

All night long, The Round Cat imagined she was special. It was like a game of "Let's Pretend." First, she went on Jeopardy for Cats and beat everyone else. Then, she won the Feline International Jeopardy and the right to appear in the first worldwide, interspecies competition. She won, of course. Then, she became a world famous explorer. She climbed big, snowy mountains and rescued the rest of her expedition. She was the only one with big, warm, furry feet and fur behind her ears. She could go out in the whiteout to bring back help. The President gave her a special medal for heroism. Then, he asked what she would like for her reward. She told him she had always wanted to fly in an F-14, but she thought she should try parachute jumping first. Of course, she was extremely successful at everything she tried. The more she dreamed, the smarter she got. The more she did in her dreams, the more confident she felt. By morning, she had become a doctor, a ballerina, a college professor and a jockey.

When the pink rays of early dawn shone through the window, The Round Cat was already awake. She hadn't moved; she was still remembering the escapades of her dream. While she knew it was just a dream, she also knew that she was not the same. She thought again about her mother's words. Her talents were tools for her to use in life. It was up to her to find out how they could be used. She was special; her mother had told her. But today there was a difference: she felt special. She remained curled up in her round bed purring loudly until her mother called her for breakfast.

The rest of the family was already at the table when she came down the stairs. Everyone turned as she climbed into her chair; they were not sure why or how, but she looked different today. No one even thought about teasing her about her appearance. It probably would have made no difference anyway. Now she was special. They could all feel it. The smallest hint of a smile on her mother's face let The Round Cat know that her mother understood.

Learn to improve your self-image, use your unique talents, find your place in the natural world, and fulfill your purpose in life while being entertained by the antics of this very special cat.

As a kitten, The Round Cat gets teased by her brothers and sisters, gets in trouble at school, plays with her friends--a squirrel, a Mastiff puppy and a terrier mix-- and pushes her mother as far as she dares. She learns that inner beauty is more important than outward appearance.

The Round Cat’s great adventure begins when her mother sends her out on her own. She learns from each animal she meets until she finally encounters a pack of junkyard dogs. With her life in jeopardy, help comes from a surprising source. When The Round Cat finds a home, she shares her lessons with her new family and changes their lives. Will she change your life, too?

Susan Eldred learned about the interrelations in nature while studying biology at the College of Wooster. This understanding was furthered by camping throughout the Midwest as a child and observing the local wildlife at Platte Lake where she and her husband live with three dogs and three cats.

Susana Green studied at Ringling College of Art and Design. She spent childhood summers on Platte River where wildlife is abundant. Illustrating a children’s book has long been one of her dreams. She lives there with her husband and two rescued cats.