Meditations From A Country Life 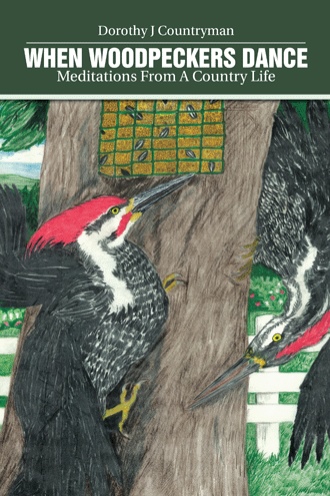 There’s magic on Christmas morning, when the air is crisp and the sun sparkles on the lightest dusting of snow. It is then, several times over the course of the years we have lived in the country, that we have seen the pileated woodpeckers. Shy and cautious, they appear out of nowhere and pursue one of the most curious rituals in the world of birds: they dance on the sides of the dead oak tree at the edge of our yard.

Pileated woodpeckers are the elusive royalty of the woodpecker family. Their cousins, the ivory billed, known as the “Great God Bird,” were declared extinct some time ago, although one occasionally hears claims that some birder deep in the Southern United States has spotted one in a remote place. We’d read that pileateds, too, were approaching extinction, that they were seldom seen, and therefore, must be very rare. Yet, here they were, dancing, red heads ablaze against the black and white of their own feathers, silhouetted by the sun filtering through the winter landscape. The pair of them circled the tree, flashy as any square dancers, promenading up and down, occasionally cha-cha-ing side to side, never leaving the trunk. There is a peculiar rhythm to their steps and as they thrust their heads forward or from side to side, we can almost hear the music that must play in their brains. It is clearly a dance of incredible intricacy and joy. Since that first Christmas siting, we have spied them at least once or twice a year along the edge of the yard. One spring morning as we prepared for church, we were stunned to find them just beyond the porch, dancing on the dead maple tree where we had set up a birdbath on the stump. We continue to hear them when they are not visible. Their jackhammering of nearby trees alerts us to their presence, and they always visit, rare, beautiful, consistent, on Christmas Day.

Tom Smith was one of those individuals who comes into our lives for a time, and touches us with magic. Like the woodpeckers, he was rare and consistent. Although he is no longer present on the earth, he will never be far from our hearts. His dance goes on in the stories he left behind. It is a pleasure to honor his memory with this small volume of meditations.

To everything there is a season, and a time to every purpose under heaven.—Ecclesiastes 3:1

I’m a writer, and sometimes, no matter where I am, I just have to write. I don’t always get to do it when I want to, but there are certain settings that just seem to beg me to pick up my pen or pencil and get to work. More often than not, that setting is my front porch in the summer. In the winter, it’s apt to be any place where I can settle with my pad of paper and a cup of tea. My students have heard about this predilection to compose without a computer keyboard and many of them find it disconcerting because the majority of them are not writers who feel compelled to get words onto paper.

And, sometimes, I write in places people don’t expect. When I visit college campuses as a chaperone for drama conferences or to attend a teacher’s program of some kind this often happens. It may be because my psyche remembers all those nights sitting in libraries working on reports, and afternoons on wooden benches analyzing Shakespeare with a buttery yellow sun warming my back and Spring wafting about me on the slightest hint of a southerly breeze. In this situation, I almost have to write, and so it’s not unusual to find me doing so.

The students I encounter in these situations may be ones who remember me from earlier conferences and meetings. My gray hair is almost silver now, and many of them recall it even if they can’t remember my name. It doesn’t matter; they feel at ease and so do the teachers who stop to enquire what I’m working on, or to chat about their experiences, their problems, and their triumphs. Oftentimes, the young people are lost or terrified, and they don’t want their friends to know, so they sidle around and ask for help in lowered voices: “Where do we go for lunch?,” or “I’m really nervous about this audition, what will happen if I faint?,” or most telling of total bewilderment: “Do you know anything about this place?” When I have shared what I know or can surmise and have sent them on their separate ways, I turn again to my notebook. But often it is not long before they begin to return, beaming or in tears, trusting me with their triumphs as well as their failures. When they’ve succeeded everyone can hear them: “We just got called back ” or “They really like us ,” or “I think I really did alright ” All these are announcements that any drama coach would recognize as good signals from aspiring thespians. But sometimes what is more important is that moment of recognizing failure: “Miss C, I just don’t get how they judged me,” or “I froze, I couldn’t remember my lines for anything,” or “Are you disappointed in me?”

I sometimes think how lovely it would be if adults were as inquisitive and trusting as children sometimes are. These days we’ve all but frightened the trust out of them, and rightfully so in some situations, but a child who looks up at you with total trust in her eyes is still a marvelous thing, and within the church family, that look should be more common than not. Those children who are not afraid to admit their fears, their hopes, their dreams, are the ones that Jesus said would lead us. What if adults could learn that trust again? What if adults could overcome the notion that revealing vulnerability is a bad thing? Would we then be more sensitive to the truly vulnerable? Would we be more willing to help the struggling Christian, the disaffected Christian, or the seeking non-Christian? What wonderful things might happen if the conservatively silent Christian were to shout for everyone to hear: “Jesus did this for me ” or to ask, “I’m afraid; can you help me sort out this problem?”

I have written this book, not just to honor a dear friend, but to share the message of an incredible God. He is the God who saved me, not only from the terrors and uncertainties of this world, from emotional and sometimes physical abuse, but from myself and a host of insecurities, as potent as the butcher knife I held at my throat one night when I was fourteen and full of despair. The work He told me He had for me to do that night included learning to observe the world He created, to understand how it showed His presence, and to share the insights gained from that observation with others who might be struggling just as I was. He placed at my disposal a thousand metaphors in the behavior of the creatures and the beauty of the planet. He made me aware that there are seasons of the heart and the soul, just as there are seasons in the year. These two types of seasons do not always mesh, and in these writings that is also true. Still, He made me know, absolutely, that no matter who else was NOT nearby, He would never leave me, and so I would never be alone regardless of the time or place or circumstance.

When Woodpeckers Dance is a collection of stories from several years of reflection on the author’s experiences living in southern Ohio and northern Virginia. In each of these stories, the behavior of God’s creatures is used to show His presence in every aspect of our lives, with the goal of reassuring and strengthening the reader’s walk of faith. Original drawings by Terri L. Sublett illustrate the text.

Dorothy J. Countryman is currently music leader of the Belfast United Methodist Church near Hillsboro, Ohio, and devotes her weekdays to the care of rescued animals, and to trying to see God in every facet of life. Trained as a journalist, proofreader, and book editor, she is the former editor of The Judicial Staff Directory and the Biographical Directory of the U.S. Courts, both published by Staff Directories Ltd./Congressional Quarterly. She proofed text for submission to the Securities and Exchange Commission while employed at Bowne of Washington, DC, and has independently proofed and edited numerous academic and fiction books, as well as being a news editor and feature writer in both Virginia and Ohio for many years. She has taught writing and literature at the high school and college levels, and holds degrees in journalism-communications and English from Xavier University, Cincinnati, and Miami University of Ohio.