Your Faith Determines Your Future!

Lifting the limits off your life 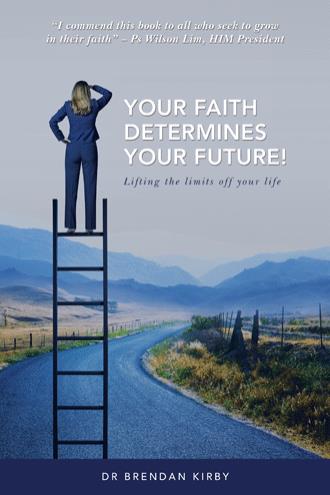 Now thanks be to God who always leads us in triumph in Christ, and

through us diffuses the fragrance of His knowledge in every place.

You can do great things. Your potential may be unrealized at the moment, but a latent seed can still grow and produce much fruit!

In August 1989 I started work as a Research Scientist for the CSIRO Division of Wool Technology in Geelong. After 12 months instead of making my position permanent (as previously promised two times by my boss) I was placed on extended probation in order to assess my work further. After another three months my superiors unofficially sacked me. (The official letter had not yet been signed off). It was a devastating blow. After ten years at university it was now all to no avail. I wondered if my life would ever recover. My reputation would be shattered. I had three months employment remaining – my research leader did not care if I came to work or stayed at home for that duration.

After praying to God for my work that night with David Bernard and friends at a local bible study in Williamstown I received fresh courage. I arrived the next morning to work at 8am much to the chagrin of my boss, determined to overturn this decision. For the next three months I worked as if my life depended upon it – and I prayed like I had never prayed before, drawing upon all the trust and faith in God that I could. During this time the assistant chief of division invited me into his office and recommended that I resign because it would smooth things out – they would not have to sack me and I would not have that “blot” on my record – but I would have to admit that I could not cope with textile research. I felt like I was in the middle of the plot of a Hollywood drama – except my life really was at stake! I rejected the “kind” offer of the assistant chief and he reconciled himself with having at least tried to help me. I was even more determined to show that I could succeed in this work – not knowing what lay ahead. But I prayed and worked – knowing in my heart that somehow God would work things out.

Towards the end of those three months my determination to “save my future” eventually paid off into my being given a three year research fellowship. This was one of the biggest miracles of my life. Subsequent to this God-given deliverance my three line managers still conspired against me by assigning public staff presentations to me they were confident I would do badly in. Those next three years were some of the most intense in my life!

But I held on to the belief that God would give myself and Nick Sokolov (the eccentric but brilliant engineer from Footscray) excellent results in our worsted rectilinear combing research project (Dan. 2:21,22). After another two years or so we were actually leading the world in combing production rate research. This remarkable turnaround of events stunned our division, and our research presentations solicited huge interest. Some of the mathematics that was derived during this work was later published in one of the world’s leading textile research journals (J.T.I. 95 (2004) 261). This publication established the results on credible international grounds.

God came through and changed my future because I chose to believe and fought for my job, my self-esteem and my faith. It was very difficult, it was extremely stressful, but with God all things were possible.

No matter how defeated you may feel today, despite the rejection and negative words you may have experienced, you can still arise out of your ashes and achieve victory in your life with God’s help.

Jesus said "all things are possible to him who believes!" Mark 9: 23 NKJV What would we like to achieve with the rest of our life? What dreams do we have which are still embryonic? We want to stir your heart to believe again! Life is worth living because God loves us and wants the best for us! Dr Kirby leads us on a journey of growing in our faith where no matter what our background, our failures or our limitations, we can come to a place where we can believe that God will work with and through us to do amazing things! The Christian life was never meant to be dull but an exciting adventure with the Creator of the Universe! What Readers are Saying about "Your Faith Determines Your Future": Over the years I found Brendan to be a man of faith and integrity, and a man who loves the Word of God! … I am sure you will find this book to be insightful and practical for your faith journey! —Ps. Andrew Evans (rtd), Senior Pastor, Influencers Church, Paradise SA I have watched Ps Brendan’s journey of faith for more than fifteen years. … I have ministered with him in India and Africa, and I have seen him practicing what he preaches. He is genuine! This book is not just good learning, but it challenges you to do it! —Ps. Simon Eng, Elder, Hope International Ministries (HIM) I highly commend this book as a journey guide to anyone who is on this journey of faith. —Ps. Benny Ho, Faith Community Church, Perth, and Leader of D-Net Network of Churches. Dr. Kirby’s helpful book … is scriptural, practical, and well reasoned. It … unpacks the subject of faith from the scriptures with the logical mind of a physicist and laces it with faith-inspiring illustrations from personal experience that helps move the reader into faith. —Ps. Chris Liew, New Life Christian Community, Adelaide. So much wholesome teaching has been compressed into this book that would inspire any Christian at any stage of his or her faith journey. Hence, I have no hesitation in recommending it to the reading public. —Ps Jane and Abraham Haastrup, Overseers of Redeemed Christian Church of God (RCCG) Australia and South Pacific

Brendan and Helen Kirby are the founding pastors of Hope Church, Adelaide, which they started 23 years ago. Brendan has responsibility for about 300 HIM churches in India and Africa. He has been a member of the Australian National Executive of an apostolic church planting movement called Hope International Ministries (HIM) for 12 years. Brendan has a humorous and funny nature, loves the bible, and is passionate about international missions spending about 5-6 weeks each year conducting pastors and leadership training and outdoor crusade meetings.