Glimpses of Grace in Georgia

A true story of finding God’s favor, love and forgiveness 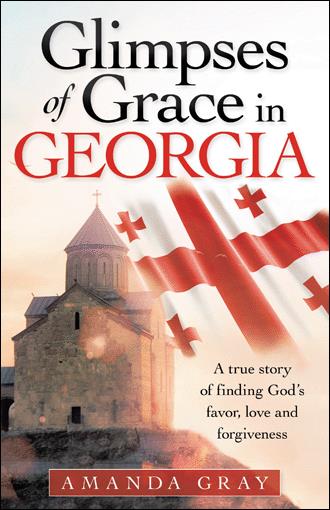 “I have told you these things, so that in me you may have peace. In this world you will have trouble. But take heart! I have overcome the world.” John 16:33 (NIV)

Vividly I recall the first few months of my life in Georgia. Never have I experienced such absolute sadness, and prayerfully I will never again. The days felt like years; as the days, though short, felt like the earth stopped spinning around the sun. One particular night a few weeks into our move to Georgia, I felt my entire world come crashing down. It was almost too much for a twelve-year-old girl to handle, yet somehow I managed to get through the night.

My soul was dying in a vast ocean of darkness. I felt the life being sucked out of me, as the tears spilled onto the pages of my journal. I blamed myself for bringing this suffering to my very being. My silent cry was only heard in the form of pencil scratches. My voiceless call for help was made known to no one but my trusty journal. My efforts were fruitless; no one was there to actually listen.

And to think I welcomed this newness. I wanted a change. I desired to leave. I wanted so desperately to get out; to leave behind the dark dragon of my sin, hopeful it would lose its grip on me. But that dragon pursued as if I were its prey. I thought I escaped, but those feelings of guilt haunted me and lurked in the shadows in this dismal country.

“The power of the darkness is strong when you have no weapon to use against it...”

My body trembled with a vigorous shiver as I pulled my journal closer to my chest, and re-adjusted the hand-made quilt over my head that had begun to slide off. I imagined I looked like an Eskimo, as I had wrapped the blanket tightly around my head to keep in what little heat my body produced. There was a draft in my room coming from the wall opposite my bed. The double doors led out to a balcony that had been converted into another room, where my sister slept. If I was this cold, I wondered how Tasha was able to survive being that much closer to the drafty windows. On cold nights like this, I would stick my feet in between the blades of our electric radiator to quickly warm up my toes. Alas, it only worked when the power was on.

I laid on my stomach, pillows propped up my chest while all the weight of my upper body leaned on my left arm as my right penned out my woes of the day in my dear journal. My only companion. The one whom I spilled all my darkest secrets.

Tears began to stream down my face as I reminisced about the happy memories of my middle school friends. Did they miss me like I missed them? Would they remember me in a year when I returned? Would they treat me the same or any differently? The school I attended now wasn’t anything like back home in Ohio. There weren’t any kids my age. Even if there were, not one spoke a lick of English. Well, except for the standard, “Hi, how are you? Vat ees your name?” That was the standard greeting of the little kids from our school. Even after telling them our names they would run away snickering, only to return moments later with the same canned English questions. It grew old rather quickly. I wished I could have a best friend again, like I did in Ohio.

Katie was my best friend. She lived next door to me, and we would do everything together. I remember the first time I met her. We had just moved into a white-shingled, two-story house in Ohio, and had unpacked all of our belongings from massive cardboard boxes. We threw them into the garage to be properly disposed of later. Well of course, I thought it was a perfect game to climb to the very top of the cardboard boxes that were stacked to the ceiling of the garage. Katie peered in and watched me around the corner of the garage door, which was open as I played princess and the pea. My sisters were off doing something on their own. I was perfectly content to play by myself.

“What are you doing?” she inquired. I looked up and saw a girl about my age, wearing a white helmet, and one-size-too-large knee and elbow pads standing near the open garage door. She was riding her bike around the block when she saw the moving van and heard my voice inside the garage. Katie decided to come say hi. Her dark brown hair peeked through in all directions from her helmet. She was a skinny girl and tall for her age. Her bright white smile looked back at me as she laughed at the sight of a little girl who had climbed the top of a cardboard box mountain.

She looked like she wanted to join in the fun. So I replied, “Playing princess and the pea! Do you want to play too?” Without hesitation she jumped onto the top of the stack with me. We began to imagine it was an ocean wave, and we were surfing on top of it. It was the beginning of a life-long friendship with my best friend, Katie.

Now, she was just a memory and my journal was my only friend. Perhaps a better friend than I had ever had. I could tell my journal things that I wouldn’t share with anyone else. I never had to worry if it would spill my secrets as gossip to my best friends. Although there was no preventing anyone else from reading it, which was why I always hid it away when I left my room. I didn’t want to give my older sister, Jill, any more ammunition to make fun of me. Or worse yet, my parents would know that I kissed a boy the last day of school before we moved.

Chris was my first “boyfriend,” although if my dad ever found out he probably would have killed us both. The most we had ever done was hold hands in the halls to and from our classes. He would meet me at my locker and escort me, like a pure gentleman, to my next class. I would daydream about him in class instead of listening to the teacher, taking mental note of his messy, long bleached-blonde hair, and his nerdy black-framed glasses. Then I would secretly write long notes with my gel pens. Some classes you had to be extra careful. The teacher would eye us from the corner of the room to make sure we were doing our assignments. Up until that day I had only heard that Mr. Smith was mean and read notes out loud to the entire class to publicly shame the girls for not paying attention. Some were really bad, some downright naughty which in turn would get the author sent straight to the principal’s office. It was my last day of school; we would be on an airplane about this time tomorrow. I wasn’t planning on kissing him—that was until my friend, Maddy, leaned over to me and whispered, “Chris is really looking forward to this afternoon.”

With a puzzled look on my face, I wondered what he could be excited for. Was he excited for me to leave? It was my last day after all. We had been going steady for a few weeks now, I would think he would be sad for this afternoon. “Because it’s my last day?” I whispered back with a furrowed brow, confused why she would say he was excited.

“No!” she said almost too loudly, and instead went to a piece of paper and began to pen out something in secret to me. Obviously, it was too sensitive to say out loud where others could hear. After she was done writing, she put her pen down quietly and looked around the room to make sure the teacher or others couldn’t see. She then flipped the note upside down and slid it across the table to me.

I gingerly lifted a portion of the note off the table, like it was a card in a poker game. Underneath was written in golden gel pen the words, “Chris says he wants you to kiss him!” My heart fluttered at the sight. A kiss? I’m not sure I was ready for that. Suddenly, a classmate jumped to his feet and snatched the note from my hands. “Mr. Smith!” he yelled, “Maddy and Amanda are passing notes in class!” He raised the note high above his head, and shook it vigorously back and forth as if it was a flag waving in the wind.

Glimpses of Grace in Georgia is an incredible true story of how Amanda and her family were taken from suburban America and brought into the heart of a former Soviet, third-world country during a time of economic turmoil and political instability. In this exciting memoir, Amanda outlines the struggles of living in a foreign country and how God miraculously provided for her family during this dark time.

Amanda Gray is a web developer in Virginia with an exceptional story about her experience living in Georgia from the years 2000 to 2003. Early in her adolescent life, Amanda faced a number of unique challenges, yet found an abundance of God’s grace through it all.