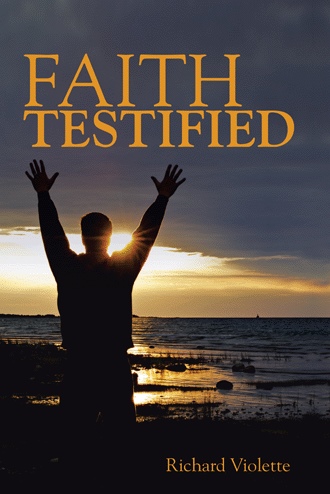 A prayer for today…

God, may we always remember… if we feel we are standing in darkness, we can take one step in any direction and be standing in Your light. For Your light is stronger than the darkness of evil. It is up to us to make the choice to take the step. One of the many great gifts You gave us was the power to choose. May we all choose to step into the light. Amen.

Why was the subject of God’s light so heavy on my heart that day? I felt inspired by the song “We Are” by Kari Jobe. I had listened to the song probably a hundred times but on that day it was like I was hearing it for the first time. “We are the light of the world.”1 The first line in the chorus. Amen!

God’s light is pure and strong but isn’t something we can physically touch so He puts it in things we can: in nature and in His children. We not only can help to spread His word but we can be someone that helps another. When a friend, family member or even a stranger offers to help you, that is God talking or working through them to get to you. He also encourages and inspires us through outlets like music and the beauty found in nature.

What about the sun? Science tells us it is a star at the center of our solar system. It gives off heat and light as part of its solar energy. I believe God created the universe and so created the sun. “God made two great lights--the larger one to govern the day, and the smaller one to govern the night. He also made the stars.” Genesis 1:16 NLT It provides for one of the necessities of life for all creatures great and small. We need it to grow. We need it to survive.

If the sun suddenly no longer existed, could we as humans survive without it? Perhaps physically but not mentally. We have all heard of seasonal effectiveness disorder. It is that period of time during the winter, particularly for New Englanders, where the days are shorter and due to the colder temperatures, less outdoor activity. We are lacking exposure to the sun. There is mental strain for people that work in a cubicle all day or underground where their bodies are not exposed to the sun. When it is cloudy all week, aren’t we all impacted? Don’t we get a little stir crazy or a little cranky? Doesn’t the weight of the physical darkness, in turn, create darkness for us mentally?

For science fiction fans and comic book readers everywhere, who doesn’t know the character Superman? There have been many television and big screen adaptations to the popular comic book character. I have seen a majority of them and at least one thing remained consistent, the source of Superman’s power was the earth’s sun. I can remember a Superman television series in the 1990’s called Lois & Clark: The New Adventures of Superman. In one episode, the villain believed removing Superman’s access to the sun would make him vulnerable. In fact, there was one part of the episode that he lured him into a bunker or silo of some sort reinforced by metal and concrete and exposed him to a massive explosion. Superman no longer possessed the strength to escape the silo due to his lack of exposure to the sun.2 We all know there is a happy ending to this episode but look for a moment at the spiritual symbolism to something written in science fiction. Superman became overwhelmed by darkness further exposing his vulnerability.

For a Christian, that darkness is the enemy trying to work his way into our minds, hearts and souls. Nothing would please him more if all the light was removed from these areas of us. Think of a shade or curtain covering a window. We know by opening the shade or curtain we can let the light in. By the same token, even though we know the light is on the other side, we can choose to sit in the darkness. If we sit in the darkness too long, it becomes harder to stand up. If I sit for too long in any circumstance, it is more difficult to stand up. But, in all seriousness, the darkness becomes too easy and the longer the window is covered, it begins to become a wall. Even if the wall is made of brick or steel, it is never too late to tear that wall down. God is always there to help you on the inside and there will always be others on the outside ready to help when you are ready.

Here is my first challenge for you and I promise to go easy on you: identification. Find one thing that sits in the darkness of your heart. Remember, this is just to identify it. Did you ever play the game Scattegories3 where you roll the letter die and have to come up with 12 different answers to categories that begin with the letter on the die? I remember a category about finding, or “identifying”, something in the room. When you try to identify the darkness in your heart, you may have to look deeper but I know you can do it. I feel like I have grown tremendously since I began my walk with God but I know there is still darkness in my heart. One thing I can identify is anger. I see it in my past and it tries to control my future but I will go more into that later.

Let’s see what our friend John has to say about this:

“The light shines in the darkness, and the darkness can never extinguish it.”
John 1:5 NLT

We have all wrestled these questions. With encouragement from my wife, I began to write prayers and devotionals in a journal as it related to my faith and belief in God. That turned into this. I have found it helpful reading or listening to others share their experiences and how it relates to my own situations. That is the purpose of this book, or, specifically, why it was God’s purpose for me to write this book. Was it part of God’s plan for you to pick up this book to read something from it that relates to your life?

My hope and my prayer for all of you is to know your lives have meaning, to believe. It helped clarify my life’s meaning when I began my walk with God. I believe it can for you as well.

Richard resides in New England with his wife and family. In addition to being a devoted family man, he attends and serves his church weekly, continually growing in his faith and walk with God, believing in the love of Jesus Christ and each life’s great purpose in this world.