Under the Southern Cross: the New Testament in Australian English 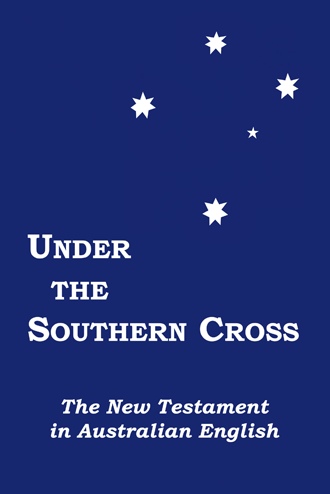 In the tradition of the American and British Bible Societies, Under the Southern Cross renders Paul's classical statement on justification (Romans 3:21-26) in user-friendly language, as follows:

21 Now, however, quite apart from the Law, the way to a right relationship with God, attested to by the Law and the prophetic writings, has come to light, 22 a right relationship with God through faith in Jesus Christ for all who have faith. For there isn’t any difference: 23 since all have sinned and fall short of God’s glory, 24 they are brought into a right relationship freely, by his grace, through the liberation purchased by Christ Jesus. 25 God put him on public display as a reconciling sacrifice though faith in his blood to demonstrate the rightness of his action in pardoning sins committed previously 26 —due to God’s clemency. It was to demonstrate the rightness of his action at the present time, so that he might be both in the right himself and the One who brings a person into a right relationship as a consequence of faith in Jesus.

In recent decades, the distinctiveness of the English spoken in Australia has been recognized by the production of dictionaries and grammars of Australian English. Given the widely acknowledged recognition of the role played by Christianity in the colonizing of Australia by the British, and in the subsequent development of the nation, it is appropriate that the New Testament writings should also be available in Australian English.

Under the Southern Cross is the first published translation of the complete New Testament from the Greek of the original into Australian English.

Undertaken by Dr Richard Moore, who lectured in New Testament for some thirty years, it expresses in the everyday English used in Australia the twenty-seven writings making up our New Testaments.

The translation is based on the Greek text prepared and distributed throughout the world by the Bible Societies.

Born in Perth, Western Australia, Richard Moore (BA, MA, DipEd, BD, PhD) lectured in Biblical Studies in Queensland, Australia (1974-1978) before becoming Head of the New Testament Department at the Baptist Theological College of Western Australia (1979-2002), now Vose Seminary, and a Lecturer in New Testament at Murdoch University (1986-2002). His areas of specialization include the doctrine of justification (in Paul, in its historical development, and in English translations), the Synoptic Question, the historical geography of Acts, and the use of the Old Testament by the authors of the New Testament. Richard and Kathleen Mack married in 1965 and have two sons and a daughter, four grandsons and one granddaughter.

In retirement he continues as a Research Associate at Vose Seminary, publishing in the field of New Testament.