Sometimes we have No Choice 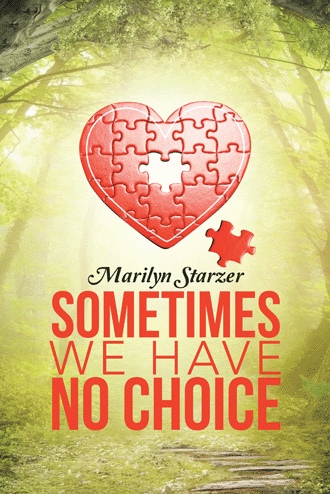 Six years after they were married, Roger and Leah Kerry fulfilled his wish to move to Alaska. A year later, with three small children, he had his first heart attack requiring lifestyle and diet change. Traveling for work made it difficult as great chefs were brought in to remote sites to keep workers happy. Leah attended seminars and nutrition classes attempting to do the same and keeping him healthy. However, at age fifty he had his first open heart surgery and six and a half years later learned they were blocked and necessitated the second one. Five days later he had a stroke which is where the book begins. Soon he made the decision to take an early retirement and leave the Alaska he loved as the stroke had left him unable to get his words out fast enough and he often could not think of the word he wanted..

People they encountered knew little about how to treat a stroke victim and often treated Roger as if he were hard of hearing or worse, mentally impaired. That was especially difficult as he was a very intelligent man having supervised numerous building projects and had handled millions of dollars in construction. Leah had learned to handle many things while he traveled, and now learned to speak up when trials came on them from sales people. The fear of losing him had her in turmoil and totally dependent on God. She would try any suggestion as long as it couldn't harm but never knew if any of her efforts were of value.

Travel with them as they make the move into the Pacific Northwest attempting to stay in the area they loved but learning fate was not finished disrupting their lives. Unable to fulfill Roger's plans for improving his golf game and extensive travel, they made alternative plans and did what he was able. They found ways to deal with each challenge and found life could be good in spite of foiled plans.

After surviving a helicopter crash for seven years, a calcified heart valve made Roger say "No more" tests or surgery. He knew it would only postpone the inevitable, could not restore what he had lost and he was tired. Going into Hospice care he maintained control just as he always had. Visitors were amazed at his cheerful demeanor and lack of complaint. Many stated to Leah after visiting him that he had taught them how to die with dignity.

After his death, she became a Grief Recovery Specialist helping herself as much as others. She observed how much sharing experiences and learning you were not alone could help deal with unpleasant ordeals and decided to write this book as therapy then decided to publish it in hope it would help others.

This book is an attempt to share our experiences, good and bad, and what we learned with other stroke victims and their caregivers to prepare them some. Strokes vary in type and intensity and there is no way to really prepare but a positive attitude on part of all concerned is a definite advantage and a faith in God will carry you through.

Open-heart surgery was a frightening experience that brought many challenges to our family and marriage. Many medical professionals guided the recovery. The multiple strokes were much more challenging when hearing so often, “We will just have to wait and see.” That statement became almost profane as each day presented new problems to deal with. Strict diet, exercise, and therapy required becoming nurse, dietician, counselor, and warden, as well as wife. The attitude of the victim and the caregiver makes all the difference. Keeping positive was a necessity, though it was often difficult. Remembering Philippians 4:13 became my daily encouragement: “I can do all things through Him who gives me strength.”

Marilyn Starzer worked in public relations, customer service, and market research before getting married. While raising her children in Alaska, she did volunteer work fund raising for cancer research, crippled children and adult care, and she taught crafts at a nursing home. She spent a year after her husband’s death feeling isolated and alone. She later attended a grief recovery class that helped her so much she became a certified grief recovery specialist to assist others. Observing how sharing experiences helped there, she decided to share their experiences with strokes through this book.