What’s Love Got To Do With It

Popular In The World And Powerful In The Church 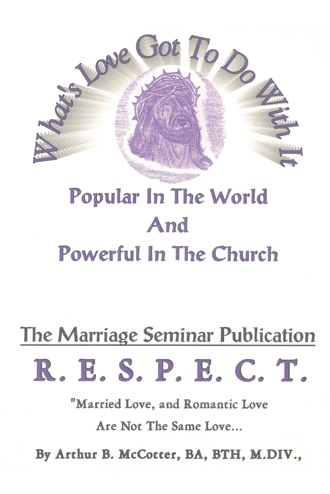 The History of Marriage and The Bond of Matrimony are a fascinating subject, and for many people, among whom I number myself, it is a Spiritual Bond between Christ and The Church, and a Man and a Woman.
It started when God said in Genesis 2:18, “It Is Not Good That man Should be alone:; I will make him an help meet for him.”
A number of individuals who are Husbands, are not living by the commands of Christ in Matrimony and are demanding that their Wives submit to them. Ask yourself this question, “How can she?
Many a tear or tears have been shed because of the lack of understanding, the meaning of the words Married Love and Romantic Love are not the same Love.
The work of the Creator of the Holy Estate of Matrimony featured in the pages of this book, merits our recognition and love.
Strong Marriages, those based on Christ, are important and needed desperately in our Emerging Society today.

The history of marriage and the bonds of matrimony is a fascinating subject, and for many people, among whom I number myself, it is a spiritual bond between Christ and the Church; and a Man and a Woman.

It started when God said in Genesis, 2:18: “It is not good for the man to be alone. I will make a helper suitable for him.” God’s command was a simple test for man, but it was extremely necessary. God created human beings to be His own companions and friends. He does not desire as companions those who must obey Him, like toy soldiers that are moved about and cannot help themselves. He wants those who love and obey Him of their own freewill. Those who are husbands are not living by the above command and are demanding that their wives Submit to them. Ask yourself this question: How can she?

Many a tear has been shed, because of this lack of understanding. The meaning of “married love” and “romantic love” are not the same love. The work of The Creator of The Holy Estate of Matrimony featured in the pages of this Book merits our recognition and love. Who so findeth a wife, findeth a good thing, and obtaineth favor of the Lord. God created marriage and pronounced it good. Strong marriages, those based on Christ, are important and needed in today’s society. Jesus first miracle was at a wedding.

At the age of eight (8), he moved to Glassboro New Jersey with his Mother, his Brother Samuel, now deceased, and his Step-father, Joseph Gillis, now deceased also.

Upon graduation from High School and from College, Arthur moved back to New Bern with his Grandmother, Mrs. Rosa Odom McCotter Bryant, now deceased.

At the time of the writing of this Book, the writer is incarcerated at the Franklin Correctional Center, Franklin County, Bunn, North Carolina.

My brother and I both were incarcerated when our mother died in 2008. My brother Samuel Dewitt McCotter died in Federal Prison in 2011.

For me, life started falling apart upon the death of my only son Kevin in 2007.

In 2008 I lost my mother and I felt as though God was punishing me by taking people I love from me.

While writing this Book on the two categories of Men, I found myself in every aspect of Promiscuity while married with children, getting children out of Wedlock, and shacking-up-with women who thought I was going to marry them, and living dangerously and recklessly showing no respect for those ladies, nor myself. I feel I am, from past affairs A Mess-up-Ologist, if there is such a word.

I urge every man reading this book to stop, take an Inventory of your marriage and of your family situations.

I am blessed that God spared me for this purpose and for the task before me.

As a married man, you have to leave those outside women alone. Take it from experience; I was like a baby at a Candy Store. If you know that you have a good Lady, a Blessed Lady, I would like to advise you to put a ring on her finger, and live with her like you are living with The Queen of Sheba. She’s your Queen so treat her as such. Learn to appreciate a good woman. They are hard to find, so as Joe Tex has said, “You had better hold on to what you got, because if you don’t some man will have her before you can count 1, 2, 3,

You will never know what you had until you are in the situation I am now, and then you’ll wish for her to come back, but she’s long gone now, because of the way you treated her.

God has allowed me the chance at numerous opportunities to be the first at:
1. The Delinquent Tax Collector for Craven County, New Bern, North Carolina as an African American;

In spite of my strides in Society, my track record was not good. God has allowed the blood to continue to run warm in my veins.

In 1988 a friend, Attorney Calvin King, purchased two Charter Buses that I operated. At the time Rev. Jesse Jackson was running for President of the United States. I was honored to have been the Driver of the Bus he was traveling on to the different State. He was in North Carolina to speak in Raleigh, Rocky Mount, Greenville, Winton Salem, and a few other places. I also had the privilege and the honor of escorting Mrs. King on the Stage, and standing besides her holding my arm while she shook hands with the people.

See how God continued to bless me, but I still had not given God His due diligence for all His blessings He was continuing to shower upon me.

Prior to my Incarceration, I was an African Methodist Episcopal Zion (A.M.E.Z.) Pastor and the Bishop’s Aide to the late Bishop Alfred Gilbert Dunston, Jr., from 1987 to 1992.

I traveled with Bishop Dunston to Conferences in the States, The Virgin Islands, speaking engagements at Military Bases, and other venues. The vast knowledge I gained while in the Bishops presence will never be forgotten, and that of his Associating Bishops.

It is easy to look at people and make quick judgments about them, their present, and past, but you would be amazed at the pain and tears a single smile hides. What a person shows to the world is only one tiny facet of the Iceberg hidden from sight, and more often than not, it’s lined with cracks and scars that go all the way to the foundation of their soul.