by Joseph A. Nosak 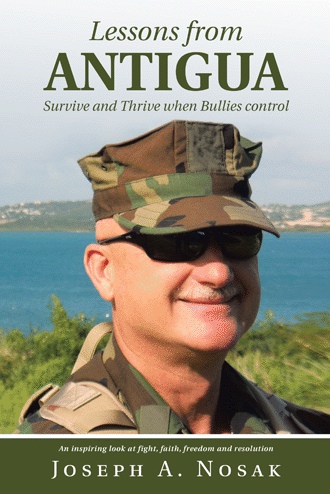 It was during a breakfast conversation at the19th Hole Grill in Port Hueneme with my deployment friend, Tracy Troxell, when I realized I wanted to address others as men of honor.

Tracy was disgusted, “I can’t stand how the L.P.O. (leading petty officer) is talking down to everyone. He calls everyone his bitch.”

I was thick-skinned and expected to lock horns with this person because I had to work with him, so listened to him gripe. He continued, “He is so negative. When they all get together, all they do is run other people down. I can’t stand it.”

I knew this was true because I had been by the smoke hole (designated smoking place) and heard some of this conversation, I already knew the people I was going to avoid over the next year because of what was coming out of their mouths.

Troxell reared up. “We gotta do something about this. LT. (Lieutenant) isn’t going to do anything; he just thinks about himself.”

I finally had something to say. “He’s amused by them; they’re useful idiots. He’ll use them to get what he wants.”

Troxell looked deep into his coffee cup. Things didn’t look good; we had already lived this scenario before, but the food had arrived and we took a few minutes for a pleasurable diversion. (If you visit the 19th Hole Golf Club Restaurant in Port Hueneme, California, I recommend the classic corned beef hash.)

We were both tired of the verbal abuse no one was doing anything about. We recognized we had a choice in this matter, even though we were outranked and outnumbered. We set out to do something different and the first step would be to speak to others with respect.

The conversation flowed over to the other side of the table where the two Sanchez brothers were sitting. They had also noticed the abuse that was flowing unchecked in public gatherings and they also wanted to invoke change.  We talked about starting a “Men of Honor” morning meeting where we would talk about the positive aspects of military service and encourage each other, but Carlos Sanchez shipped out before we could meet again. Troxell and I would have to begin our adventure without him.

Not only would we physically explore places where local folks said, “There is nothing down there,” we would also explore the possibility of making a difference among our ranks. No one was exploring this opportunity, either.

So my experiment begins. Over the next year, while evaluating job progress from a quality control perspective, I aimed to modify the emotional temperament of the group, starting with planting seed thoughts. My job in Quality Control allowed me to address the men daily, walk among them while they worked, and address any problems that arose, while Troxell worked in group settings on attitudes with humor and encouragement. (Troxell is a former bar owner who can read a group’s emotional temperature in a heartbeat. He used the power of humor to keep fights out of his bar and make it a friendly place; this is an invaluable form of “emotional intelligence.”) Together, he and I made a choice to be servants to the lower-ranking members of our group (without them knowing it) and together, we became our brothers’ keepers. In the process of doing so, we became friends.

A fine line exists here. One can change a culture by bucking up against those who are creating it, or one can change a culture while supporting the leaders who are creating it. My support toward leadership never waned; never did I mention the words ‘bully,’ ‘tyrant,’ or ‘dictator.’ Instead, I talked about the power of choice, the benefits of being a servant and hard work. This would create a culture where the focus was on choices. These choices would involve a servant attitude, mutual respect, being my brother’s keeper, working for a paycheck beyond dollars, “riding for the brand” and other mini-lessons. It would always point toward having a strong positive attitude, working while free from resentment and reaching our goals.

I’m standing under a tree in Antigua and it’s my job to give the morning quality control talk. Men are sitting on benches encircling the tree; others are standing or lying on the ground. The local dogs are barking. Off in the distance, a barge is making its way across the bay with some land/sea shipping containers on it. The trade winds are blowing a warm, 80-degree breeze; we are in Paradise.

The superintendent said a few things about the daily scope of work, the safety guy reminded us about hazards and I’m going to talk about quality control. I’m always up last, and I like it that way. (A baseball coach will put the strongest hitter up third, so I felt like I needed to hit the first two guys in.)

Another reason I was up last was because the superintendent always tried to bully me into silence. He’d try to dismiss everyone before I got to speak, but I’d come forward and announce, “I have a few things to say.” He knew it was written in the Seabee Crew Leader Handbook that the crew must understand the daily construction requirements, so after some generally degrading statements, he’d step aside and go off for a smoke break. I always supported him and the plan of the day, only from a different perspective. He never supported my position, and I can only remember one time when he stayed to hear what I had to say.

Now it’s my turn to talk. I know what everyone’s thinking: what’s going to be said that hasn’t already been said? It was easy for them to imagine that there’s nothing new here, just the same old daily briefing, so I knew that I had to capture their attention.

The Lessons from Antigua can be a set of guidelines. They can encourage mutual respect, responsible action, and brotherly love among workers. They are taken from more than forty years of experience in the trades and my involvement in the United States Navy Seabees. The Lessons hold topics that can be talked about in a team setting. They include, but are not limited to, faith, fighting, freedom, and resolution. These topics are covered separately, at times together, and at times they overlap because life is like that—one part will overlap another.

The purpose of Lessons from Antigua is to raise awareness on how different thought patterns and approaches to managing men will be met with a defined outcome. It is not my intention to put down methods or management. They got us where we are today, and there are strong points in any or all methods. There are, however, areas in any style that can be improved, and that is where awareness is born.

Neither is this an idealist approach to work, because some men need to be led with a stick or fear of punishment and some respond better to a carrot or a reward. A rare few just need a problem to solve to be motivated. The emotionally intelligent part is determining when carrots are needed and when to put the stick away, or how to use more carrots and less stick.

Petty Officer Nosak spent thirty-seven years as a private and government contractor before being deployed at the age of fifty-five. He has earned degrees in practical theology and human development, and he is an ordained chaplain and Theophostic (God and Light) Ministry Counselor. As a BU1 in the Navy Seabees, he had the opportunity to be a quality control inspector. While in this capacity, he co-managed a group of men who worked with all their hearts. They arrived in the next country with expectations of doing great work and lived up to Seabee tradition.