Equipping Ourselves with the Armor of God 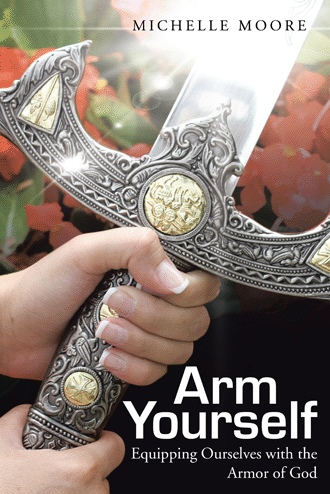 My Battle “For our struggle is not against flesh and blood, but against the rulers, against the authorities, against the powers of this dark world and against the spiritual forces of evil in the heavenly realms. “ Ephesians 6:12 I was standing in the middle of a valley. It was eerily quiet with the wind whipping around me. I felt scared, alone and lost. I looked to my left and saw an army of death. The riders on the horses were covered in black armor and there were frightening creatures near the ground floor that looked a lot like demons. They were full of hatred, anger, and looked to be ravenous. I was terrified. I looked to my right and saw an army of peace. There were riders in white, glowing with iridescence and the rider up front was the largest. He sat on a beautiful white horse covered in beautiful pearl like armor and held his sword up high. All around Him seemed to be angelic beings and everyone looked like they were ready for battle. But why? What were they fighting for? Then at once both armies ran forward hollering their battle cries and I felt as though I was stuck in the middle of a battle scene from Lord of the Rings. As they came closer, I realized something. They were coming closer and closer and I was standing in the middle. Then a realization hit me, they were fighting for me! It was all I could do to keep myself from running away, but my feet were stuck and I threw myself down to the ground and covered my head with my arms just as the two armies were about to collide and then… I woke up. Awake I was only nine years old when I had that dream. It was my first glimpse into the spiritual realm and the battle being fought over my life. I woke up with a sense of urgency and knew that a line was being drawn and I needed to choose which side, which army. I had already been dealing with terrible bouts of anxiety, depression and episodes of harmful thoughts. These terrible things were brought forth from some unfortunate events that happened to me just a couple of years prior. Unfortunately I was plagued with guilt and shame and fed the lie that it was all my fault. I had a difficult time learning to deal with such heavy emotions, thoughts and feelings that consumed me day in and day out. When I awoke from that dream I knew exactly whose side I would choose. I knew who I wanted behind me and I accepted the Lord as my savior at nine years old. I was baptized later that year on the Fourth of July. It is a day that will forever stay with me as I not only celebrate my freedom in this country but my freedom in Christ. I am grateful that at such a young age God called me, beckoned me, and I had the mind about me to answer His call with a resounding yes! But my testimony doesn’t stop there, no my battle had only just begun.

My eyes were opened to the spiritual realm at a very young age. As I go through the challenges and battles I have faced from early childhood through my young-adult life, I explore the weapons of warfare the Bible clearly lays out for us. As I journey through Ephesians 6, I explore what each piece of the armor of God protects and how to use it.

My goal is to impart wisdom from today’s difficulties the modern-day woman faces—marriage, children, financial hardships, weight issues—and divulge how spiritual warfare plays its part in all of these areas of life. I don’t want us to give up or give in to life’s ever-increasing demands, but to take back from Satan what God has given us! I challenge you not just to cope, but to Arm Yourself!

Michelle Moore is a wife and mother to two boys and lives near Dallas, Texas. She enjoys leading worship and bible studies at her home church, First at Firewheel, in Garland, Texas.

She has a degree from Collin College and plans to pursue wherever God’s will takes her.