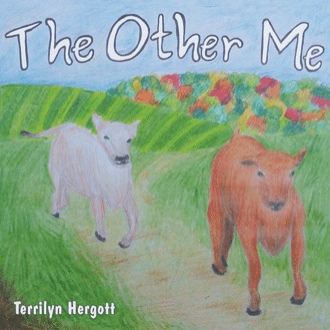 They weren’t big enough to leave their little stall, but they had lots of room to run around and jump and play. It was toasty warm in their stall. And cozy. The straw under their hooves was always clean and fresh smelling. They always had enough warm mash to slurp and fresh water to drink. They could hear their mother. They always knew she was right there even though they couldn’t see her. They were still too small to be outside their stall.

Cinnamon and Cardamom always curled up together when they slept. They needed to have each other right where they could see, hear, and smell each other. If they happened to roll apart in their sleep, they woke up and moved back together, curling around each other. When Cinnamon jumped and started playing, Cardamom joined in.

In fact, he began to ignore his brother when Cinnamon would play and jump and kick. When it was time to sleep, Cinnamon still curled up right next to Cardamom, because he needed to know that Cardamom was still there. He needed to feel Cardamom breathing beside him and smell his scent. But one time when Cinnamon woke up and nudged his brother, Cardamom didn’t nudge back. Cinnamon moved over and nudged Cardamom harder. He didn’t move. He didn’t feel very warm either. Something was wrong—Cardamom always nudged him.

All day, Cinnamon worried. Cinnamon ate when he was hungry and drank when he was thirsty, but he didn’t play. He kept nudging his brother and talking to him. But Cardamom never answered back. It was time to sleep again. Cinnamon curled up around Cardamom trying to keep him warm, but he just grew colder and colder. Two days went by, and then another. Cinnamon kept eating and drinking when he wanted to, but Cardamom stayed still.

Mama and Papa noticed that Cinnamon didn’t play like he used to, but when they asked him why he was upset, he didn’t tell them how he was feeling. Then, he would go away by himself and cry. He didn’t know what was wrong either. Mama really worried about Cinnamon. She knew Cinnamon was a good calf, but he starting doing stuff he knew was wrong. He didn’t listen when Mama or Papa told him to do something. And, sometimes, he didn’t understand the chores Mama or Papa had him do. He forgot how to spell simple words and got very angry when he couldn’t tie his shoelaces or print his homework neatly. He looked sad all the time, even when he acted happy and played with his barnyard friends. Mama went to see Grandma.

“Cinnamon and Cardamom lived together in the stall a long time,” Grandma reminded Mama. “He remembers Cardamom inside but doesn’t know why Cardamom isn’t with him anymore. Have you and Papa talked about Cardamom?”

“No,” said Mama. “I didn’t even realize that he still remembers his brother. Maybe that’s why.”

“When you go back to your pasture, talk to Papa about it. You need to talk to Cinnamon soon about his brother,” Grandma said.

Papa nodded. “I had wondered if that was the problem,” Papa said. “We need to talk to him. But, first you and I need to pray and ask God to give us the proper words so we can help Cinnamon and not make him feel even more hurt.”

So after Cinnamon was in bed, Papa and Mama prayed and asked Jesus to guide them and to help Cinnamon feel better inside his heart. They also asked Jesus to show them when the best time would be to talk about Cardamom. Several days passed. Cinnamon wondered, “Why am I alone? Why doesn’t Jesus take me to Heaven with Him? Why don’t Mama and Papa love me? I must have done something wrong; what did I do?” He burst into tears. “Nobody likes me. Even my friends don’t want to play with me.”

Mama and Papa went to see Pastor Clyde. They told him what Grandma had suggested and how Cinnamon was acting. Mama also said Cinnamon was not sleeping at night, even though he was so tired he could barely keep his eyes open. Pastor Clyde explained the natural process of grieving: denial, anger, bargaining, depression and acceptance. He told them that Cinnamon had never had that opportunity.

“Cinnamon remembers Cardamom because they lived together for many months. He is what is referred to as a ‘womb twin.’ He and Cardamom were conceived as twins but only Cinnamon survived,” Pastor Clyde said. “Even though people don’t believe that children have memories of the womb, they do.” The three adults talked a long time, and Mama and Papa felt much better when they went home.

Cinnamon is a twin calf, and he is a survivor. He doesn’t understand his feelings, but wise Mr. Llama knows how to find the answer. Cinnamon finds others who are just like him through Mr. Llama’s special playgroup. Follow Cinnamon as he learns to let go of his brother and let God heal the hole in his heart.

Terrilyn Hergott, BA HIS/ENG, is a multiple survivor and the mother of two twin survivors. Using her talent for research and her gift of writing, Terrilyn Hergott has produced a book that is the first of its kind. She is pictured here with three of her five children.