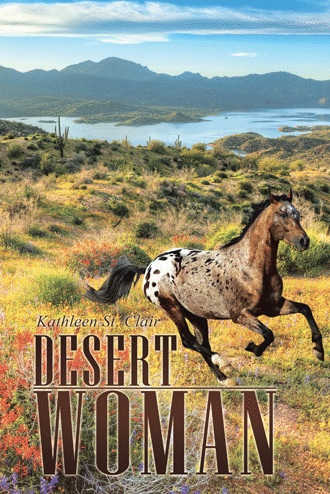 Mabel sat down in her wicker rocking chair and picked up her Bible. This too was part of her morning routine. As she read, today a passage from Proverbs, she heard the cooing of the mourning doves and the calling of quail down in the ridge. Somewhere in the shadow of the hills, a lone coyote yipped, and another answered farther away. Mabel loved these sounds of morning as much as the feel of the warm sun on her weathered skin. Suddenly she heard a voice. At first she thought it was Jake, her great-grandson, on his daily pilgrimage to check on her. But no, she didn’t hear Cochise, Jake’s horse. Besides, it was too early to expect a visit from Jake.
So what was that noise? Did she imagine it? It seemed to come in on the breeze, faintly, softly, but there was something disturbing about it. Mabel felt an odd sensation; a feeling that something was wrong, if not with her, then someone in her family. She then decided to do the only thing she knew she could do about it. She began to pray.

Janet and Kelsey lay on their stomachs on a huge rubber float that was tethered to the dock. The girls turned their attention to the darkening sky and the distant growl of thunder. “Bet it will rain tonight” Janet remarked.
“Huh, bet it’s gonna rain in an hour.” Kelsey replied. “Seems like it always rains when we go to the lake.” Janet was quiet for a moment. Then, “Kelsey, do you ever think about what happens when you die?”
Kelsey laughed. “Where’d that come from? What made you think about that?”
“Oh, I don’t know. I’ve just been thinking about that stuff since I came back from church camp.” Janet replied. After a pause, “Kelsey, have you found Jesus yet?”
Kelsey snorted. “Jesus? Why, is he missing?” Both girls laughed at the old joke, and Janet knew Kelsey was uncomfortable with the conversation and trying to lighten it. It bugged her that her friend didn’t really see the need to accept Christ into her life.
Within twenty minutes the rain came pelting down like cold, hard bullets. One by one, the families said their good nights, packed their cars, and left the lake.
The road that ran between Decatur and Cassopolis was a two-lane, winding road that Kelsey and Skyler always referred to as the “roller coaster road”, because of all the hills on it.
Patrick drove slowly on this night. The rain was heavy and at times the windshield wipers made no difference in the visibility. Patrick also knew that in the low areas, water often flooded the road, and it was too easy to lose control of your vehicle.
Kelsey began to be sleepy. The quiet drone of her parents’ voices, the clack of the windshield wipers, and the rain on the roof of the Ford Explorer created a warm comfort that enveloped her in its arms as she drifted off to sleep.
Patrick and Sondra were talking quietly as they came to the bottom of a hill, the tires swooshing through the water. Climbing the next hill, they could tell there was a car on the other side coming toward them. Suddenly they were blinded by the high beams of an oncoming Toyota pickup.
There was no time to think or react, no time even for fear. With an explosion of glass and metal, both vehicles slammed into each other. The Ford Explorer knocked the lighter vehicle over onto its side, skidding on the wet pavement. Then the Explorer spun crazily like a top before crashing into a tree and coming to rest there.
Kelsey awakened. In the darkness she heard the hissing of steam. She was aware of rain as it pelted down on her head. The windows were all shattered; she was covered in broken glass. A blinding pain in her head drove away all thoughts and blackness threatened to engulf her. From what seemed far away, she could hear Skyler crying, but from the other occupants in the car came only silence.

Eleven-year-old Kelsey Herring loved the stories her father always told; her favorite was a ghost story known as “The Desert Woman.” When life-changing events occurred, Kelsey and her brother Skyler found themselves moving from the forests and lakes of Michigan to the hot, arid, and rugged country of an Arizona cattle ranch. Here, Kelsey meets the Desert Woman she had always imagined in her father’s story. What she discovers is a truth she could never have gleaned from a mere story. What is the message to be learned from the true Desert Woman, and can the amazing things Kelsey learns from her help to heal a heart shattered by tragic events?

Kathleen St. Clair met her husband, Jeff, while pursuing a degree in fine arts from Western Michigan University. The couple moved to Arizona in 1987 and have raised three sons. Kathleen loves the outdoors and enjoys hiking, jogging, and riding her Appaloosa mare, Image.