Saved from Suicide by the Lord’s Prayer

A Memoir of My Extraordinary Encounters with Our Source 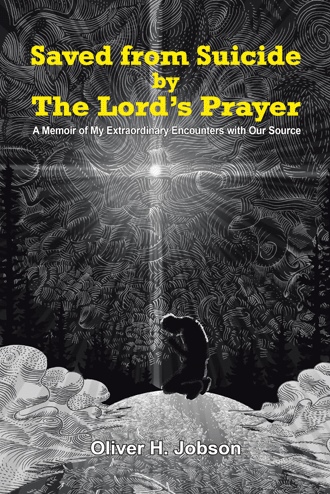 Meandering through a Maze of Confusion

I have always tried to live my life as a living prayer. I am not implying that I am a saint, far from it, but I have tried my best to live my life in such a manner that I can serve as an incentive for another to glorify God. I have done my utmost to live, not as a dogmatic, religious parrot repeating words and phrases from the Bible that I do not understand, but to live as a spiritual being.

I never have to convince or declare to anyone that I am a Christian, as to me, people who do that seem as if they have an ulterior motive, or are trying to prove to themselves that they are godly.

If you are sincere and honest you do not have to broadcast your affiliation, as your behavior and words will reflect who you are. The Light needs no justification as illumination radiates from all places and all situations, no matter now negative or evil the situation may be.

Many people have asked me what is the difference between Religion and Spirituality, as I am often saying that I am far from being religious, but I am spiritual.

To help others to know the difference, I have explained and coined a definition of the difference between the two words in the following manner:

Spirituality comes from within the memory and consciousness of the soul, which never dies. Spirituality is a natural feeling of well-being and a state of appreciation for all forms of life.

Religion is a dogma and ritual created and introduced by man for the spiritual discipline and the social well-being of mankind.

Spirituality is natural while Religion is social. Hence, spirituality originates from within our soul, religion was created by man and introduced to man for man's benefit.

I had every trust in the Lord Jesus Christ that the answers to all my prayers would be revealed from the mere fact that some time in the past at Sunday School I had experienced the Lord telling me that He was no longer on the cross. I was about ten-years-old, or close to that age, so as far as I was concerned, I had my first personal connection and experience with the Lord.

Momsie’s indefinite stay in the hospital to do a series of tests, proved a real interesting challenge. I made it a point of duty, borne from love, to visit her daily and spend a few hours chatting with her about issues, experiences, events, and family. What made this unique is that although we had spoken about these things over the years, the privilege of being able to bond with her in the hospital, drew us closer and increased the impact of our love for each other.

Over the three months she spent in the hospital, I slept in her room many nights; particularly when I sensed that she wanted me to stay with her. Our conversations were many and varied. We spent time talking about faith, religion, spirituality, life, and death. As her stay grew longer, she became weaker and weaker, and her vital signs dipped so low the doctor told me, on many occasions, to “bid her farewell.”

Although it started months before Momsie was admitted to hospital, my wife and I were having our issues. At the time, we had the most adorable children one could have. Our daughter was the older and the apple of my eye, and I took her everywhere with me.

It was as if she were my mascot, and all my staff treated her like a little princess. But that did not change the fact that my wife and I were just not seeing eye to eye. We were going through an emotionally rough patch and we both realized that it was just a matter of time before we parted.

I am convinced that some things in life are just meant to happen! I call it a happening! It is an act of fate, and nothing can be added to it nor taken from it. It is a quantum experience that is written in the blueprint of consciousness. To me, fate is the sum total of Karmic experiences that co-ordinate, harmonize, come together, or intersect, causing certain inevitable things to happen.

This happening may be negative or positive, depending on the way you perceive life. In my first book, I wrote a chapter on Karma to help those who do not know or understand about it.

The union between my first wife, the mother of my children, and me was a learning experience from which we both gained a lot physically, mentally, emotionally, socially, intellectually, and spiritually. The divorce proved to be a traumatic experience for our daughter, but not our son, as he was just a little baby, too young to have grown accustomed to having his dad around.

The amazing thing was that my wife and I never, ever quarreled; we never raised our voices at each other. But, subconsciously, we knew that the end of our marriage was drawing nigh.

It is surprising how life takes on a different tone when we live a spiritual life, putting into practice all the teachings we have learned over the years and still continue to learn. An interesting tenet of hers was that it took two to quarrel, so she never incited anger in me.

I learned to exercise discipline and self-control - it's called Yoga of the Mind and Spirit - which also includes the discipline of Love; unlike Hatha which "calms the mind's agitation temporarily, and may improve health and prolong life for a few more years." ~Sri Sathya Sai Baba.

It is so easy for the ego to take over and control the emotions. The ego never enjoys harmony and feeds on negative emotion, it is what is regarded as the devil. Therefore, a spiritual person also knows that the ego becomes the devil, if allowed to run wild. It is like having an untrained, viciously-cross dog on a leash, then letting it loose in a public place; it would just go wild, biting people and wantonly causing havoc.

In retrospect, the fact that the chapter on our marriage was coming to a close, coupled with many other painful experiences I was having, made me realize that there are no chances or coincidences in this life.

As is written and frequently repeated by others, everything happens for a reason; likewise, everything happens in Divine order, or by cosmic design. The answer to all synergistic experiences comes as a result of Karmic influences. This is why God never makes a mistake.

Many times, those Karmic debts date way back and are influenced by some action, or inaction, that may have originated many lifetimes ago. Whether you believe in reincarnation, or not, is immaterial. It is a natural, metaphysical, and cosmic law which transcends the dimensions.

The more I think about the mathematical disposition of Karma on a quantum level, the more often I marvel at the greatness and magnificence of this God. Just think. God is such a Creator, such a Physicist that this Karmic program has been set in motion to deal with any and every circumstance we may think of; whether it is verbal, physical, emotional or practical. Karma is seen throughout the universe of cause and effect.

Karma accounts for any action, tangible or intangible, that is taken by anyone, anywhere, in this or any dimension, and it will always have a consequential effect.

“Saved from Suicide by The Lord’s Prayer” Oliver H. Jobson's new book steps away from the confines of dogma and ritual. It displays the inspiration and guidance coming from a divine source that began from childhood. In this spiritual memoir he shares a few of his most extraordinary esoteric experiences that impacted and contributed to molding his Faith. The high points of Jobson’s book exemplifies the inspiration we receive when we are in tune with the higher octaves of guidance, developed through meditation. Raised in the Roman Catholic Religion, Oliver identifies his spiritual guidance as that coming from The Lord, Jesus Christ. Here is a story about a communication with the Celestial realms for those open to listening. A must read! Get your copies now at www.Amazon.com or at www.OliverJobson.com

Born in Jamaica in a Roman Catholic parents Oliver naturally became a mystic, spending much of his youth in exploring his "inner being". His discovery of scientific and metaphysical secrets in the Bible helped to mold his philosophy. Shortly after graduating high school in Jamaica, he attended the Royal Military Academy Sandhurst in England, and spent 11 years in the Army, retiring his Queen's Commission as a Captain and Battle Group Commander. He subsequently gained vast experience in his 20+ years in business internationally and finally left corporate life to write and concentrate on his natural gifts, particularly in counseling. The question of who we are is reflected throughout his writings, forcing readers to look within, through a process of introspection, creating a deeper understanding and sense of self as his stories reflect a harmony of communication with the Celestial realms for those open to listening.