Parlee and the Dragon Keys

Fantasy Adventure with a Twist of Faith 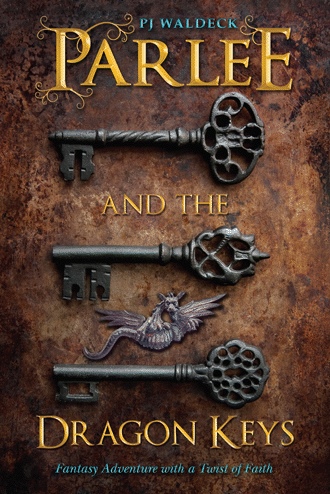 Before being betrayed and imprisoned, Parlee must find her way through sleepy villages, a guarded bridge, a mysterious cove and an enchanted forest on her way to Braunfield Castle. In her pocket she carries one of the three Dragon Keys which legend says holds the freedom of her world, and a scheming Generals power in check.
No truly noble quest would be complete without an entourage of diverse companions, and Parlee and the Dragon Keys provides them.
Miles: a humble donkey cart driver who offers Parlee a ride and has a familiar face that she can’t quite place. Through Parlee’s youthful eyes he seems old and worn, but in his case looks are deceiving.
Kig: a dashing swordsman, with questionable credentials, is Parlee’s soul-mate, but true love never follows a straight course which puts their devotion to one another to the test.
Smolder: a Moon Dragon who is eager to learn more about humans and quickly forms a bond with Parlee; but even this sweet-natured friend has an agenda of his own.
One of these three friends will betray her, one will deliver her to the enemy and the third will desert her for a pretty face. Knowing all this in advance will not help you to untangle the web of intrigue and plot deceptions that will lead you on an adventure with a twist of faith.

PJ Waldeck is the writer of numerous poems, short stories, and children’s books. In her debut novel, Parlee and the Dragon Keys, she has created a central character who the author admits is far braver than she would ever dare to be. PJ was born and raised in Minnesota and currently lives in view of the mountains with husband Carl, son David, and a border terrier, Millie.