Prove You Are Alive 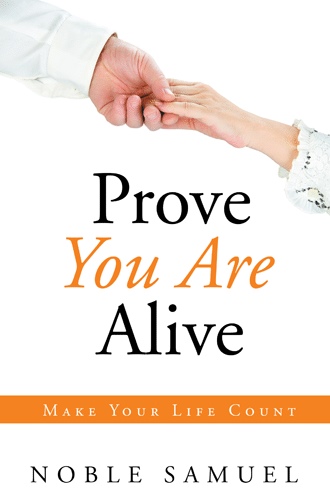 In the world we live in, we actually have billions of souls presently living on it and according to research through observations; only very few, I mean very few individuals out of the world’s population is fully considered to be walking on the path of greatness. The world’s population stands to be 6.94 billion people living on earth right now as estimated by the United States Census Bureau, well, the Almighty is not stingy on the act of giving offspring to couples, but the question now is, why do few people succeed greatly and while the majority just die in normality?

The world is just full of normal people, as few great people make things happen creatively while the normal people are still the ones that pay for them in one way or the other, although that is not bad, but what is bad is that, we have many people doing the paying rather than the giving. These few great people are the ones we always regarded as the champions of any passing generation. These people’s names usually tickle our ears whenever we hear them, and it is interesting that, the next generations keep trying to follow their footsteps, why? That is because; people usually use great people as role models and not failures.

Now, let me ask you. Why should people be sitting at the comfort-zone of life? In case you don’t know, people in the comfort-zone usually do not want to grow much in life. They usually lack the passion to live a memorable life. They love thinking low, as they usually believe that, creative thinking will make them sick. These people at the comfort-zone are also peaceful with life, they are just never too bothered, either what life is offering them as fulfillments will last into generations or not, and also, the need of these normal people are parallel to their families’ needs, and failing to realize that, fulfillment in life is far more than providing for the needs of one’s family, and that is why many die without any single honor from the people of the world.

It’s really sad seeing many souls returning back to the Creator and all they could say to Him are the millions of excuses why didn’t make great proofs in life, and at such stage, it must have been really too late to make things right for anyone, and one of the reasons for such awful failure is as a result of the passive lifestyles embraced by many people, which have been eating up the beauty of their precious destines. The phony-ease in littleness make many to see failure as success, and then, they believe that life doesn’t worth the fight, and so, they die, losing the battle, and failing to make great proofs that will make God to be of proud them.

It is not cheating at all, if one creative individual among the billions of people we have on earth is maximizing his own destiny. Anyone making the best use of his own life in order to remain in the memories of the world is not cheating on anyone; such individual is only prudent enough to make great-and-good proof before his life ends on earth for the benefits of mankind, and that is what this book is aimed to help you to achieve.

If you also look into history, you will realize that, there were billions of people which we cannot trace their profiles, whom also lived in the same generations with these great people: Michael Faraday, George Eastman, Rudolph Diesel, William Dickson, Karl Benz, Albert Einstein, Thomas Edison, Soichiro Honda, Elias Howe, Les Paul, Adolph Sax, James Watt, and also in the generation of these great brothers, Orville and Wilbur Wright. The great question is: Will you be remembered after you are gone? It’s all your choice!

But above all principles, facts and philosophies expressed in this book, there must be a strong desire to become great and useful to the world from within you, otherwise, all efforts would be wasted, and that is not good at all. Well, in case you don’t know, the very first difference between a man that is precious in the eyes and ears of the people of the world and a man who is not is their desires for what they are living for. One is creatively chasing greatness, and the other is serious chasing littleness.

So, desire or choice of how you want your life to end is very important, and that must be decided on time before you get too old to run the race of your destiny. Here is a question to think about: How can you do much more in life, without the desire to do much more? That question seems to be a paradox, but the very fact to be pointed out is that, if there is no high willingness to become great, it would really become very hard to make a good proof that will bring rest-and-comfort to your posterity, and so, you are out of the list-of-greatness.

The pathetic questions are these: “Why do many die without attaining greatness?” “Is the Almighty not merciful to all humans?” “Or, is it just all right to be ordinary in life?” It is not just good enough seeing many people passing away and without them fulfilling their destinies to higher levels before dying. It really hurts me as many people take failure as success, and that is why the next generations will not bother to ask or talk about them, as they usually fail to maximize their destinies, and not only that, they also fail to achieve the glory apportioned to them by the God during Creation.

Also, right in this great book, you will see amazing principles that are tapped from God’s Table that will greatly help you to re-shape your destiny, and these principles will really work only when you support them with actions. So be fully ready to take as much of the inspiring-doses you will find useful in this great book, and then use them to stay-ahead, so that, you will make good-and-great proof before leaving this world, making your family to be proud of you, and above all, becoming great as the God expects you to be.

Prove You Are Alive is an excellent book. The truth remains that it has the ability to edify you. It will not just edify you, but it has great facts that are meant to help you refine your lifestyle, making you to see yourself the way God sees you, helping you to have full control of your destiny so that you can start living an excellent life.

This book will help you to progress. God helped me to write it. I am blessed by the principles expounded in it, so I believe you also will be blessed.

I will urge you to read the book with an open mind. Try also to make all the necessary changes so that you can block all the negative habits and people as these will not help you live a good life as God wants you to live it.

Once again, this book will inspire you greatly. I am happy that it tells you how precious God is in our lives, and I am also happy it tells you the importance of finding purpose. Finally, it helps you to refine your attitude toward making a better testament in life.

Noble Samuel Gbenga is a man-of-letters. His writing abilities take different routes, and that makes him to be dynamic. So, he is an edifying author and screen-writer, and a film director. He is passionate about helping many people to achieve greatness. He is so enraptured by the nugget of not wasting the single and un-repeated life given to every human passing on the surface of the earth, and that is the major reason why he keeps echoing the need for attaining greatness for the benefits of mankind, and to the glory of the Master of Creation before one gets too old to play the game-of-life in an excellent mode.

He is not just a writer, but he is a profound writer that can boost anyone creatively, morally, intellectually and spiritually. So, in each book by the author, you will find facts that will help you to maintain good characters, also you see reasons to become useful to the world, and for the spiritually factor, you will feel the necessities why you need to live with Christ after leaving this world.

The author is also prudent. He hosts radio talk show and also presents a motivational program on air. He is the President of Noble Chamber, an organization that trains people for greater outputs in life. He is also the CEO of Noble Inc., a multi-purpose venture that is into multiple investments, and also, he runs Noble Hands, charity organization that helps to make the less privilege to have better hope in life.