The TRUE Identities of Depression

Volume. 1 What Depression IS, How IT Works, and How to OVERCOME IT 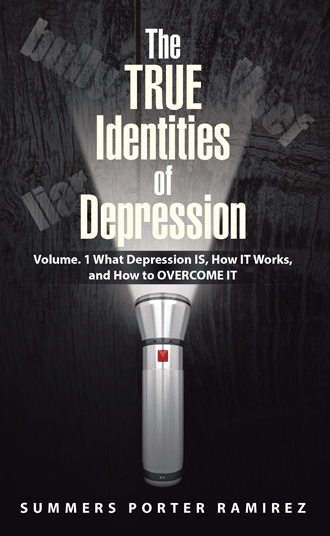 Depression LIIES, LIIIES, and LIIIIES some more!!
Depression tells the same LIES to EVERYBODY!
Neglected, Abandoned, Abused, or Rejected?
Depression has told you these Lies...
No one Loves You
You are not Good Enough
Your Unwanted
God doesn't love you, because if He did, He wouldn't have allowed this to happen to you.
That is not True!!
The TRUTH is, they are Negative Circumstances that has happened to you, by someone who has very Deep Issues, and Depression has caused them to take their Anger out on you.
It has nothing to do with you or WHO,YOU, ARE!!
But!! Depression will have you to BELIEVE that it is!
By Preying on the FEELINGS you have developed towards your circumstance.
Feelings, based off of the LIES that Depression told you!

This book will open your eyes to the truth about depression. You will begin to understand how depression has manipulated you and held you back in life. You will learn how to start defeating and conquering depression and begin living the life that God has in purpose for you!

Summers Porter Ramirez suffered from depression from the age of three, until she overcame and conquered it at age thirty-one.

She said she wrote this book because, “You need to know the truth about depression!”

“The truth,” she says, “is how you will learn to overcome it!”

She is a straight-to-the-point kind of person and did not want to use any fancy words or try to sound sophisticated, because she wants to make sure everybody has a clear understanding of what she is teaching. She looks forward to helping you overcome and conquer depression and
get your mind right.