Everything I Know about Evangelism, I learned at a Coffee House 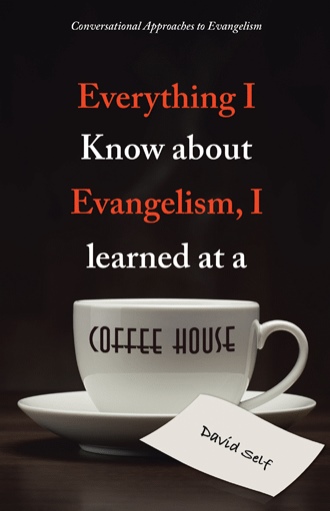 After exiting the bus at 3rd Street, I noticed Walnut Street Baptist Church towering over the streets of the inner city. On a typical Sunday morning, I would be well dressed, accompanied by friends, and offered a doughnut and a hot cup of coffee.

Walnut Street Baptist was an old “first church” that stood in stark contrast to the world around it. The large stained glass windows and beautiful dark wood adorned the sanctuary. On Sunday mornings, televised worship services drew the attention of the city of Louisville. The church had two senior adult high rises to meet the needs of the aging congregation. Yet the neighborhood around the church was living in the decadence of poverty and crime.

The sun was setting and it was already below freezing. The Kentucky wind blew constantly and the warmth of Walnut Street Baptist was unavailable. The bitter cold created both pain and numbness. Shelter became a top priority.

A hardware store seemed a great place to get out of the weather. A moment later, an employee urged me to leave. Apparently, they did not want a homeless man in a greasy brown jacket seeking warmth in their establishment. Therefore, I left and found a grocery store and walked around for a while without buying anything. It would be a short time before someone realized that I was not a shopper, so it seemed like a good idea to walk to a fast food restaurant and buy a cup of hot coffee. It was important to drink it slowly because an empty cup meant that it would be time to walk the streets again.

A few hours later, the need for a restroom was overwhelming, so I sought a place to eat that had facilities. The nearest place was a coffee house called the Dizzy Wiz. I recall laughing at the name because of my urgent need for a restroom.

The restaurant was tiny and anything but clean. The restroom was about the size of a broom closet and the sink needed replacing. When I looked at the menu, the only item that was affordable was a bowl of chili. It was delicious. Of all the things that I held in great value, nothing seemed as precious as the hot meal in front of me.

No one paid attention to the roach crawling up the wall in the kitchen. I suppose they thought it meant that the food was desirable to everyone. The server who took my order came to my small table, dumped all her tips, and stood next to me counting her money while I ate. It felt a little intrusive given the tabletop was only 3 feet by 3 feet.

The only redeeming quality about that diner was the fact that everyone in the room knew one another. They called each other by their first name and asked about their friends and families. Suddenly, the whole experience began to feel more like a church social.

Ironically, the Dizzy Wiz was across the street from Walnut Street Baptist. I asked myself, “Why does the church not come here?” I realized that these people, as common as they were, loved one another. It is unlikely that they would want the church to disturb them or make them a special project. Unless Christians would truly love them, the Dizzy Wiz patrons would probably not want believers involved in their world.

Reverend Self sat quietly in a corner booth at a local coffee house. His attempt to remain unnoticed would ultimately be in vain, as God had other plans. Join David Self as he explores the world of authentic evangelism in a very unlikely place.

David Self has held pastorates in churches in Gracey, Kentucky and Macon, Georgia. He holds a Bachelors from Mercer University and a Master of Divinity from Southern Baptist Theological Seminary. Self spent seven years as a self-appointed chaplain at a local coffee house. For the last fifteen years he served as an associational missionary for the Washington Baptist Association. His current ministries include church development, Baptist Disaster Relief, prison work, youth camps, and coffee house discipleship.

Everything I Know about Evangelism, I Learned at a Coffee House is an adventure into the world of authentic evangelism. The outreach methods used here will take one beyond traditional evangelistic approaches and unleash the power of the gospel in a bold way.

David Self resides in Milledgeville, GA. He is married to the former Kathryn Kelly of Macon, Georgia. They have two children.