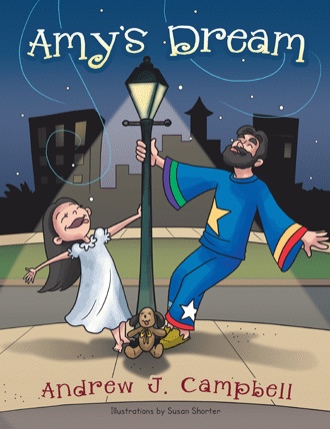 Another monster came running down the street. It looked like a big spider with lots of eyes and teeth. It was running very fast and was coming to get Amy. Just before it got to her it jumped at her, she threw sand on it, and it changed into a cute little puppy and landed in her arms.
"Wow, this is lots of fun!" Amy was so excited. Not even monsters dared mess with her now.
All of the sudden the ground began to shake and up out of it climbed the biggest monster Amy had ever seen. It reached all the way up to the sky. In fact, it took hold of the sun and turned it around so that it was now the moon. It was nighttime once again. Amy looked around and became frightened as the scary darkness replaced the day.
Amy jumped behind the Sandman. Only he could beat such a monster.
"Give me the sandbag Amy", said the Sandman.
Gladly she gave it to him.
The Sandman poured sand into his hand and threw it into the sky. The sand became beautiful twinkling stars.
Amy was amazed at the sparkling sky; it almost made her forget about the monster.
"I made the day and the night Amy. Nighttime is just as beautiful as daytime. There is no need to be afraid.

Amy’s Dream is a story about a little girl who has scary dreams. With her dad’s help she meets a powerful helper and learns she can make her dreams a wonderful place. She also comes to understand that God loves her very much.

Andrew J. Campbell is a man of God, oldest brother, and uncle. Helping brothers, sisters, nieces, and nephews understand God through stories is a duty and blessing that the Lord has given him.

He lives in Chesapeake, Virginia with his wife Julie and two new black lab puppies, Skeeter and Shadow.