Crumbs from a Bum

Exploring the Intellectually Stagnant Impulses of an Inattentive Age 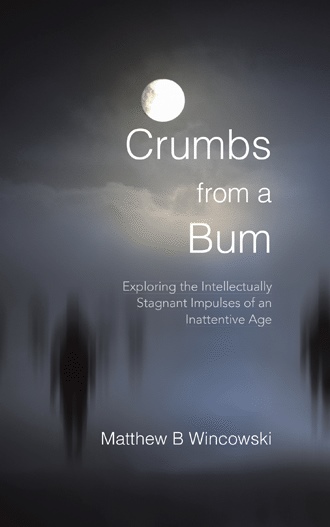 The comical thing about modern explanations of life is that moderns fail to explain anything in their explanations. Everything is left unexplained, even after they have supposedly explained everything. It's quite comical, really. The only thing their explanations explain is that they've failed to explain the explainable, and so everything they have said is merely words bouncing against words, connecting nothing and missing everything.
It is almost comical (but more so exceedingly pitiable and irksome) that dandyism is esteemed more fervidly than truth in our culture. If there is something comical about this (which I am not sure there is), it is that the truth about dandyism is that it is solely concerned with impressing highly impressionable people with an impressive outfit, and if it takes an impressive outfit to impress others, one might want to press and probe more pressing and probing issues in life.
The evasion of truth is the result of man's unwillingness to have a mind that behaves appropriately. To sidestep truth is not only to pass through life itself laxly and vaingloriously, but also to follow falsehood to where it has always led: willful blindness.
It is not uncommon to hear moderns proclaiming that philosophy is unimportant. They routinely and confidently deem philosophy trivial, wholly unaware of the hole in their statement: they are affirming the very thing they are denying. Put simply, to reject philosophy is to accept philosophy, to assail philosophy is to endorse it. To say that philosophy is useless is to use philosophy in order to argue against it.
If there is one thing a man ought to know, it is his own beliefs. Yet this is precisely the one thing moderns do not know, and, in most cases, do not even care to know. How is it that the majority of moderns can know staggering amounts of useless information, yet they do not bother about their own beliefs? A man who doesn't know what he believes is as absurd as a man not knowing his own nose. And of course a man who doesn't know what he believes is a man who will blow in all kinds of directions, just as a man who doesn't know his own nose is a man who will blow it for no apparent reason at all.

Finding a coherent set of answers to life’s age-old questions can be an onerous undertaking. Yet the questions abound in our culture, and a rational collection of answers is seemingly ungraspable. Commoners have been led to believe that beliefs are irreversibly inconsequential. Youngsters are boldly instructed to merely seek success. Teachers unblushingly preach to students that there is no such thing as truth. With uncountable opinions and beliefs put forth, who ought we to trust? Should we give credence to the preachy words of secularists who do not even have the backbone to adhere to a logically consistent worldview? Are we to trust the pop psychologists who unmindfully and unabashedly bypass life’s essential questions? Would it be shrewd of us to subscribe to the pluralists who lack the decency to study incommensurable worldviews, yet absurdly accept contrasting worldviews as equally valid? Whom shall we trust? In a culture where common sense has commonly vanished amongst commoners, we would do well to welcome common sense into our lives. Thinking episodically has become the modern routine, and yet, such a routine suffocates us in the ruins of our own lack of thinking, for thinking episodically is really no way of thinking at all. Perhaps, just perhaps, the answers to life’s most pressing questions are within our reach, but first we must be willing to embrace common sense.

Matt Wincowski is a reluctant landscaper who prefers to landscape his thoughts rather than land. A self-proclaimed bum, Matt seeks coherent answers, not money. He spends his time reading books on apologetics, polemics, and logic. Matt lives with his beautiful wife in Nyack, New York.