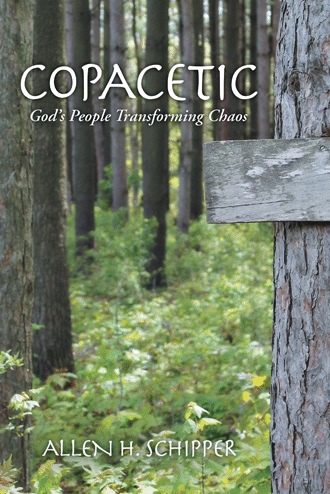 In my rounds as hospital chaplain, I once encountered a man who was in a very white-water place. The physical healing he so much wanted and needed had been delayed. Following his lead, I chatted with him about everyday things like fashion sense, kids in school, and sports, plus a few sidebars about politics and such. As I turned to leave shortly before his discharge, he stopped me. With tears in his eyes he thanked me for the stuff I had not said.

“I’m not religious,” he said, “but I’m scared. You didn’t give me any clichés, pat answers, or sermons.” We laughed, and the laughter segued into a dialogue that probed profound mystery wrapped in human degeneracy and human majesty. There was even some resolution that could only be described as shalom.

I’m still not exactly sure what happened. The outcome could easily have been radically different, turning on the flimsiest of choices. I could have moved earlier to the door, or he could have remained silent, merely basking in the warmth of human contact in a cold place. Instead, he chose to speak. I chose to stay. And something wonderful happened in the midst of some very difficult white water.

I’ve heard similar stories all my professional life. The stories contain so much power that when people tell them you can see their emotions smoldering just beneath the surface. They almost whisper, knowing that somehow they have stepped beyond their norm and experienced something amazing and sacred.

These occurrences are mysterious, and they are universal. When you strip any human being of all his facades and protections, what he’s seeking is solace—a moment of calm in his personal white water. That white water may be a shattering, life-changing event, or it might only be a day-altering stubbed toe. Either way, moments of pain are filled with the potential to become profound.

Every human being on the face of the planet is hungry to give and to receive the moments of calm that lead to healing, humanity, and wholeness. My white-water guy found his calm in being honest about his faults—and then smiled as he realized that he was still worthy of love and respect. That moment was driven by hope. Hope is intense, as it simultaneously reveals faults and grace. King David survived his white water and eventually wrote about his hard-earned wisdom or, as he called it, his “still waters.”

When Jesus demonstrated white-water survival he took it to the next level. He shattered long-held delusions with a gut-wrenching reality balanced by outrageous grace. He acted intentionally, even when his best efforts failed. In the accounts of his journey, the business of ordinary life included moments of the extraordinary. If the wonders Jesus performed were only displays of his divinity, then Jesus was a show-off. But if his existence and work were truly the result of the divine becoming one with the human so that the human could share more abundantly in the divine, then we had better pay attention.

Our goal is to become white-water people who don’t preach clichés but who answer complexity with guidance, selecting wisely from the vast array of possible responses. That’s what Jesus did, and what Jesus did was copacetic.

In my mind, the word copacetic has become a metaphor for a state of being that is the opposite of chaos. Not spectacular fireworks, but a sigh of satisfaction from a soul filled with a sense of “rightness.” Being copacetic is not the same as being shallow or pie-in-the sky. It’s about finding wonder and holiness—some still water in the white water of life.

There’s a vagueness inherent in the word that honors both speaker and listener and makes it a useful tool in describing human interactions. I like that a lot. But if we want to nail the meaning down, maybe we can do it this way: when an everyday encounter become copacetic, it takes a leap beyond our normal experience. It’s as if we experience an injection of knowledge, wisdom, or insight—often with mind-boggling results.

In the midst of our white-water lives, the feeling of being copacetic touches us deeply. When we experience it, it sometimes takes our breath away. When we see the finite and the infinite in such close proximity, we want to join in the adventure and learn more. We are God’s people finding ways to connect. Sometimes we fail, but we decide to persevere anyway.

The first century was filled with folk of passion who heard God’s call and responded to the needs around them. In the twenty-first century the people of God are still being called to yoke up and make a difference.

Copacetic is a wonderful old word. However it can be much more than just a nostalgic smile.

Superficially, copacetic is characterized by a 1950s “mellow.” But when you look below the surface, copacetic is a potent dynamic. It challenges precise definition, though it’s closely related to the concept of shalom, which speaks to peace and completeness. Copacetic then becomes powerful without being glitzy or calling attention to itself. It’s subtle, but people appreciate it immensely, especially in the midst of chaos — and life is chaos all the time. Copacetic is much more than the sense that “everything will be OK.” It’s a deep, rich, joyful, wise response to difficult circumstances. When an everyday encounter become copacetic, it takes a leap beyond our normal experience. It’s as if we experience an injection of knowledge, wisdom, or insight — often with mind-boggling results.

Copacetic in action was modeled most dynamically when God became human. In our day, copacetic God-people almost always leave good things in their wake. This good stuff is rarely fireworks-spectacular; mostly it feels like warmth in a cold, dark place or like a sigh of relief in a storm or a salve on soul-wounds. Copacetic people have spunk and vigor, but they recognize when their faults need forgiveness. When they’re at their best, human beings are copacetic.

In this book, we’ll explore what copacetic means as it transforms chaos into an adventure.

Currently residing in Battle Creek, Michigan, with his wife, Al Schipper built his career on teaching and business, but chaplaincy put it all together. Raised in Chicago, he then found the country and now believes a chainsaw is spiritual. Three daughters and nine grandkids enhance a life he experiences as copacetic.