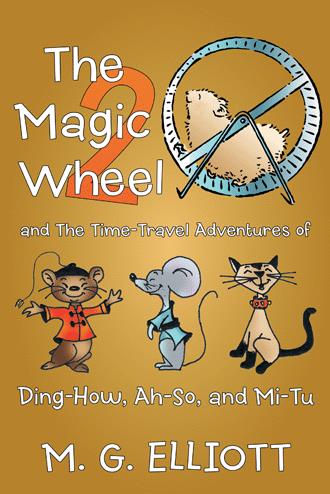 Ding-How and Ah-So hopped on the Magic Wheel and began to run as fast as they could. Mi-Tu held on tightly to the outside of the cage. The Magic Wheel slowly began to turn, gradually gaining speed with each turn. “Faster!” Ding-How urged. “We must run faster!” The two little friends strained with all their might to increase their speed. At last the Magic Wheel was spinning very fast. “Hold on tight, Mi-Tu!” Ding-How shouted. “Don’t let go!” By now the wheel was spinning wildly, and everything became a blur. There was a great rushing of air, and suddenly the Magic Wheel disappeared! What just happened? And where were Ding-How, Ah-So and Mi-Tu? 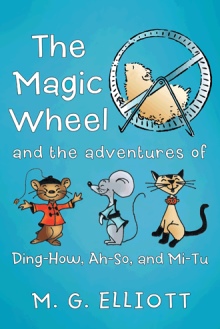 Have you ever wondered or fantasized about what your pets do when you’re away at school, or hanging out with your friends?

This book will give you a glimpse into their secret lives, and you will be amazed by what you learn about them!

Meet Ding-How, a very wise hamster; Ah-So, a mischievous little mouse; and Mi-Tu, a most dignified and brave Siamese cat. While their human children are away, this daring trio travel back in time on a Magic Wheel to faraway places. They share fantastic adventures filled with fun, danger and wonderful discoveries. Join them when they meet the little boy emperor of China. Follow them and the Minute Men in 1776. Meet Ah-So’s Japanese Samurai ancestor.

Stand in awe and wonderment with them at the open tomb as they learn the true story of Easter.

M.G. Elliott has been writing and drawing since early childhood. Winning a grand prize medal in a writing contest was the encouragement M.G. needed to continue writing.

Several years later, as a journalist, M.G. was feature editor of a daily English-language newspaper in Taipei, Taiwan, Republic of China. Other professional writing includes: ghostwriter for a well-known Academy Award-winning actress, public relations director for a Christian television service and publicist for a historical museum.

M.G. Elliott passed away in 2016 and resides with her heavenly Father.