The Wedding, the Wine, & the Water 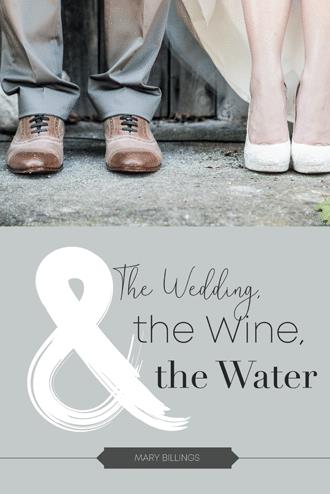 The Invitation and the Proposal

It is the beginning of every love story; boy meets girl, and girl notices boy. Shortly after meeting, words are exchanged alongside stolen side glances filled with lingering warmth. Under the shade of a fig tree, they meet and whisper the hopes for their future.

A meeting has been set up by boy, boy’s father and girl’s father. The men discuss the details of the match, including the bride price: the Mohar, and a marriage contract: the Ketubah. Next, the groom presents his offer to his future bride, he stands in front of her with an old table between them. Alone in the center is a single cup of wine. With his eyes, still on the girl he loves, the boy takes a drink from the cup of wine and offers it to her. Slowly, lowering her eyes as she reaches for the cup, she takes and drinks. Her acceptance comes without hesitation, yet with grace. His father pays the bride price immediately. The groom offers the bride a special gift, something he has carved from the wood of a fig tree. These layers of invitations endear her heart to his. They are now married and set apart for one another.

Immediately the groom departs to head back to his village to begin the work of preparing their home. During this time, the bride and groom exchange letters bridging the gap of separation.

After months of preparation and anticipation, she knows he will be arriving sometime soon. She listens and waits daily for a clue that he is on his way to bring her home. The time is drawing near, she senses it. Wearily waiting one evening, she hears a sound. In the light of the full moon the wind changes direction beaconing her to the bedroom window. She is sure she heard an echo of his voice. Leaning out of the window, she hears singing and the sound of feet running over the pathway leading to her home. Shouts of joy disrupt her patience and the love song surrounds her as she gathers her things with a trembling heart. Her mother and father stand at the bedroom door with quivering smiles that brim with pride. This choice of husband gladdens them. Nurturing whispers are hurried as mother reminds her to pack all her belongings. Watchful with admiration, younger sister gathers around as her mother ties the bridal dress into place and attaches the veil. Father looks on as tears of joy paint his face with tenderness.

With more shouts of jubilation, the groom pounds the front door, calling the bride to receive him. Parents open the door and a young man stands at the doorstep finishing his jubilant love song. Parents deliver the delicate hand of their daughter to his open ready hand. He lifts the veil from her beloved face to confirm that the young woman behind it is indeed his bride. He breaks forth a smile and places the veil over his bride with loving satisfaction. An intimate ceremony takes place immediately. It begins with another shared cup of wine. He hands her a copy of the Ketubah, blessings are spoken over the newlywed couple, and the groom places a ring upon the bride’s finger. Now they journey to their new home, a new beginning. Walking backwards with his eyes set on his beloved bride, he leads the way. He is overcome with love songs, the high notes share his promises to her, while the low notes tell of a yearning experienced throughout their separation. Her parents’ walking beside her, guiding her future by speaking words of wisdom and reciting psalms of encouragement. The couple arrives. The groom goes in ahead to briefly glance around, assured that all is as perfect as planned. Still singing, eyes set on his lovely bride, the groom leads her into their home for the first time.

They spend time having a savory meal while sharing another cup of wine. During this time, they get to know each other intimately. This is

the beginning of their private relationship as husband and wife, leading to a physical expression of their love for one another. Their marriage is now consummated, and they begin the journey of becoming one flesh. Let the celebration begin!

The Beginning of It All

Proposals, engagements, and weddings through time and culture are as diverse, yet similar as one’s taste in food, music or literature. If we strip away the culture and era, we are left with the basics; people love to eat, listen to music, and read.

Weddings contain many similar elements; a proposal, an engagement time, and a marriage ceremony or tradition. Further strip away traditions and span of time, you will find consistent elements tying together the entity of marriage with a thread connecting us in this possession of two people brought together into a new beginning called marriage.

The traditions of the Jewish wedding in this book lean towards ancient times, many still known, practiced and revered today. The study of these traditions has torn through the veil of my heart increasing thanksgiving, revealing the deep beauty found in marriage rendering my heart wide open with joy.

When a marriage was arranged in the early Jewish culture, it was set up significantly different from American culture. A single man and his father would travel to the prospective bride’s home to meet with her father to discuss the prospect of marriage. At this meeting, they discuss of the bride price: the Mohar, and the details of the marriage contract: the Ketubah. If both parties agree, the bride would be promised, engaged to the groom: the Erusin. Take a step in-time or move geographically, and the bride would be presented with this proposal and its terms. She could either accept or decline. If the invitation to marriage is accepted, the couple are engaged.

Wedding traditions can change dramatically from culture to culture, from place to place, and from time to time. Yet in the Bible we can discover both a symbolism and a prophetic line that can take us from Old Testament to New Testament—from ancient Jewish culture and traditions to the burgeoning good news of Christ’s gospel—and all of this can be found through the wedding ceremony and covenant.

The Wedding, the Wine, and the Water weaves together a tapestry of ancient Jewish wedding traditions and the gospel, exploring the symbolism of wine and water that God uses to reveal his plan to pursue us with a tenacious love through his Son, Jesus. Author Mary T. Billings explains how the tradition of the wine, ever present in the ancient traditions, is used to ceremonially invite and covenant the bride to the groom—something that is echoed in the New Testament gospel as Christ’s invitation to us, his bride.

While wedding traditions can change, God’s wedding covenant with his bride is immutable and forever. This is a love story that began before we were even born, and it is one that will last for eternity. By connecting the elements and symbols of this marriage from the Old Testament through to the New Testament, we can be drawn into a more intimate relationship with Christ.

Mary T. Billings is from California and lives with her husband Dana. Together they have raised four daughters. Mary is a former educator, women’s ministry leader, and Bible study teacher, and she is looking forward to what’s next as God reveals his plans in this new season. Mary loves to encourage women, believing women do not hear often enough that they are beautiful and have incredible hearts of service to their families, neighbors, and communities.