The Greatest Love Ever Shown

In the Father’s Hand: God’s Creation! Our World. 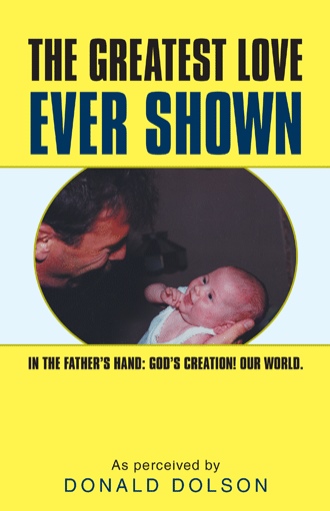 My reason for writing this book; is because so little gratitude for God is prevalent in our world today. Some people, even scientists claim we don’t need a Creator God, and don’t believe He even exists, and yet, everything we touch had to have a Creator, a planner and manufacturer. Even a grain of sand had to have a designer; scientists have estimated that it takes trillions of electrons to make one grain of sand. A Spirit created it and so Spirits hold everything together all the way from mountains to those grains of sand.

In Geneses, we are told that God is a powerful Holy Spirit hovering over a ball of water, and that He made our world from “Nought” we call it ‘space’, and by using simple logic and common sense with the findings already acknowledged we can make a sketch showing that God made everything by following a seamless sequence, first, God particles in His nought, they in turn were packed into tiny balls we call electrons which became major parts of atoms.

All are in motion, with electrons rotating two ways at once inside an atom, every time an additional electron is added a new element is created, even air is created from particles, and so the story goes. People who claim “We don’t need God,” we’ve got Nature, fail to realize that the Nature they depend on is proof of God’s existence, when you realize He is the source of Science, Geology, Psychology, Psychiatry, everything is included, One Source.

I have tried, by using my lifetime of a host of experiences, to weave everything together in a believable pattern through relating what I have learned from personal experiences, observations, hearing and reading of the inventions of others going back to the Greeks and even earlier. The opinions expressed and assumptions made are my own.

Much of what I’ve read talks as if God made our world and then left it in a running condition, nothing is mentioned of the fact that everything moving has to have a continuous means of propulsion, something has to keep the electrons and atoms spinning, which means God somehow made other heavenly bodies earlier, with the possibility that emanations from stars give the energy to maintain the rotation of electrons and atoms through a means I will try to explain later. How God Himself came into being and created ‘space’ as His raw material, and how and when “The Beginning” began will have to forever remain a mystery to humans, but God had to stay to keep our intricately complicated Universe operating, and so He is still with us. We see the proof every day, in ourselves and all the things around us.

Every ‘Theory’ is the result of an estimate, a guess as to what happened from observable actions, and mine is no different, except mine started after I prayed to God for wisdom over a long time, and I feel very unworthy in even trying to unravel a portion of the immense area we call Home, knowing how privileged we are to exist with all the other Heavenly bodies flying around at high speed, with collisions occurring repeatedly over the millenniums. In spite of all the miseries and disharmony around us, there is beauty to be found amid the pathos, for all who realize our world is a living entity in the cosmos, and we have the ability to improve whatever area we are in if we follow the directions we have been given by our loving Creator, God. I’ve surmised that the wide variety of experiences I’ve had over my lifetime were preparations to give me spiritual discernment, for without it, things of the Spirit can’t seem to exist, very little could have seemed sensible. I’ve been told I “think outside the box”. I find that is necessary, for conventional wisdom seems woefully in adequate to give God the praise and adoration that He is owed by His creation.

This is a collection of common sense realizations attempting to point out the many facets in humanity that are actually part of God’s one creation. The collection points out that to fully enjoy what God has made, we have to respect the boundaries He has given us in love for our benefit, and that the nature some people acknowledge is evidence of His loving care. We are all tiny parts of one magnificent creation, and as such, God hopes we will revel in the freedom He provides when we choose to follow Him and give Him all the devotion we can possibly muster. Music, art, science, sociology—all the terminology we can name has one source: God.

Donald Dolson was born in 1926, prior to the Great Depression of the 1930s. He was a third son, went to a one-room school, and learned farming. He had a curious mind, and was interested in things such as electronics and magnetism.

He went to work in Toronto, Ontario, in 1946, and had a very varied life with many experiences. He tried to write about them in order to share what he learned.