Avoiding Martyrdom: the Catholic Church in the United States 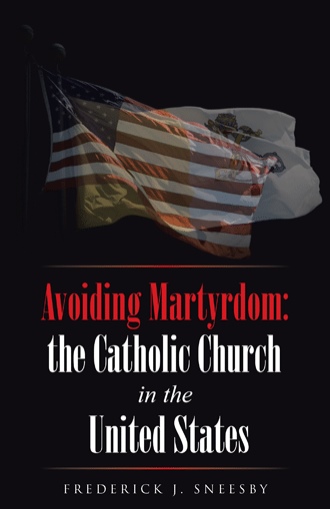 Chapter One Fifth Grade Martyrs in a Far-Away Church

We were ready to be killed for our Catholic faith. At least I was. I just assumed everyone else was too although I never asked them. I just assumed that any fifth grader worth his salt was willing to do whatever it took to defend the faith against the Communists. To others, eleven years old may seem young to contemplate martyrdom, but we in the fifth grade at St. Edward School had read many a biography of young saints: eleven, twelve and thirteen year olds who were called upon to give the ultimate testimony. Our age did not disqualify us. After all, we were spending this year preparing for Confirmation, one of the seven Catholic sacraments by which we would become “soldiers of Christ.” No one thought that too much was being expected of these kids. No. The religious sisters, the parish priests and our parents were deadly serious about our training for Christ’s army: warriors in the fight for God’s kingdom against evil. This training was two-pronged. First, there was memorization to be done. Seventy-seven questions and answers were printed on mimeo (there were no copy machines in those days, thanks be to God because we probably would’ve been assigned more questions) and distributed. We had to know them cold and we would be quizzed on them by one of the parish priests. I spent many evenings in the parlor with my parents going over and over the questions, questions about the nature of Confirmation, the gifts and fruits of the Holy Ghost (he or she was not yet known as the Holy Spirit), the ritual and symbols of the sacrament, and what we would be equipped to do by receiving this sacrament. The second part of the training was motivational. There were stories. Heroes and heroines. From the apostles, transformed by the Holy Ghost at the “first Confirmation” from cowards into witnesses who preached in the face of ridicule, torture and death, to St. Tarcisius who gave his life protecting the Eucharist, to the Crusaders who gave their all to fight against the unbelievers (this was before the age of ecumenism), to St. Maria Goretti who was brave enough to choose virtue instead of a life of sin, all the way to Bishop Walsh who was imprisoned and tortured by the Chinese Communists in our own lifetime. The stakes were high: their individual efforts had eternal significance. The success or failure of Christ’s mission depended on their courage. We were joining ranks with them by Confirmation, becoming Soldiers of Christ. I’m sure this rite of passage meant something in every day and age. But for us in 1962, being confirmed was especially impressive. We were in the teeth of the Cold War. The Communists had crushed freedom in Hungary, they beat us to outer space with Sputnik, our spies were shot down and on trial in Moscow, their leader was yelling in the United Nations that he would “bury” us, they were 90 miles away from our shores in Cuba, they had huge armies to accompany a doctrine of world domination, they were godless, and they had the atomic bomb.

We expected them to appear at our school at any minute. I am not exaggerating. In our grammar school years, air raids were commonplace. We would run in from playing in the street and lie down on the floor to practice for an atomic attack. We would rehearse crouching under our desks at school in case the attack came during school hours. Again and again, probable scenarios were described to us in which the Communists would come into our school with their weapons drawn. The nuns would, of course, be shot immediately. We would be rounded up, taken from our parents, and brought to camps to be brainwashed in Communist doctrine.

Our immediate goal was to elude the enemy and make our way over to the church where we were to go to the tabernacle and consume the Blessed Sacrament before the Communists could desecrate it. Beyond that, we were to resist any ideological bullying by the Reds and boldly announce our faith and our intention to keep that faith even if it meant our deaths, which we knew it would.

The weak, and we suspected there were weak fifth-graders (probably the ones who did not know all seventy-seven answers), would give in to the first hint of torture and renounce the faith, saying right away that they were not Catholics.

The Communists never came. We were confirmed, promoted to the sixth grade, the clock of history struck 1963, and the maelstrom of cultural change that was the 1960’s began to swirl uncontrollably. By 1973, our society and our Church would be completely different. The world of 1973 was radically altered from the world of 1963. It was not just a matter of fast-paced technological changes as we are experiencing today that, in turn, affect the culture. Fundamental change occurred. Generations no longer related to each other in the same way. Gender roles and relationships were fundamentally questioned. The status of governments and institutions was reduced. Authority in general didn’t, well, hold any authority. Truth and beauty and goodness became relative terms. Family structures were re-defined. A decade begun in idealism and optimism ended in materialism and cynicism.

Almost six decades later, the memories of that era’s Catholic Church in America seem very far away indeed, as does the society as a whole of the 1950’s and ‘60’s. The reality of the time is well-revised in the remembering and there are tendencies to be nostalgic or to look back with some wistfulness. The fact is that they really were not the greatest of times. The rigidity of class and race and gender seem unbearable to 21st century eyes. The discrepancies between the values people proclaimed and the ones they actually lived reveal a fragility about the prevailing culture that makes the chaos and breakdown of the ensuing years understandable.

Ought we go back to that time? No, we shouldn’t and we can’t. The virtues of that time period are far outweighed by the defects. But virtues there were. If we were to reach back into that era of the Church marked by insular thinking, we would find some things of value, traits of the Church that were lost during the closing years of the 20th century.

My comrades and I, the fifth-grade confirmees, were engaged in the struggle of good against evil. How welcome would it be for us living in the beginning of the 21st century to have moral, political, spiritual, and economic battle lines so clearly and neatly drawn! In the present time, we trip over the definitions of “good” and “evil.” It is hard to find agreement on what is of value, and labeling anything as “evil” is pretty much left up to the individual. It is very rare, except for the occasional epic movie like the “Star Wars” series or the more recent “Narnia” films, that we can identify the “good guys” and the “bad guys.”

This murkiness about what is right and what is wrong may have started to be stirred up in the Korean War when, in contrast to the Second World War, the purpose of expending the lives of so many was unclear, an uncertainty that was taken up anew further south and further down the timeline in Vietnam. It wasn’t that the war in Southeast Asia wrought any more destruction than WW II; it was just that we couldn’t seem to justify it.

The disordered condition in which the United States finds itself with materialism that dominates our culture, a landscape of relational life that has become a wasteland, destructive violence, crippling skepticism, blindness to the value of human life, and a scandalous gulf between rich and poor cannot be healed and redeemed unless there is a community of believers willing to invest the goodness and virtue that is needed to bring about what God intends. The country needs a vibrant Catholic Church.

How can the United States Catholic Church be that church? Avoiding Martyrdom examines the state of the American Catholic Church and the disquiet felt by many Catholics, while looking toward how Catholics might fulfill the church’s mission in the years ahead.

Frederick J. Sneesby received a Masters Degree in Religious Studies from the Katholieke Universiteit Leuven in Belgium and served as a parish priest for ten years before marrying and starting a new professional life. Fred and his family make their home in Rhode Island where he has worked in human services for a number of years and written about faith and culture. Fred Sneesby is also the author of A Believer’s Christmas. He can be contacted at fredsneesby@verizon.net.