Laughter on My Path

An Educator's Funny and Compelling Encounters with People, Problems, and Pets 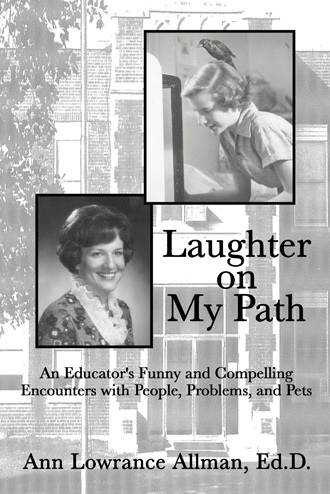 PART I 1 Hanging from the Family Tree 2 The Prudes in Sin City 3 Dancing to Puberty’s Tune and So Many Horns to Honk 4 Christian College and the Cavalcade of Characters 5 Horseplay on the Road to Academia 6 I Should Have Known Better 7 Standing on the Toilet and Other Escapades 8 Studying to Do What? 9 My Nose in Your Business Again PART II 10 He Should Have Gotten a Trophy 11 Moving to Argentina or Honk if You’re a Terrorist 12 Dropping the Ball 13 You Want to Bring That into This Country? 14 Would You Like a Chew after We Kiss? and Other Stories 15 We Knew You Weren’t from Here 16 Don’t Quit Now PART III 17 MSSC and Return to Learn or Some Swore They Were Brain Dead 18 The White-Haired Idiot 19 Nothing in My Contract Said I Had to…………… 20 Frightening the Natives and Other Creatures 21 French-Kissing in the Nursing Home, Shucking Body Parts, and More Pets 22 She Smells Like Mothballs 23 Fire and Ice 24 Who Will Carry the Torch and Not Set the Place on Fire? Chapter 1 HANGING FROM THE FAMILY TREE My mother acted like she had a Master’s degree in methods for outsmarting God and first graders, in spite of what her diploma said. Father had a Ph.D. in something between biology and medicine, and toyed with cadavers, embryos, and skeletons. Whatever was to become of me, I figured I could blame on the family genes. Years later my colleagues said all this explained a lot of things, especially after I told them I played with bugs and rodents when I was a child. I meandered through grade school in the forties and junior high in the early fifties thinking I might become a nurse like all the other girls my age did. By the time I graduated from high school, I was still the Queen of Indecision. I had experienced an illustrious musical career for a teenager, but didn’t want a life of married clarinet players asking me for dates on the road. My senior year I had been all-too-moved at church camp to pledge my life to full time Christian service and join missionary forces. I loved the Lord; however, at seventeen, I was having a hard time dealing with distorted thoughts of fleas in my cot and aborigines with bones through their noses hovering over me. An affordable religious education school was nowhere in sight anyway. Halfway domesticated, I figured a home economics major could at least show me how to spin, weave and make butter. I could teach students how to make pajamas without sewing the legs together like I did once in tenth grade. But when I found out how much chemistry I would have to take, I counted my chemistry scars and threw that out. I sped off to junior college full of my mother Elizabeth’s admonitions that a girl without a college education would never amount to anything. Was I destined to becoming a teacher like my parents? As entertaining as they were, I had experienced enough of Mother’s first grade stories. When someone cheated at the blackboard, she claimed Blackboard Disease was spreading. If she couldn’t catch a boy copying off a girl beside him, she waited until he also copied her name. If someone missed the toilet in her bathroom and the next guy didn’t report it, that next guy had to clean it up. On the other hand, was I to be like my father Edward, finishing off students in medical school? He had already told me how to hang a cadaver using ice tongs in his ears so he could be lowered into a vat of formaldehyde. I pored over medical student yearbooks, one shamelessly sporting a picture of a dirigible-size tank labeled “Twenty-Four Hour Urine Sample.” I had studied Father’s two-headed pig embryo in a jar and a baby that was supposed to be twins in another one. It had three eyes, half a brain, and six fingers and toes on each extremity. I had listened to Father’s story about being the last person in the department to get a leg found in a sewer so he could help identify it by measuring the bones. At least I decided I was not going to be one of his students and become a nurse. No way was I was going to do guts, blood, bones, or pus. I did read a whole book on obstetrics for nurses some years later so I could shuck out my babies like peas. Perhaps Mother thought she could inspire me into a career choice by relentlessly trying to get me interested in my heritage. She had already stomped through endless cemeteries wearing her rain boots, taking pictures of tombstones speckled with bird droppings and dead grass blades so she could tell stories about the people lying under them. Among all of her minister, doctor, and musical relatives, she was proud that she had found at least one horse thief, but was incensed when someone tried to convince her that Napoleon was part of our family tree. I wasn’t quite sure where all this was going, but something told me I should pay attention in case there was a genetic or environmental trap hiding somewhere. Part of my problem with career indecision was that I was also a victim of too much family versatility, in that there wasn’t much my parents were afraid to tackle. In addition to their careers, between the two of them they could play musical instruments, draw, sew, write scientific papers, speak a foreign language, do carpentry work with impeccable precision, identify animals and insects that bit people and each other, collect weird specimens and remember all their names, think of pranks to pull on the neighbors, raise vegetables and chickens, fix machinery without leaving out some of the parts, and work algebraic equations with two unknowns. Amidst all that, my visions of a career path were still dim and I was looking for focus.

Laughter on My Path is the memoir of a medical school professor’s fun-loving, pet-collecting, musical daughter. She wanted a more normal life and career apart from studying human brains on the kitchen table, being introduced to cadavers, and facing puberty with Gray’s Anatomy. Still terribly naïve, she married the wrong man, who later became her brother-in-law and their boys’ “Uncle Dad.” As Ann Hamilton in this first marriage, she began teaching Spanish. When she became Joplin High School’s dean of girls, she realized she must be both administrator and counselor to solve students’ problems. Later, she married Joplin’s entertaining school superintendent, Dr. Jack Allman. Soon they served as educators in Buenos Aires, where she made colorful mistakes using Mexican Spanish. Then they re-entered the States to stir up three more school systems.

Dr. Allman taught in three Missouri high schools. She was dean of girls at Joplin High School/Parkwood, Columbia College’s assistant to the dean of students, and assistant principal at Neosho High School. She was director of guidance at the American School in Buenos Aires and counselor at MSSC (now MSSU). “Ann Allman has given us a host of hilarious vignettes of her life. You’ll marvel at how she solves problems without conflict and may vow to steal some of her solutions.” —Jo Pearcy, author of Secrets and Secrets Sealed: A Sequel to “Secrets” “Rarely does a memoir have the humor and verve of this one. She is a true educator and has lived a remarkable life. We are privileged to share it.” —Robin D. Montz, 1987 Missouri State Teacher of the Year “Ann relates some of her and others’ most amusing and embarrassing moments and tells how she handled difficult situations and helped find remedies.” —Charles Nodler, archivist, MSSU George Spiva Library and author of Bracing the Cornerpost