The Blood of a God

The Nephilim Chronicles, Book One 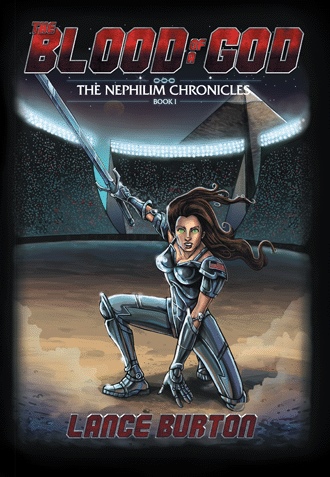 As I got older my training got harder and the taint began to show itself more and more. It was scary. Both to myself and to others. Everyone knew me as the beautiful super-sweet athlete and scholar (I actually never liked it put that way) who you simply didn’t cross. The only one who seemed to be able to understand me and not be afraid was dad. For years though I thought for sure the flashes of inner rage would eventually consume me. I don’t know, maybe it did.

On the other hand, it sure was useful now. Sure, it still makes my relationships a little tentative, but when you are surrounded by bad guys it definitely comes in handy. Makes you extra fast and extra strong. And, it makes you deadly.

But, like my dad always taught me, being deadly really is only in small part about your physical self. Your strength, your speed, your technique, your skill. All those things are part of the makeup of a warrior like me. But being deadly really isn’t about that when you strip it down to its core elements. In the end it really comes down to one thing: being deadly requires a deadly state of mind.

Some people have it and some people don’t. Actually, most don’t.

Dad called it fighting spirit and taught me how to tap into it and later, how to control it. I can still hear his voice as he would ever patiently teach and explain the deeper truths about life and the warrior code. Honor, compassion, justice, mercy, and discipline. All vital elements if it happens to be you were born to battle against evil.

The effects of the taint didn’t end there. One time when dad had taken me up into the mountains for some survival training he and I were working on our bladed combat skills. We circled each other slowly, like a tiger ever so cautiously stalking its prey, waiting for the right moment to strike.

My breathing was heavy, but controlled. Consumed with the moment my senses peaked and it was as though I could hear the footsteps of an ant or feel the gentle tremor of an eagle landing in the trees high above. Dad shifted his stance slightly, putting his weight on his back foot, and allowed the tip of his blade to drop back just a little.

In an instant he feinted low with his lead hand while rushing in and leaping high above, hoping to strike with a single thrust to the chest or neck. A killing blow if we hadn’t been using the training weapons we always used.

But then I realized he hadn’t leaped at all. At least, not yet.

It was what the Metaphysical Sciences Department calls ‘a precognitive moment triggered by the onset of a heightened state of awareness’ or something else unnecessarily long and wordy. In much simpler terms it was this: I saw what he was going to do before he did it.

Now, unless you have been facing certain death and are moments away from losing your head to the razor sharp blade of a monstrous creature intent on killing you and your whole team it is difficult to explain just how useful such a talent can be. Trust me, it’s useful.

It doesn’t stop there. More and more talents manifested over the years: Telekinesis, full blown telepathy and empathic ability, resistance to disease or any kind of poison (that has been a real boon let me tell you), and a host of other ever useful things. Things that kept me alive more times than I can count. Things that saved my team over and over.

So, why am I telling you all this? After all these years, why write it all down now?

Simple: the final battle that will determine the fate of humanity and all of Earth looms ahead and only I and a handful of fellow warriors know it…we work from the shadows, always barely a step ahead of the law, and constantly at war with the forces of darkness. And, just in case I don’t make it out alive I wanted everyone to know what really happened. I want everyone to know the truth of just how close we came to losing everything.

The year is 2047 and the fate of the Earth hangs in the balance. Commander Tarakia Sol, a warrior-princess with the blood of a celestial coursing through her, leads a special team called Talon Squad in a fight to save humanity from a coming invasion by a race of beings in the Orion Constellation...beings who are the descendants of a former Angel and will stop at nothing to enslave all of humanity. Will all her power, training, and faith be enough to stop them? What does the revelation of their existence mean in relation to our place in the universe?

The answers are within...

Mr. Burton is a 1996 graduate of the US Naval Academy and former Surface Warfare Officer, Class Leader of BUD/S Class 239, Former Blackwater Security Specialist, and a Former FBI Counter-Terrorism Agent. Currently Mr. Burton is a team member with the Private Security company Spec Ops Service. He has also trained for almost 30 years in various martial arts with some of the greatest masters, coaches, and professional fighters in the world. His wife Dr. Stephanie Burton, M.D., is a former NFL Cheerleader and currently serves as a Medical Examiner for Dallas County. They live in Dallas along with their crazy White Shepherd Ghost and their little girl Jade who is already undergoing training to become a super hero...