The Operation of Faith in Ministry

A Manual for Street Evangelism 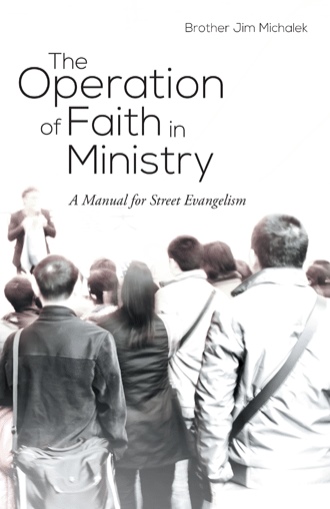 We live in a dark world since the plan of God for mankind had been hindered in the garden by our Arch Enemy, the Prince of Darkness. How clever the evil plan he had devised. Knowing the supernatural genius and knowledge available to the couple if they walked with God and obeyed Him, Lucifer had met a formidable foe in them and his demise was sure.

At their creation God had created them in His likeness and with His attributes.

They had the ability to know. They would know God. They would be able to know each other and understand the other creation. They would be able to plan and accomplish a task, filling the world with good. They had the ability to co-create life through the fruit of their love for one another. Surely if their kind multiplied as God had commanded them to, the earth would be filled with people who knew God, knew His love, and were instructed by God Himself in all matters of life and work. They would seldom tire of their efforts just as God only rested from his labors after creating the entire universe. Their tireless labors would work against the Foe and he would be overcome by the vitality and boundless energy of this new race of beings. Something had to be done and done quickly. They knew God and had the ability, power, and accurate perception of the angelic majesties in the heavens with the addition of a physical body to interact with the material realm. They saw everything as it really was and were given a capacity to learn. They had been endued with authority by God. They were created to rule. At first, over the fish of the sea, over the beasts of the field, and the birds of the air, over every living thing that moves on the earth. Could the next part of their dominion be over the Evil One and his minions? This must never be since he had selected himself for that position:

I will ascend to heaven;
I will raise my throne above the stars of God,
And I will sit on the mount of assembly
In the recesses of the north.
I will ascend above the heights of the clouds;
I will make myself like the Most High.’
Isaiah 14: 13, 14

They were created with this nearly unlimited capacity and they hadn’t even had the opportunity to partake of the fruit of the Tree of Life, God’s life, Zoë. They were created with the attributes of the angelic majesties with boundless energy. God had even commanded them to dress the garden, the land mass separating the Tigris from the Euphrates (modern Iraq) but by eating of this tree, they would become partakers of the very nature of God Himself. Hadn’t God pointed out all the trees to them? Wasn’t the Tree of Life among them?

Out of the ground the LORD God caused to grow every tree that is pleasing to the sight and good for food; the tree of life also in the midst of the garden, and the tree of the knowledge of good and evil. Then the LORD God took the man and put him into the Garden of Eden to cultivate it and keep it. 16The LORD God commanded the man, saying, “From any tree of the garden you may eat freely; 17but from the tree of the knowledge of good and evil you shall not eat, for in the day that you eat from it you will surely die.”
Genesis 2:9, 16, 17

What power and authority would the couple have if they partook of that tree and became like God Himself with Eternal Life, power and majesty? Wouldn’t they also have the infinite resources and light, guidance, power, and perspicacity with which they could conduct their affairs? The enemy must prevent this at all costs. However, didn’t the Lord mark the Tree of the Knowledge of Good and Evil as not to be eaten? What if the Enemy could deceive them? If they fell from their lofty place could the Enemy conquer them, then train them according to the precepts of his darkened kingdom? If he acted quickly before God could bring them light and understanding of the Kingdom of God, wouldn’t they become putty in his hand? Could they even be made to serve him in the war against God whose authority Lucifer so deeply hated? If he could separate them—

And so the cosmic battle for the minds and hearts of man began. Plunged into the abyss of nether darkness, they could not know God, experience His love or compassion because they would be dead. (Eph 2:1)

So the Enticer came to them and presented to them the Cosmic Question- Could it be that God was holding back something good from them? Shouldn’t they be free to make their own independent choices? Wouldn’t they therefore need the knowledge of good and evil to make those choices? Now Adam and his wife ate the fruit but neither of them expired, fell to the ground, or died. But they were surely dead that day, just as God had told them. But it was not a physical death where they drew their last breath. It was a death much deeper than that. Their spirit within them died and with it the ability to fellowship with God and know Him and receive His guidance. That died. Adam had been separated from his God and Creator. The light had gone out in the Garden on that day of infamy. The death worked instantly on his organ of communication with God and began to work on his physical body which would come to an end 930 years later.

Perhaps you have recently found Christ as your Savior and Lord and want to be able to convey your experience to your community or friends. The Operation of Faith will guide you through the necessaries and show you how the Lord enables you to effectively bring the gospel to the ones He has designated for your presentation. Brother Jim’s forty years of street and vocational evangelism experience will help you see how the Lord prepares you for the fruitful presentation of the gospel. Chapters that you will find helpful in initiating your personal outreach include:

Brother Jim received his B.S. from Rensselaer Polytechnic Institute in Troy, New York in 1968. He worked at Uniroyal footwear plant in Naugatuck, Connecticut, as an adhesives chemist, where he was converted to Christ on September 11, 1972. He began to witness for Christ within days of his dramatic conversion. The Lord has used our brother in street evangelism to lead many others to Christ and disciple some in street ministry throughout his forty-one years of knowing Him. He has pastored Rock Church of Fairfield, functioned as assistant pastor of Evangel Assembly of God in that town, conducted Bible studies for men in his home for four decades, and has led four men to Christ who currently pastor churches around the country. He is married to Tina Reynolds Michalek, who was numbered in the first waves of Loren Cunningham’s Youth with a Mission. They currently reside in their home in Fairfield, Connecticut.