From the Outhouse to the Penthouse

by B. Dean Brown 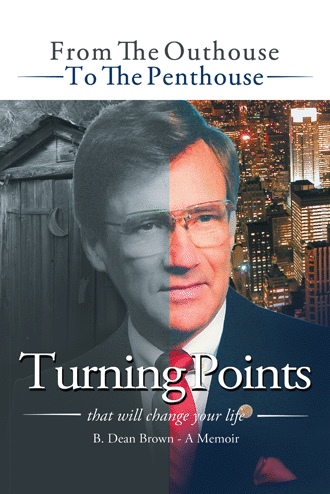 It was the year 1932, eggs were seven cents dozen, bread was eight cents a loaf, and gasoline eighteen cents per gallon. These prices seemed very high to Arlie Clarence and Ethel Rose Brown. The Brown’s and all of America were coming out of the great depression. On October 22, 1932, their family had just become a family of 5 and what was to become a family of eight. This new arrival number 5 was born 5 years to the day from the last of the first 4 in the family and since I was the new kid in the family I received much attention and love from the four older children. In those days, in the Ozark Mountains nearly everyone was called by their first two names as Margie Lee, Lowell Lavern and in my case; I was named by the family as Billy Dean. This stuck and was used by family, friends, and classmates up until high school when I thought the Billy part of the name was a bit sissy primarily because there was a girl in school who was named Billie Ruth. I, at that age, wanted to be a little more of a macho guy and requested my family call me by my middle name. The name Dean has been my favorite and the way I officially conduct business even to this day.

In those early days, we children learned to work together as a team. We watched over each other, worked together, supported, and encouraged each other in the family just like a successful sports team would do. It seemed all right for us to argue or fight among ourselves as long as mom and dad weren’t around, however, no one outside of the brother and sister circle dared to pick on a sibling or they would have the other seven highly involved in the fight. Eight to one odds usually corrected all challenges.

There were no jobs, no money; we were very poor mountain folk. In other words, we were “Big on Love and Short on Money”. We lived on a 155 acre farm which my dad purchased for $500 but wasn’t able to pay for it until much later in life. Nearly everything needed, with the exception of coffee and sugar, was grown on the farm by the family. Wheat and Corn was taken to the mill to be ground, and with no money to pay the mill operator, trading a portion of the ground wheat flour and cornmeal was the accepted practice to pay the operator for his services. The flour and cornmeal supplied the daily and yearly ingredients needed for baking biscuits and corn bread. A one acre garden supplied potatoes, beans, onions, lettuce, tomatoes and all the vegetables needed for our large family. Fresh vegetables for the summer season and large amounts of canned vegetables went in the cellar to take the family through the fall, winter, and spring months. Milk, eggs, and meat were present by growing animals on the farm. Pork was the main source of meat because it could be smoked to preserve it making it safe for consuming throughout the year. The processing of the meat was done by family members on the farm. Potatoes were put in a hand dug trench three feet deep sprinkled with lime then covered with straw followed by soil. This method of preventing the potatoes from spoiling during the winter months worked well for the Brown family.

Let's Build It Together
The simple phrase, "Been there and done that," best describes the amazing journey Dean Brown has travelled throughout his entire life. Always starting on the bottom rung of the ladder, Dean, a visionary has used the turning points presented in his memoir as a road map, which has been responsible for elevating him to the top level in each of his endeavors.
Deans present undertaking is to build the world's largest walk-through Cross in an effort to save the heart of our nation. The Branson Cross will be a free attraction for people around the world to relive "THE GREATEST STORY EVER TOLD…THE LIFE OF JESUS CHRIST ON EARTH".
The Branson Cross is within a day’s drive for one third of the U.S. Population. There are currently 200 tour buses per month and 8 million people per year that will pass the foot of the Cross. The Branson Cross is a non-profit organization and is being built through generous donations. All donors are permanently recognized with their personalized inscriptions on bricks and pavers. Additional recognitions are available for larger donors and those special donors will be permanently recognized in and around the Branson Cross.
What would you invest in if you KNEW you couldn't lose and that the AUTHOR/CREATOR of Everything was backing you with all of Creation?
www.BransonCross.com

You will find Turning Points not only compelling, but achievable and, most importantly, actionable in your life. Dean Brown is a 32nd degree Mason, a Shriner, a Kentucky colonel, and a member of the Alpha Tau Alpha Honorary Society. He has achieved prestigious awards over the past half century—three times elected a member of Who’s Who in Insurance and Who’s Who in Finance and Industry. He was profiled as one of the most Notable Americans of the Bicentennial Era. He has received a Men of Achievement Award and is a recent recipient of the Biographical Roll of Honor. Dean served his country overseas and earned Top Secret clearance with the United States Army.