Five for the Trail 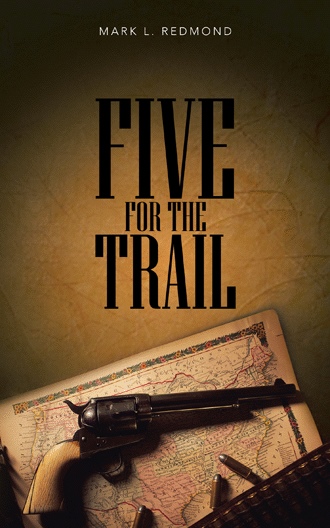 Doctor Joseph Thomas Greenwood pulled a blood-speckled sheet over the face of Dave Yochim and looked into the tearful eyes of Dave’s young widow. “I’m sorry,” he said.
“Don’t be,” she said. “You’ve nothing to be sorry for. Only God could have saved Dave.” She took a deep breath and straightened her backbone. “Thank you for your help. I need to go to my children.” She stood silent for a moment, looking at the floor. Then she raised her eyes to the doctor’s face. “Joe, I’ve never made funeral arrangements before –”she buried her face in her hands and began to sob.
Circling the body, the doctor stood beside the grieving woman and put a comforting arm around her shoulder. “I’ll take care of the arrangements, Laura; don’t you fret.”
He stood in the doorway and watched her take another deep breath before she stepped off the wooden sidewalk and crossed the dusty street toward Mrs. London’s boarding house. Her children, four-year-old Linda and six-year-old Billy, had been taken there after the shooting.
“Yes, Ma’am,” he said softly. “I’ll take care of the arrangements.”
Later that night Doc Greenwood sat at a small table in the room above his office. He propped an elbow on the table; and with his chin resting on one hand, he looked at the quiet, empty street below. “It makes no sense,” he said. “They had no reason to kill him.”
Dave Yochim had been liked by everyone who had known him. He had loaded his family in the buckboard that morning and driven the six miles from his small ranch to celebrate a successful cattle drive and to pay off a loan at the bank across the street. He had planned to pick up some supplies at Johnson’s Dry Goods Store and then treat his family to one of Mrs. London’s delicious meals. He hadn’t planned on walking into the bank while Joshua and Jonathan Riddle were robbing it. According to the bank’s president, Dave hadn’t even reached for his gun. Joshua Riddle had just shot him out of meanness. Then as he had taken the money from Dave’s body, Joshua had smiled. Jonathan, the younger of the two, had cursed his brother, but the damage had been done. They had stuffed the money into their saddlebags and had galloped away before anyone had had a chance to react. Dave had been dead before he’d hit the floor.

For nearly twenty years, Mark L. Redmond had been telling stories about the old West to young readers. Finally he’s turning his attention to “big kids.” Here’s a collection of some of his best stories, including three that were unpublished until now. Redmond’s stories are not typical tales of shootouts and quick draws. In his unique way, he has created some delightful characters who choose to outsmart their opponents instead of out-shooting them. Redmond is the author of the six-book middle grade series, The Adventures of Arty Anderson (Sword of the Lord Publishers, Murfreesboro, Tennessee). His story “The Spittoon” was a finalist in the 2010 Moonlight Mesa competition; “The Switch” appeared in a storyteller’s edition of Grit magazine; and “The Reward” was published in Elbow Creek. Mark and his wife Susie are workampers. They live in a motor home and work in camp resort parks from Indiana to Arizona. Together they have six children and nine grandchildren.

Mark L. Redmond taught high school English for almost thirty years. He has written more than twenty-five articles and short stories, as well as a six-book middle grade fiction series. Although he has lived in the Midwest for most of his life, Redmond’s research has taken him to many of the western states. He belongs to the Single Action Shooting Society and to Western Writers of America.