Messages from the Small Country Church

Readings, Sermons, Observations, and an Invitation to More than Just Donuts! 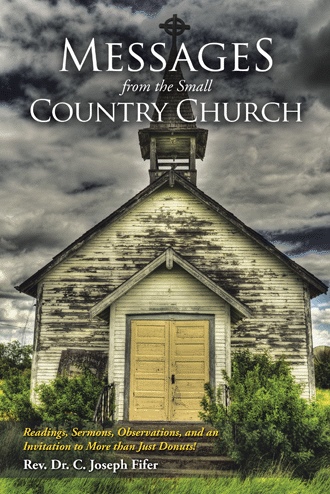 Preface
I came into my small office through the back door of our little church and checked the phone messages as is my routine. As the calls scrolled by and I was prepared to write, a message came across from a large hospital just outside our area. The nurse reported that one of our congregants had been admitted to the cardiac unit, and then gave her name, room and bed number. I didn’t recognize the name, not even from the area, so I called the hospital to let them know that we did not know the patient with the intention to go through their chaplain service to locate the patient’s home church.

I was transferred twice after finding they had no record of the patient there; finally, I spoke to a floor nurse and explained that I was calling to correct the error in the reported church and that we did not know the patient. She took the time to tell me that the patient had been there but had been discharged to go home (Thank God). But then she added something that struck me; she said, “Maybe she comes to your church and you just don’t know it.” Having settled into this “little church” that I serve, and feel the kind of “kinship” that Christ calls us to within His Church... I was taken aback!
Could we possibly have this expectation within our churches today? That we could, or even would come (go) and remain anonymous? If so, then aren’t we failing? After all, isn’t it impossible to “love” anonymously? Have we gotten so big, so automated, so “connected”, that we only expect to just be a number within the collective? I don’t believe that Christ has called you to have a personal relationship with Him in order to put you in “your” place as just one amongst many. He has called you to take your place with His few.
Don’t get caught up... “for Wide is the gate and broad is the way that leads to destruction, and there are many that go in by it.” (Mat 7:13) NKJV

...because, actually you are called out... “For I know the thoughts I think toward you, says the Lord, thoughts of peace and not of evil, to give you a future and a hope. Then you will call upon Me and go and pray to Me, and I will listen to you. And you will seek Me and find Me, when you search for Me with all your heart.” (Jer 29:11-13) NKJV
...and called to a different path! “Because narrow is the gate and difficult is the way which leads to life, and there are few that find it.” (Mat 7:14) NKJV

So, as we are on His path, narrow and difficult (but filled with joy, grace and love) shouldn’t we at least know the others that are sharing this narrow path? I realize we can’t truly “know” everyone until we make it to the end (the beginning), but certainly we should know those around us who are on it. Say for example, those who come to worship in the same place in the same manner as you do. We are gathered to the church through Him, with Him, and in Him, in the unity that would require us to at least know the other’s name. If this is missing in your experience, I dare say you are missing much, much more.
We are called together in order that we can properly, and powerfully witness and serve. First to God, then to each other (which serves God), and then to the rest of the world (which serves God and each other). In order to do this, we must first be known (to each other).
I invite you to come and be “known” in the assembly. Come and be the called person that Christ has done all of this for. Seek Him and the relationship that He offers and then, come to church to celebrate this wondrous thing and share in the life that only He can provide. And when you seek a church to do these things, look to the small church that continues still today to preach and teach and provide in the most personal ways of Christ.

In this day and age of “bigger and better” or “bigger is better,” even our churches are starting to follow suit. The alarming trend that is occurring now in America is the assumption that if a group is big, it must be right; if a church is bigger than others, it must be even “more” right.

This assumption is not correct. This nation was built and became what it is today one small church at a time.

Many of those small churches are still there today, right where they were first necessary. And they are still necessary today. They are still occupied by Christians who meet on every first day of the week. They gather to give the first of their week to worship He who is to be first in Spirit and in truth.

With this book—a compilation of readings, sermons, observations, and an invitation—the Reverend Dr. C. Joseph Fifer (Pastor Joe), who serves a small country church in rural western Ohio, seeks to give voice to the message that millions are now missing.

The Reverend Doctor C. Joseph Fifer holds degrees in theology, ethics, and divinity. He is an ordained minister of the Christian faith and served as the called pastor to a small country church in rural Ohio and now serves in rural Alabama. Like many pastors of small churches, he has spent a lifetime and more than one career gathering true life lessons to bring a real-life understanding to the pulpit. His expository preaching through these lessons has made his teaching worth exploring and experiencing.

With a sense of duty and a call to serve, Pastor Joe began his career in the enlisted ranks of the United States Marine Corps. Later, he became a police officer in southern Florida where he and his wife raised their family; he commanded a major narcotics unit, among other duties, and then retired in order to serve the higher calling of the Lord that was always present but is now more personal and intimate.

Raised Roman Catholic, reformed Lutheran, re-reformed Evangelical Lutheran, and then trained in the Lutheran, Wesleyan, and Evangelical traditions, his claim is now Christian, and his call is to Christ. His belief and focus is that religion and faith, even our corporate expression through worship, is best practiced and most effective in the intimate setting of real love and fellowship found in small churches. This fellowship grows between the Pastor and the people, and the people as the church, all bound in Spirit and in truth.