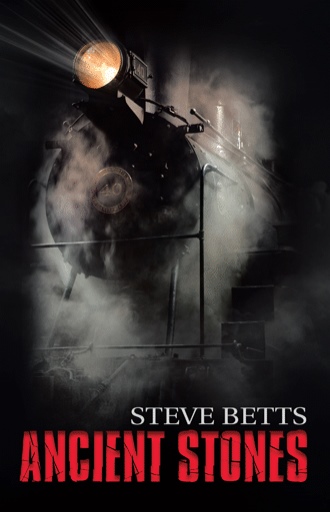 The night was quiet with the only sounds being an occasional bird or insect. All three kids calmed themselves, caught their breath, and remained motionless. Off in the distance they could hear the sound of cars on Highway 21 and a lone train whistle. Alex looked down and noticed what she was standing on. It was solid, but more substantial than a fallen tree. "Hey, guys, look." Lucian knelt down to look closer at what Alex was pointing. He could see the remains of the old railroad tracks partially buried in the leaves of the forest. The train sounded its whistle, again, somewhere in the distance. "Lucian, I don't want to do this anymore. It sounded fun when I thought it up, but I wanna go home now," Kristal whimpered. The train blasted the whistle noticeably closer. Kristal gasped and asked, "Do we need to get off the tracks? Are we gonna be hit by the train?" Lucian answered back in an annoyed voice, "No. These rails aren't used anymore. See, it's got really big trees growing up right in the middle. I bet these tracks haven't been used in close to 100 years." The train blew the whistle for a fourth time, even closer. They could now hear the chug-chug of the steam engine. The rails they were standing on began to shake and vibrate. All three kids looked into the now dark woods as a bright light shined in their direction. The sound of the train had become so loud that even Lucian was beginning to think they might need to move. The rails were shaking so hard the kids could no longer remain balanced while standing, and as a group, began running toward the Engine House. By evidence of the noise, light and vibration, it was obvious that a train was coming down the tracks toward them. How this was possible, Lucian couldn't decide. As they rounded the corner to the front of the structure, they peered through a lone window as a large, black, steam engine pulled into the ruins and gave three blasts from its enormously loud whistle.

The Dawsons have decided to take an impromptu camping trip since their parents are out of town. When the park closes at 8:00 p.m. and the sun sets, ancient residents make themselves known, and the three children are thrust into a supernatural world where their eternal freedom is at stake.

On a late September afternoon, three teens embark on a weekend of relaxation only to find themselves engaged in a supernatural struggle against an evil that seeks to take them captive for eternity.

Steven Betts received a BS in English from Drury University in Springfield. His book is written about a specific location in Southeast Missouri called Elephant Rocks State Park that he has visited at least once every year since infancy.

In May 2012, he and his daughter, who was twelve at the time, were spending the day there with the church youth group. They conceived the premise of the story while walking on some old, abandoned railroad tracks. Three months later, he began writing Ancient Stones.

Steven currently lives in Rolla, a small town in South Central Missouri. He teaches high school special education, coaches football, and pastors a local church. He is married and has three children. Kristyn is thirteen, Dalton is four, and Meredith is two.